Celebrate the Nadaam Festival like a local and watch and learn about the games with the professional wrestlers and archers.. Stay in tourist Ger Camps along the way – these are cosy, funished traditional tents.. Travel across the vast expanses of the Gobi Desert and see its ‘Flaming Cliffs’. Discover Mongolia’s rich cultural heritage, from the country’s original Buddhist temple to the city built by Genghis Khan

The colourful history of Asia hangs brightly on Mongolia’s sleeve, from ancient times through to the rise and fall of communism. Alongside the temples and museums is a surfeit of natural and human wonders – the singing sands of Khongoriin Els, the dramatic landscape in Khustai National Park, and the exciting Nadaam Festival! 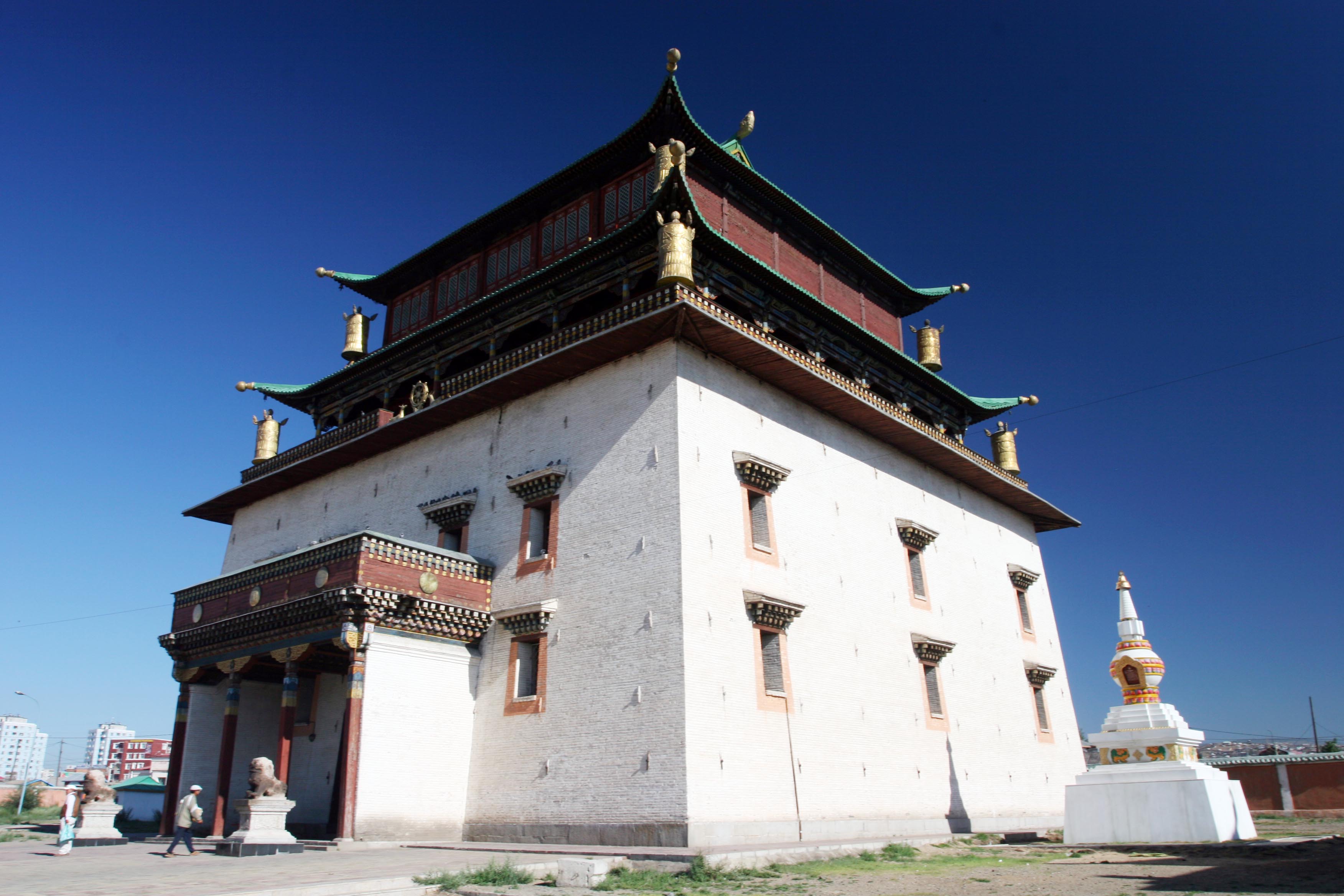 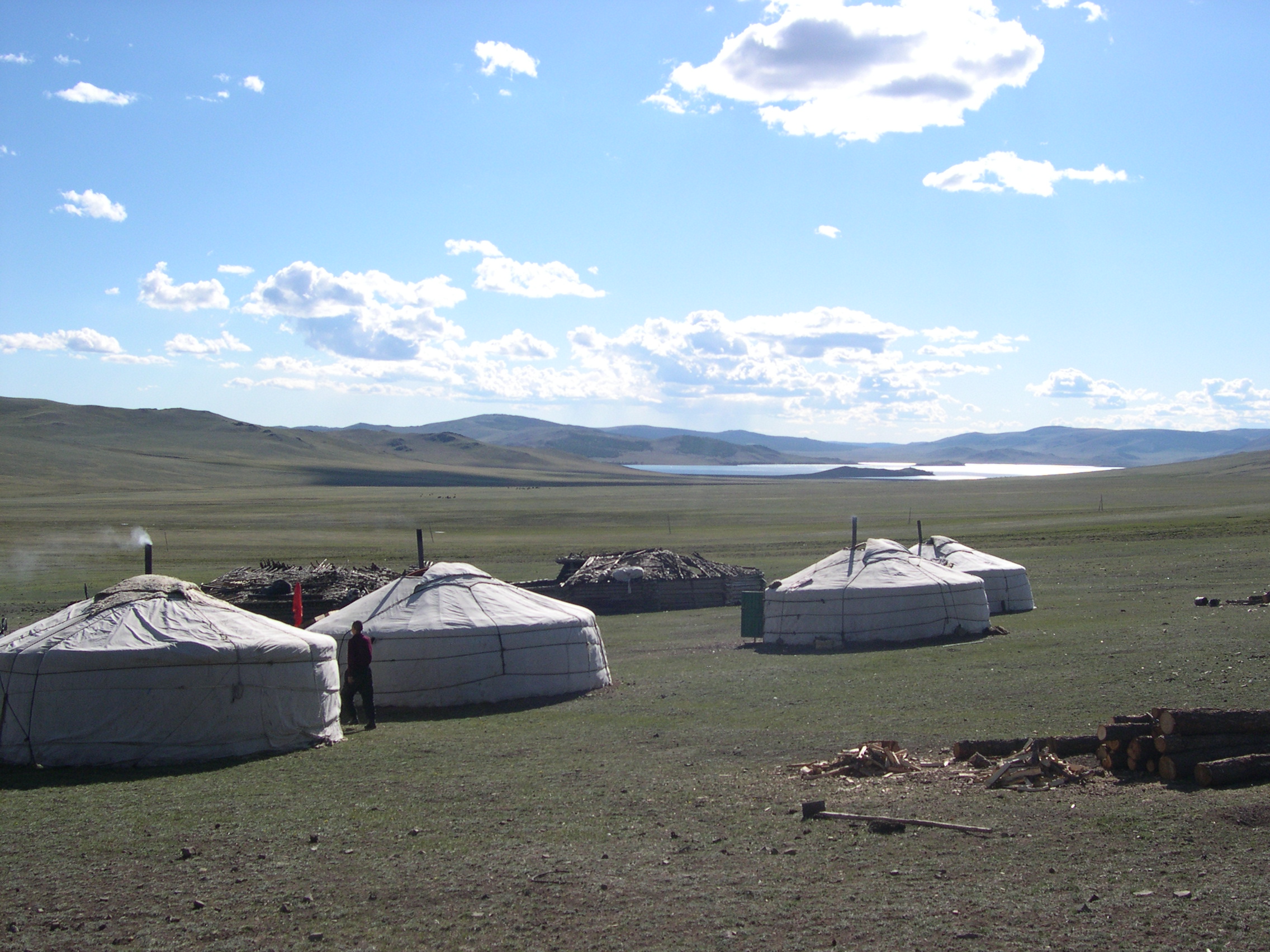 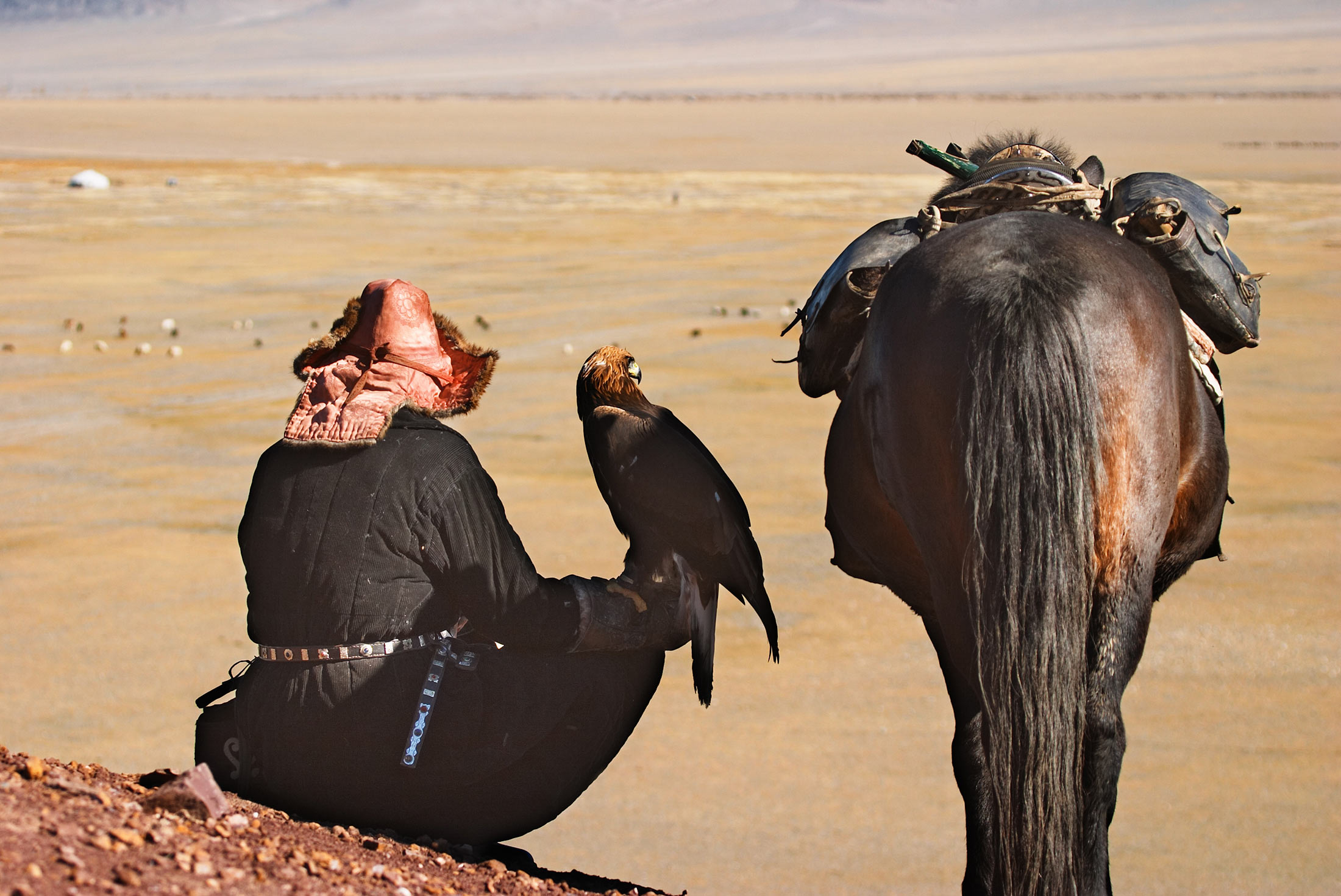 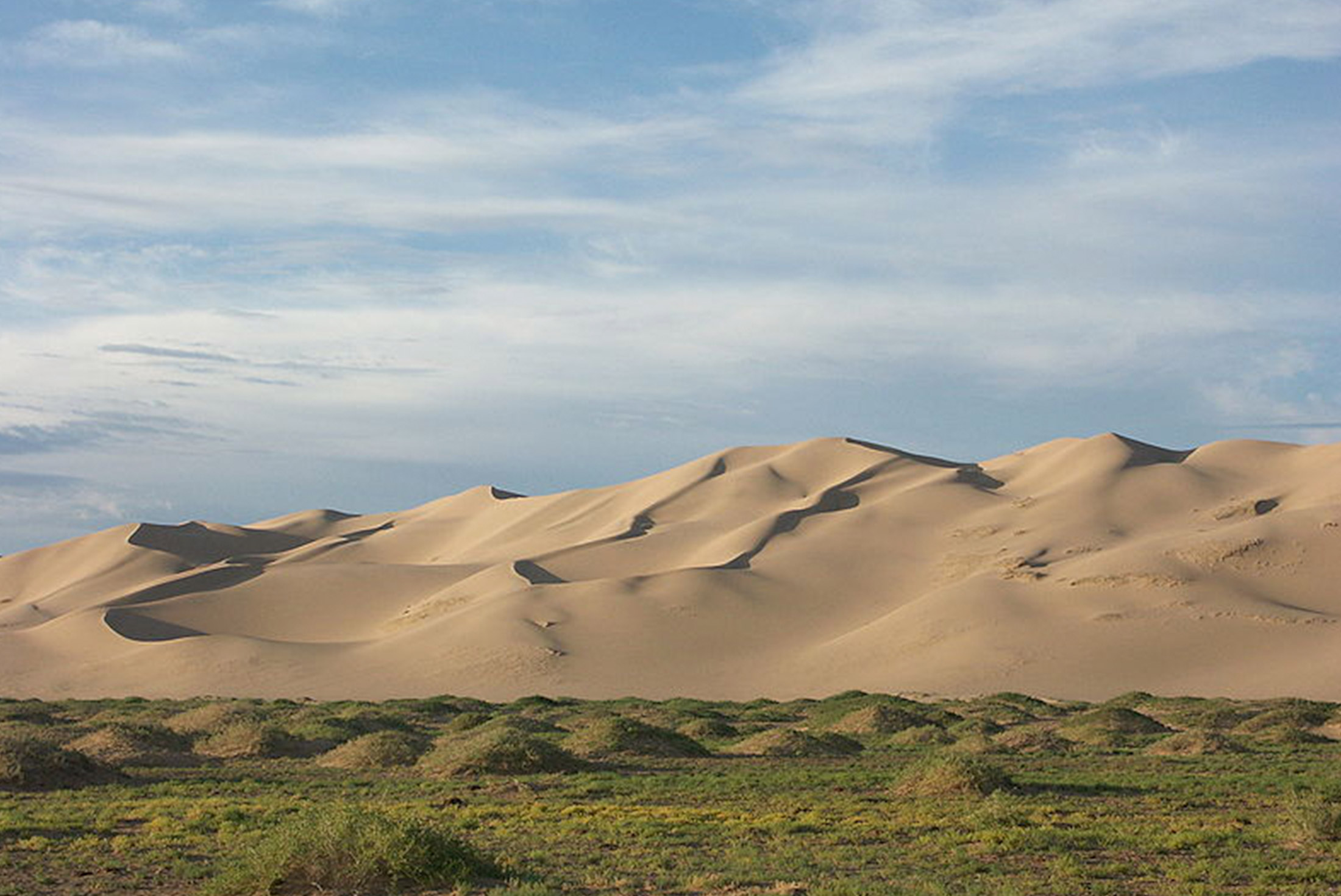 Sainbainuu! Welcome to Mongolia. Crammed between the superpowers of Russia and China, the independent nation of Mongolia is a true Peregrine destination. The capital, Ulaanbaatar (affectionately known as UB), is a city where you’ll find elderly Mongolians in traditional dress, business suit-clad entrepreneurs and young monks. Make sure you arrange a flight to arrive in time for your important welcome meeting at 6 pm, where you’ll meet your group and leader. Your leader will also be collecting insurance and next of kin details during this meeting, so please be sure to have these on hand. If you arrive early, perhaps explore one of the city's many museums to learn about the country's turbulent history, including the reign of the most famous of Mongolian historical figures – the feared and respected Genghis Khan. One of the most fascinating is the Intellectual Museum, where you can learn about the history and culture of this intriguing country through puzzles, toys and magic tricks. After the group meeting tonight, you have the option to join your fellow travellers for a dinner at a local restaurant chosen by your leader.

After an early breakfast, take an approximately 90-minute flight south to the Gobi Desert. Land in Dalanzadgad, a provincial centre and a corner of civilization in the heart of the desert. Here you’ll be welcomed by your local drivers, who will be with you for the next few days. Japanese minivans will be your transportation for the duration of the trip. Begin your desert exploration by heading out to “Vulture Canyon” (approximately 1 hour). This is a striking oasis of canyons and gorges deep in the desert, where the high cliff walls create a microclimate that attracts wildlife from all over Mongolia. The canyon is lined with ice almost year-round, and you’ll take an afternoon hike to explore a gorge and capture some beautiful pictures of the stunning Gobi Gurvan Saikhan Valleys. This evening you’ll spend the night in the national park at a ger camp, surrounded by endless desert.

Rise and shine for a 4-hour drive to the largest and dunes in Mongolia, known as Khongoriin Els or the ‘singing sands’ by the locals. These behemoth dunes stretch for over 100 kilometres and can reach up to 300 meters in height. If asked to imagine a quintessential desert, this is what springs to mind. Sweeping, wave-like patterns of sand framed by a bright blue sky and lit by a relentless sun. The dunes’ nickname comes from the sound produced by small avalanches of sand on a windy day, and the noise has been likened the distant hum of an aircraft propeller. After you arrive you’ll check into your ger camp and enjoy lunch in the new surrounds. In the afternoon, visit a nomad family, see what a nomad ger is like and hear about their life on the Gobi. Then, it's time to explore the dunes on foot and enjoy the stunning sunset view of the Gobi desert

This morning you'll tackle the sand in a more traditional manner. Climb aboard a two-humped Bactrian camel to navigate the dunes, like the nomads of past and present. It may help you to understand the practical and spiritual importance of these animals for Gobi nomads. The rest of the day is free for you to spend as you wish. Maybe do some more walking and hiking, or simply sit back at the camp and take in the incredible views.

Continue through the desert today onto the Flaming Red Cliffs, also known as Bayanzag or sometimes Bain-Dzak (approximately 4 hours). The area is best known for being the first ever site where dinosaur egg nests were discovered, back in the 1920s by a palaontologist who also coined the fiery nickname. This section of the Gobi Desert is considered a palaontologist’s paradise. Here you will walk the labyrinths of rock and hard sand – don’t be surprised if you make your own dinosaur discovery. There are fossils practically bursting out of the cliffs, as there aren’t the local resources needed to excavate them all. Bayanzag means ‘rich in saxauls’ (a type of shrub or small tree), and you might visit a saxaul forest nearby. These saxaul plants help to stabilize the active sand dunes and reduce the effects of sand storms. When the sun begins to set the colours of the cliffs can transform into a stunning mass of glowing fire, hence the label. Continue on to your ger camp, learn a few tricks of archery.

After breakfast you’ll return to Dalanzadgad (approximately 1.5 hours) and then take a 90-minute flight back to Ulaanbaatar. The remainder of the day is at your leisure. Take some time to explore the city, perhaps visit Mongolia’s largest and most important active monastery, the lively Gandan Khiid, to learn about the main religion of Mongolia – Tibetan Buddhism. Enjoy a fascinating culture show in the evening, including the mesmerising throat singing.

Drive to the centre of the country and the ancient capital of Karakorum (approximately 5 hours), built by Genghis Khan in the 13th century. Be sure to ask your leader and drivers to tell you some stories about this legendary figure on the way – he’s the nations' hero after all. The city was the capital of the Mongol Empire for a short time 800 years ago, built after Khan used the area to gather his troops for the invasion of China. In Karakorum you’ll visit the first Buddhist centre of Mongolia, the impressive Erdenezuu Monastery, dating from 1585. This is an immense walled compound which retains much of its former glory. Inside you can inspect the three temples dedicated to the three stages of a Buddha's life: as a child, an adolescent and an adult. Continue your education in Mongolian hospitality with another night in a ger camp.

Drive to Khustai National Park (approximately 4 hours) today and arrive at your ger camp around midday. The park is a typical example of the Mongolian steppe landscape – vast empty spaces and dramatic mountains in the distance – and the Tuul River, one of Mongolia’s largest, runs through it. The park is also home to the Przewalski (Takhi) horse, a rare and endangered subspecies of the wild horse native to Mongolia. The country has a love-affair with the horse – Mongolians are known as the best riders in the world (and even have more than 500 words to describes horses’ coats) The park is the home of a highly successful horse reintroduction project. The takhi species was extinct in the wild in the 1960s, but has returned to its native habitat since the 1990s. Here you’ll visit a small museum run by the Takhi horse reintroduction project. In the afternoon, embark on a wildlife hike in the national park with a local guide, who'll introduce you to his work and inform you about the park and its flora and fauna. Enjoy your stay in the ger tonight.

Today, travel back to Ulaanbaatar (approximately 2 hours). Before going back to our hotel, enjoy a half-day city tour in order to get to know the area better. This will include visiting Zaisan Hill, where you can look out across the city and visit the Winter Palace of the Bogd Khan. In the afternoon, walk down to the main square to enjoy the Deeltei Mongol, a parade of elaborate, traditional garb.

Get into the festival spirit and embrace the biggest Mongolian national festival with the locals! The ancient Greeks may have the Olympics but the Mongols have Naadam. Mongolia’s annual circus-like festival is a centuries-old tradition that dates back to the era of the Khans and their dynasties. Wrestling, archery and horse racing — the three skills that Chingis Khan considered essential for any Mongol warrior — are showcased at the country’s largest celebration of the “three manly sports”. Enjoy a relaxing morning and before making to the central stadium. While it's only about 30 minutes by bus, but may take longer due to heavy traffic. The ceremony kicks off at 11 am with a performance featuring floats, costumes and dance. Wrestling, archery and ankle bone shooting tournaments take place in the stadium during the day, and you will have free time to stroll around at a relaxed pace to absorb the festive atmosphere. Later, you will have the privilege of watching the archery and wrestling tournaments with professional athletes who are competing in both competitions. Hear stories from the experts and take plenty of pictures with these local heroes.

In Mongolia, horse racing is not just a sport – it's a way of life and source of national pride. The Khan empire was built on warriors on horseback, and competing in the Naadam races is a great honour. An early start is necessary today to witness the largest and most important race of the festival, the Soyolon. Today you'll watch these skillful athletes wield horses across an unmarked open field and listen to the roar of the crowd as the winners cross the finish line. Return to town for lunch and to relax in your hotel. In the late afternoon, make tracks for the stadium, where you will watch the wrestling finals. Feel the tension build as the athletes grapple in a folk style originally developed by Genghis Khan to keep his warriors battle-ready.

Your Mongolian adventure comes to an end today in Ulaanbaatar. 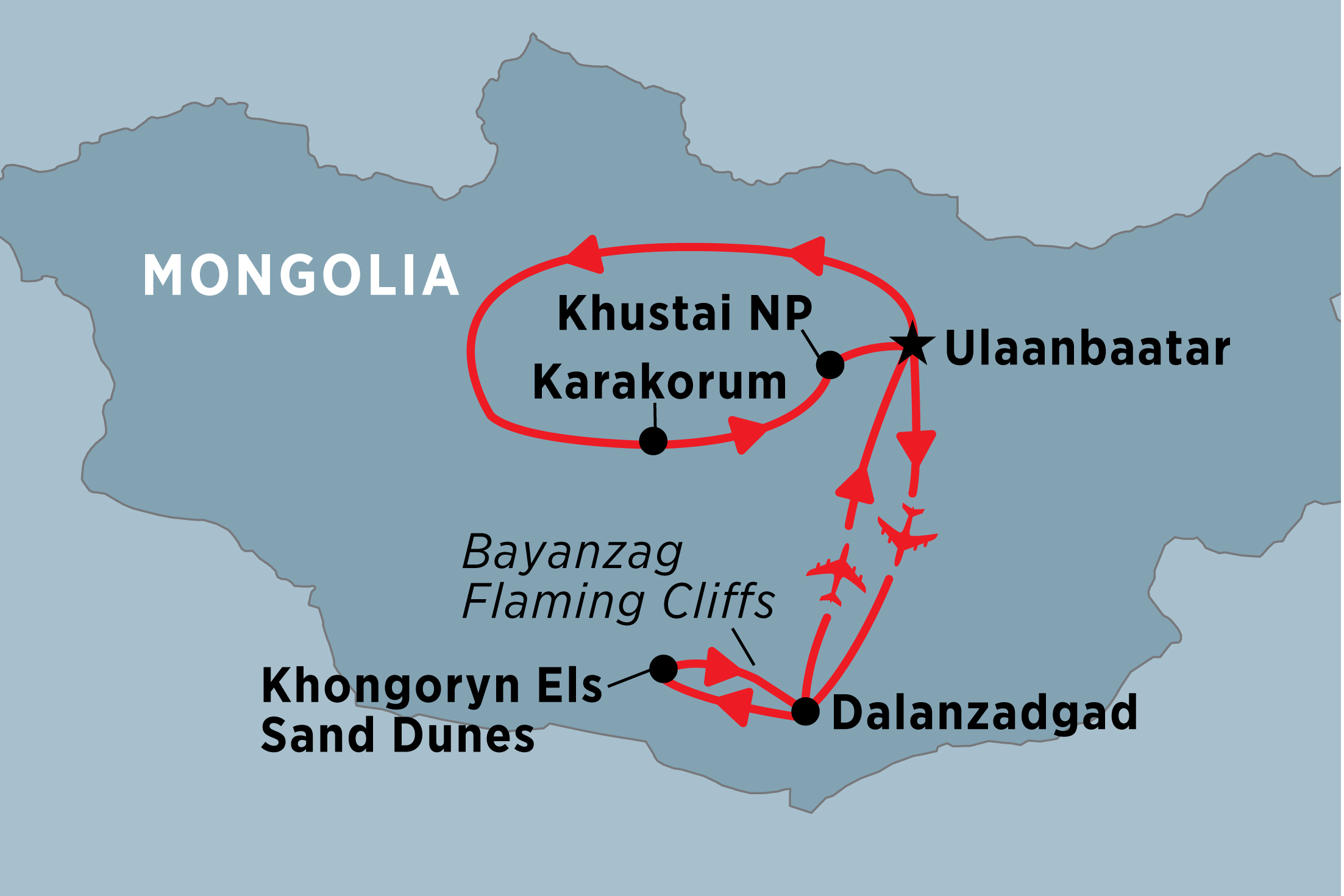