Take in the highlights of one of India’s most laid back and beautiful regions. Seek out wildlife in Periyar National Park. Spend a night on a kettuvallam, our ‘feature stay’ houseboat, in the stunning Kerala Backwaters. Travel to the southern most tip of this vast country when visiting the Vivekananda Rock Memorial

Southern India is a realm of untold natural beauty, exotic spices, centuries-old monuments and captivating local hospitality. Uncover these treasures as you travel through the state of Kerala, discovering the rich green landscape of the Periyar National Park and Wildlife Sanctuary, the hidden waterways of Alappuzha, along with cultural landmarks such as the Mattancherry Palace and the Vivekananda Rock Memorial on your adventure towards the southernmost tip of the country. 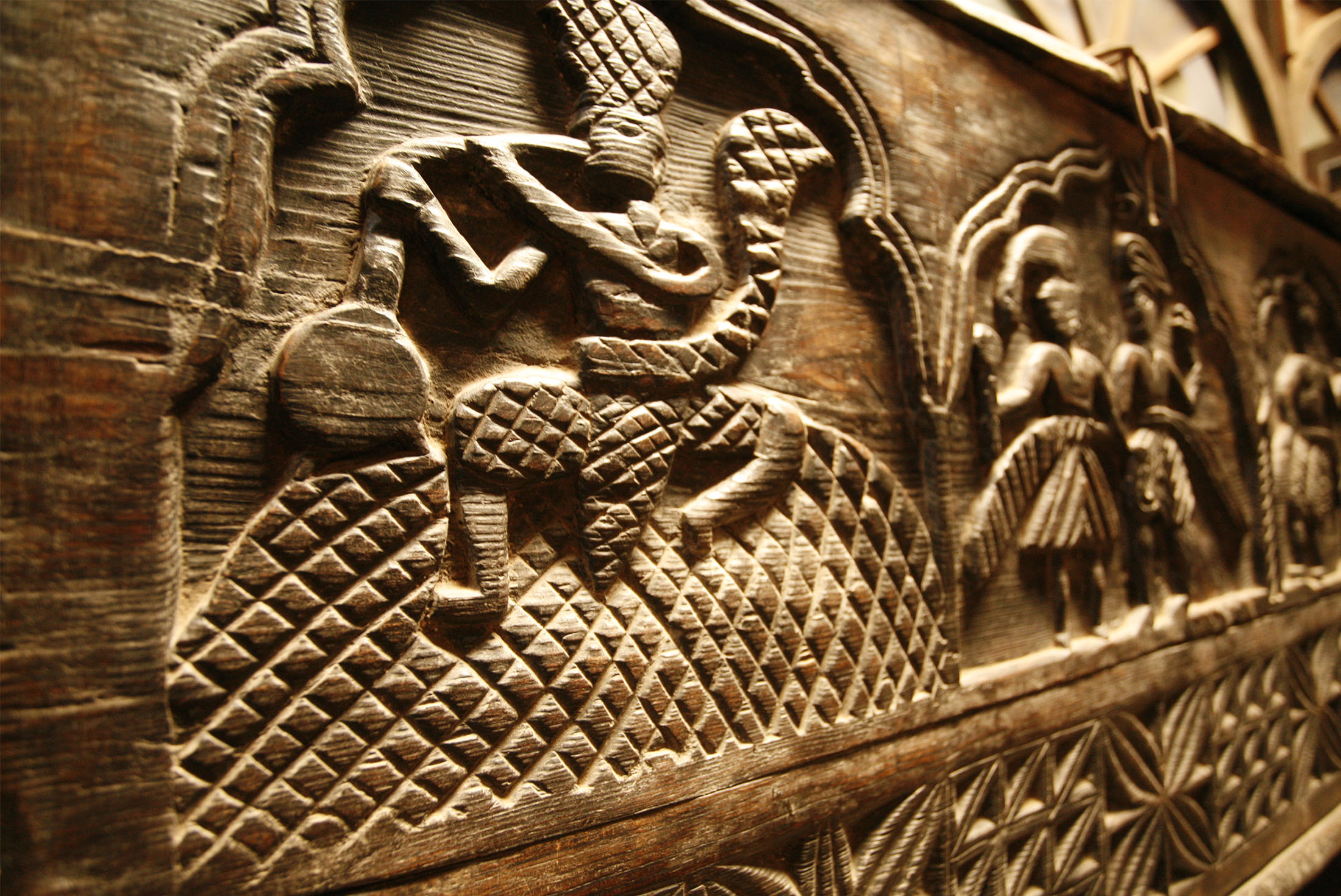 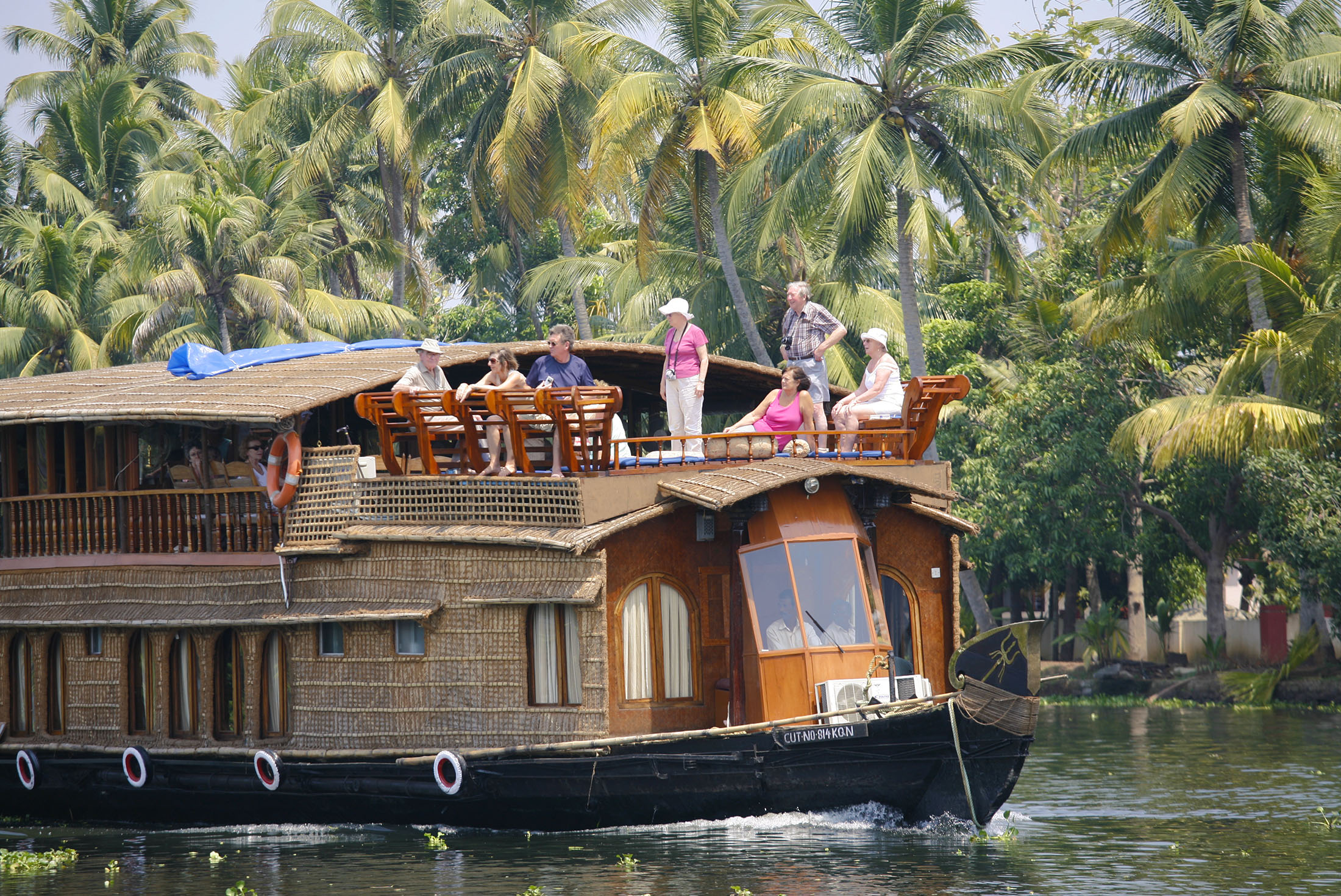 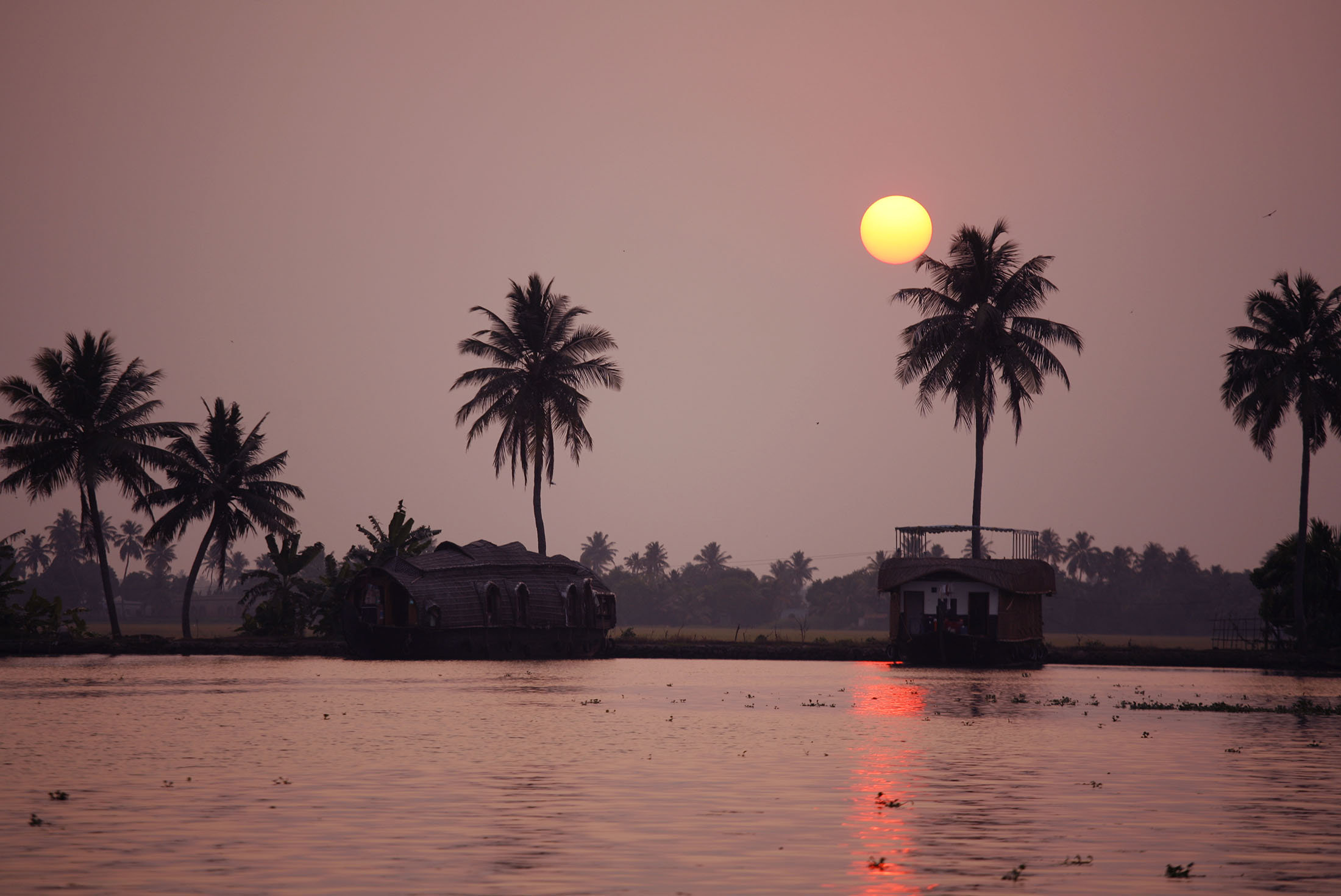 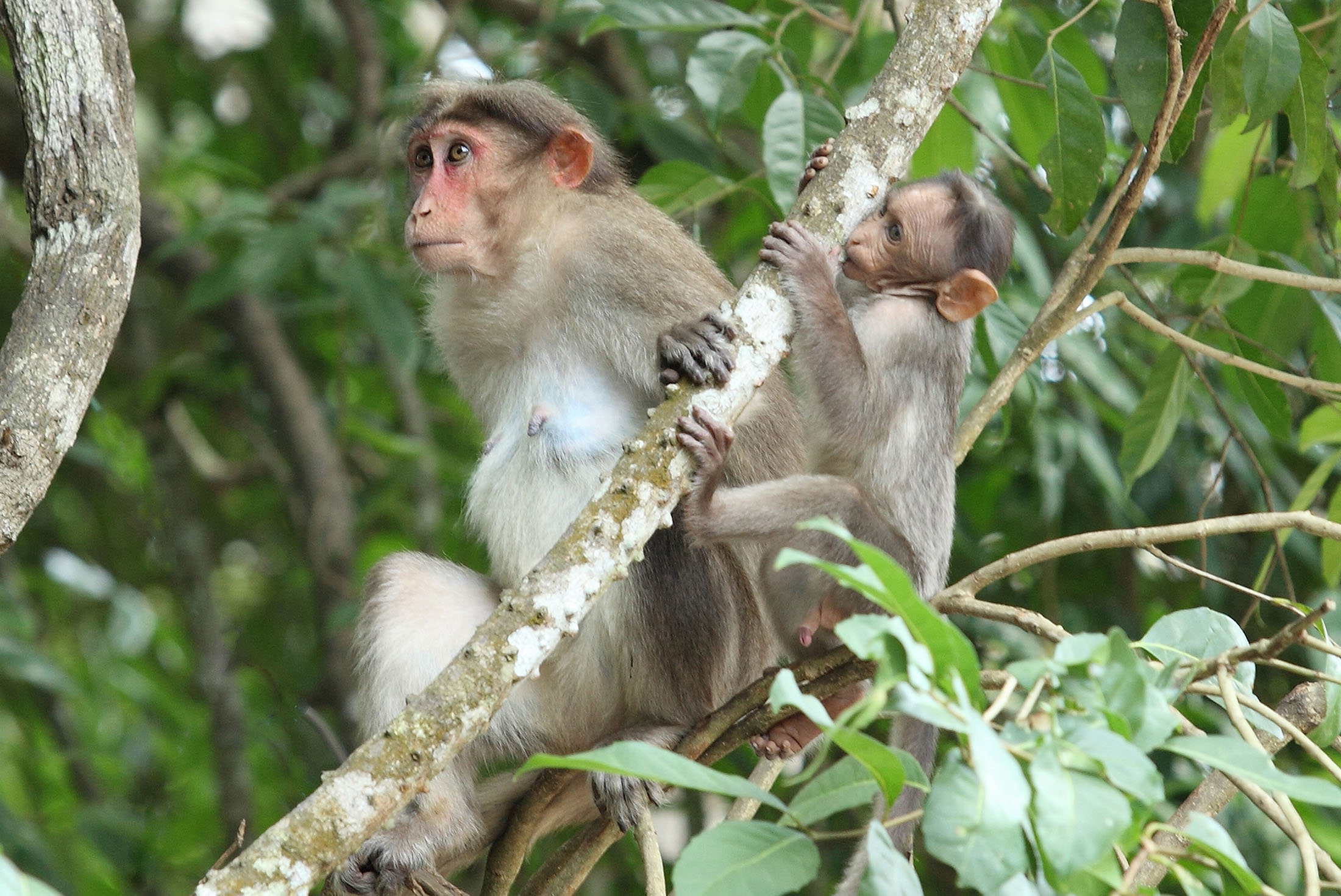 Welcome to India. Your journey begins in Kochi, formerly known as Cochin, a historic port city divided over a small series of islands. On arrival, take some time to relax before attending a welcome meeting at 6 pm this evening. You can also take advantage of the city’s ferry network to go island hopping if you wish, which is widely regarded as a great and easy way to travel around Kochi. After your orientation meeting, consider taking a walk around the beaches as the sun begins to set. For dinner, consider talking to the group leader who can book dinner at the Grand Hotel’s excellent restaurant.

Kochi has been drawing traders from all corners of the world since 1341 ¬– today grants an insight into how this has shaped the city. Begin the day with an included breakfast, followed by an orientation walk to visit the parade grounds, churches and temples around Fort Kochi. After soaking up the city’s Portuguese, Dutch, Chinese and British influences along the way, there may also be a chance to wander amongst the great arching Chinese fishing nets, a true spectacle of the city. Following that, head on for a visit to the Mattancherry Palace, also popularly known as the Dutch Palace thanks to renovations performed by the Dutch in 1663. This historic building was gifted by the Portuguese by the king of Cochin after its construction around the year 1555 and houses portraits of old Kochi royalty along with some of the best mythological murals in India. You can also visit the Paradesi Synagogue, the oldest functioning Jewish synagogue in India, before taking an optional trip to Vypeen Island, one of the most densely populated islands in Kochi. In the early evening, witness one of the most vibrant and extraordinary theatre performances in the world at a Kathakali dance event. This classical and dramatically powerful dance style combines symbolic storytelling with physical technique, and requires incredible commitment, rigorous training and an attuned sense of emotional sensitivity to express the performance’s artistic nuances.

The next part of your journey takes you on a four-hour drive past rubber and pineapple plantations before arriving at the gateway of Periyar National Park and Wildlife Sanctuary. Perched high in the ranges of the western ghats, the rolling green landscape of the sanctuary now serves as an elephant and tiger reserve, originally created to stop the encroachment of tea plantations back in 1934. The foot of the ambling hills surrounding the sanctuary houses a lake formed by a dam built in 1895, serving as a permanent source of water for local wildlife. In the afternoon, take a visit to a local spice plantation for an insight into the farming process, sampling cardamom, pepper, clove, cinnamon, nutmeg and vanilla in the process. There’s also the option of taking an ayurvedic massage, a 3000 year old technique combining oils, music and body work for therapeutic comfort. Afterwards, the option of witnessing an hour long demonstration of traditional Indian martial arts (kalaripayattu) is available at the Kadathanadan Kalari Centre, staged there every evening.

After finishing your breakfast, take a guided nature walk in the morning through the Periyar Wildlife Sanctuary. While wildlife encounters can’t be guaranteed, the sanctuary’s Indian elephants, tigers or guar (the world’s largest species of buffalo) are known to wander the park, so with a keen eye you may get to witness some of these endangered species in their natural habitat. More common to the area are the bonnet macaques, found near the entrance to the reserve, or the Malabar giant squirrel – easier to spot and still exciting to behold. You’ll have the entire day free, so if you’ve missed the chance to take up the ayurvedic massage or kalaripayattu demonstrations, now might be the time. Otherwise, kick back and relax in the natural beauty of the sanctuary.

Once you get ready in the morning, prepare to embark on a three hour trip to the sleepy palm-shaded waterways of Alappuzha (also known as Alleppey). Once a significant trading port, the town is now known for a more domestic relationship between boats and the water. Houseboat cruises along the rustic backwaters are commonplace for travellers to the town, along with attracting people to the famed snake boat races in August each year. Tonight will give you an opportunity to embark on these waters yourself as you travel on a traditional kettuvallam feature stay houseboat. These floating cottages can stretch to over 30 metres (100 ft) long, and come with western toilets, private bedrooms, a dining area and a sundeck for you to relax on while you pass the giant palm trees on the riverbanks.

Once breakfast is done, take a drive to sleepy Kumarakom in the backwaters of Kerala. This cluster of tiny islands sitting on the Vembanad Lake, the largest lake in the state, serves as a bird sanctuary for egrets, darters, herons, teals, waterfowls, cuckoos, wild ducks and migrating Siberian storks as they visit in flocks, fascinating locals and visitors alike. Explore the village with your guide, who will introduce you to members of the local community, giving you a chance to meet and talk with the people who call these areas home. You’ll have plenty of free time for the rest of the day, should you choose to visit the 1000-year-old Thazhathangady Juma Masjid mosque, a local attraction, or simply stroll under the palm trees or weave throughout the rice fields that cover the island. There’s also the option for another ayurvedic massage, if you’re looking for a little extra relaxation.

The next stop of the tour takes you to Kovalam via the capital of Kerala, Thiruvananthapuram, formerly known as Trivandrum and referred to as the Evergreen city of India by Mahatma Ghandi. Kovalam was once a quiet coastal town known for its export of fresh fish and coconuts, but has since become one of India’s most popular beach resorts. You start your journey through the area with an orientation walk, followed by the potential to explore famous forts, temples and palaces in the area. Start with the old Anchuthengu Fort, the first signalling station built for ships arriving from England established by Britain’s East India Company in 1696. If you’re still interested in catching a glimpse of old Indian architecture, wander over to the 16th-century Koyikkal Palace, established for the regent Umayamma Rani and now home to an exhibition that features rare Indian musical instruments.

Prepared to be whisked on an excursion to Kanyakumari, the southernmost city in all of India. Known as a great centre for arts and religion for centuries, the city (formerly known as Cape Comorin) also boasts stunning memorials such as the nearby Vivekananda Rock Memorial, erected in honour of Swami Vivekananda who is said to have attained enlightenment on the rock that sits on an island off the coast of the city. The Thiruvalluvar Statue, a 40 metre (133 ft) tall statue dedicated to the Tamil poet and philosopher, stands next to the Vivekananda Rock Memorial and sets the perfect scene for a relaxing sunset. Once the day is through, travel back to Kovalam with your group and prepare for the last day of your trip.

If there was anything you missed in Kovalam last time, now’s the time to fully explore the area on the final day of your trip, which comes to a formal end once you’ve finished your breakfast. If you haven’t wandered through Anchuthengu Fort, Koyikkal Palace or Attukal Bhagavathy, perhaps do so now, or relax on the water’s edge at one of the three popular local beaches. Lighthouse Beach is home to the iconic Vizhinjam Lighthouse, Hawah Beach features stunningly beautiful calm blue waters and Samundra Beach serves as a hub for local fishers as they go about their business. The evening is yours to enjoy – perhaps join the rest of the group for a farewell meal. You may want to work with Peregrine to organise a departure transfer to the airport at Trivandrum, or you can to your tour leader to book a taxi if required.