Gaze in awe at the towering, wind-swept rock formations at Wadi Rum on an included 4WD adventure, and note how the colours change as the sun makes its way across the sky.. Journey through the desert to a premium Bedouin camp and get to know the customs and cultures of this community before spending the night under a starry sky in your traditional accommodation.. You never forget your first glimpse of The Treasury through narrow canyon walls in Petra. Spend a day taking in its majesty and mystery, and if your dates align, consider booking an unforgettable night experience.. Be treated to traditional Bedouin cooking, like a zarb – a mouth-watering barbecue of chicken, lamb, and vegetables slow-cooked in an underground pit – among other Jordanian favourites on your trip.

Take an inspiring Middle Eastern journey through majestic Jordan on an eight-day Peregrine adventure to its acclaimed sights. 4WD through the sweeping sands and echoing formations of Wadi Rum, discover the larger-than-life facades of Petra on a guided tour and face the ancient Roman ruins in Jerash. On a round-trip journey from up-and-coming capital Amman and with unique accommodation along the way – including a premium Bedouin camping experience – Jordan no doubt proves itself as a destination with a long colourful history and deep-rooted traditions. 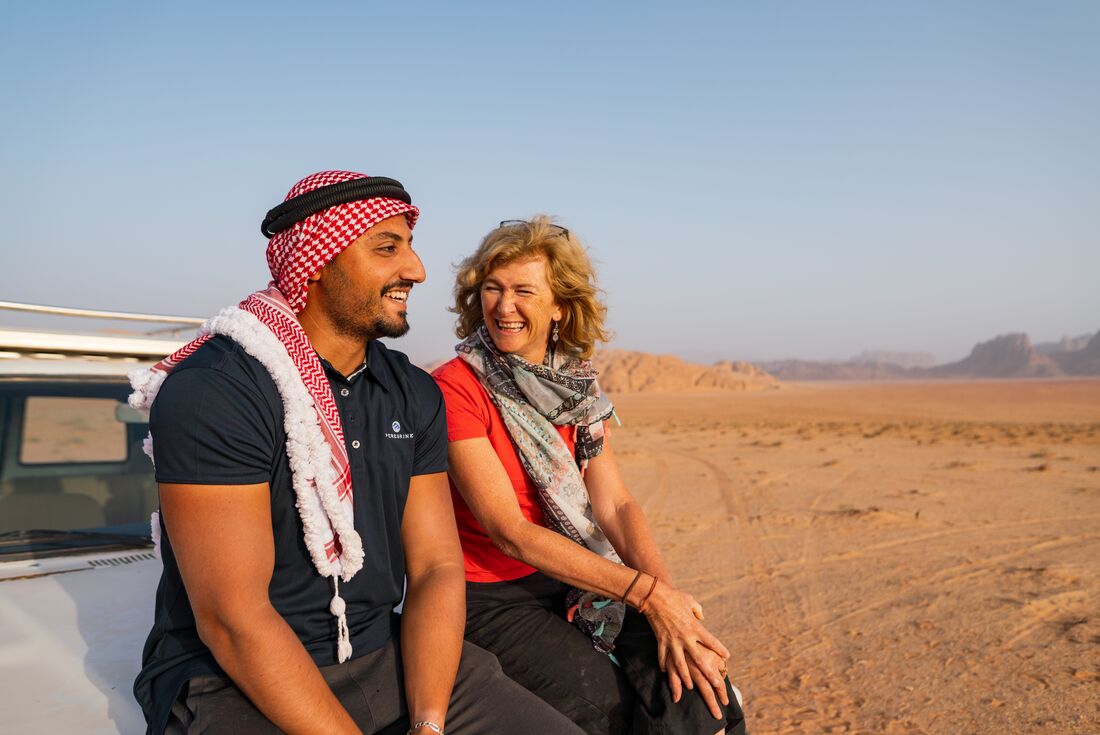 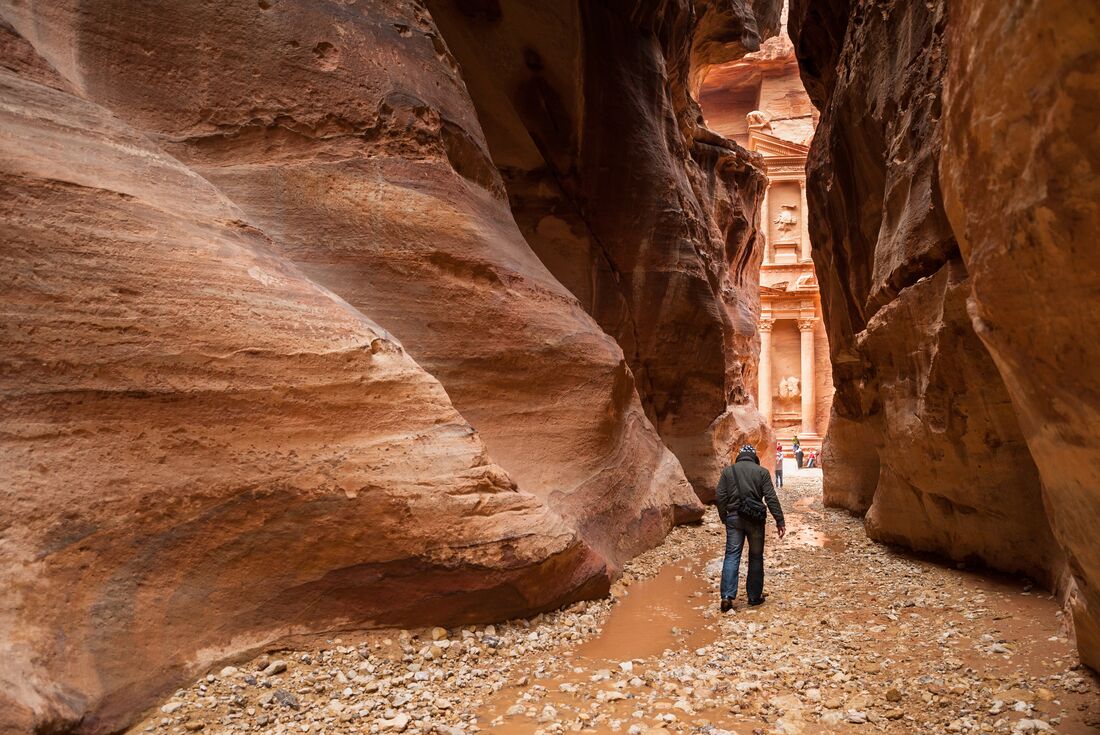 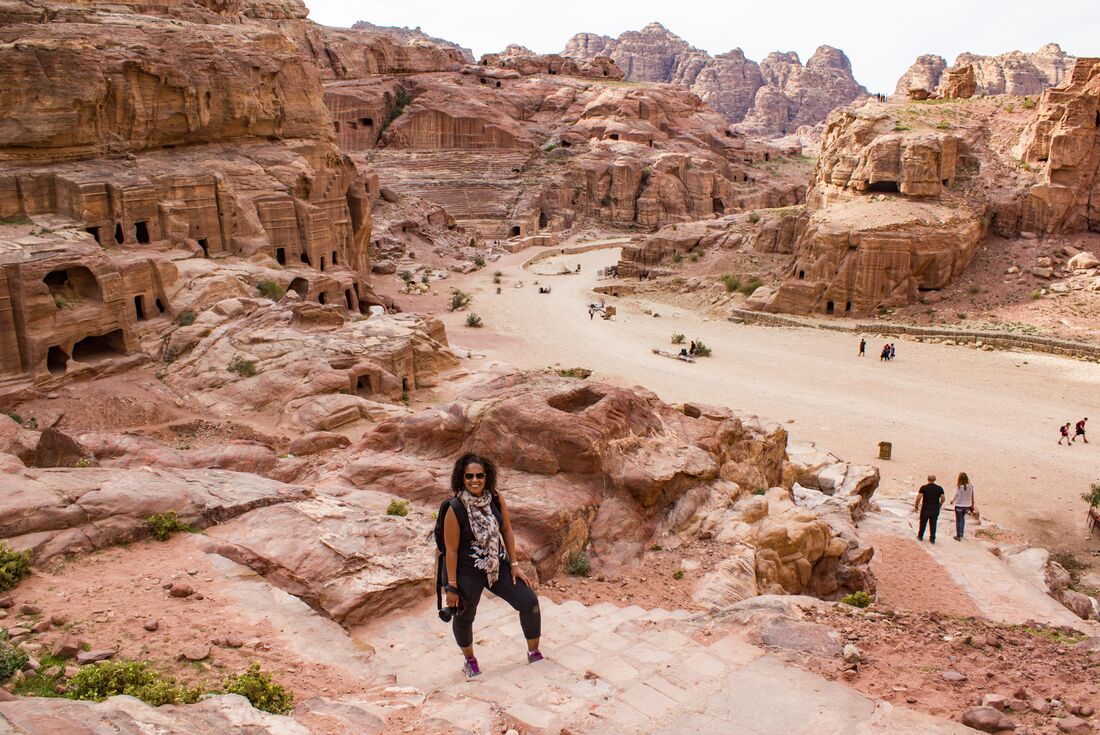 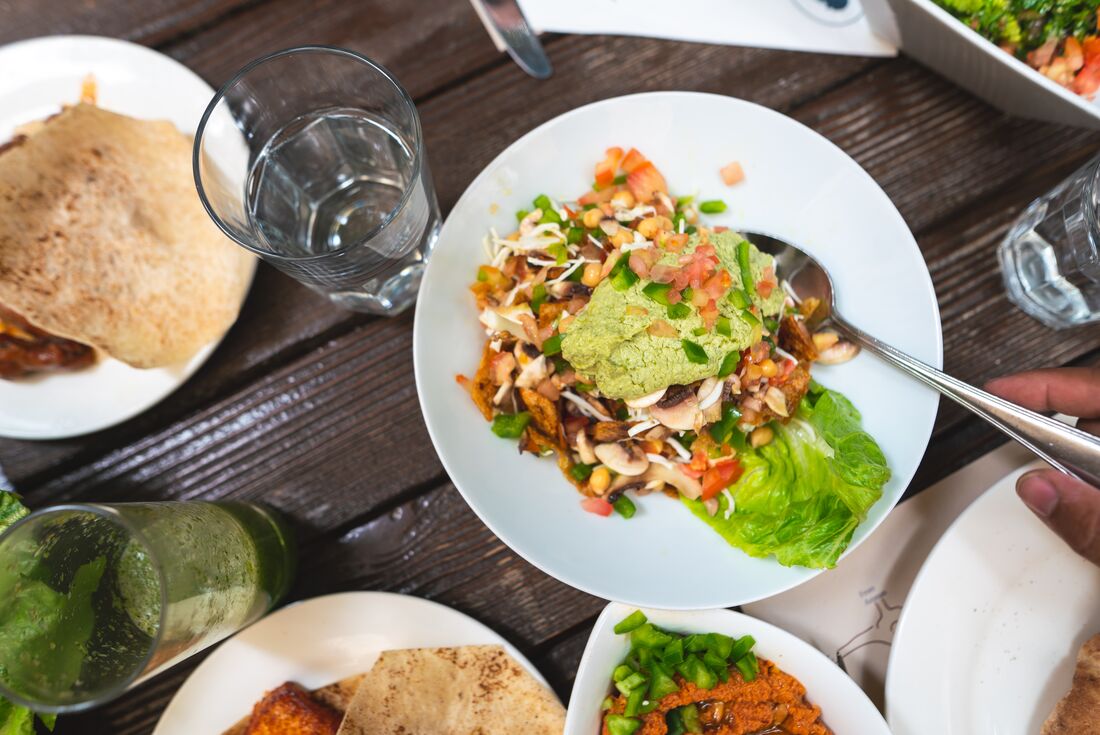 Welcome to Jordan – cosmopolitan and contemporary yet steeped in biblical history. On arrival at Amman's Queen Alia International Airport, you will be met by a Peregrine representative and transferred to your hotel. You are able to arrive at any time today, keeping in mind hotel rooms are available for check-in generally after 12 pm (midday), and there will be an important welcome meeting with your group and local leader tonight. If you arrive early, perhaps take a walk and pick up a coffee and ara’yes – a toastie filled with spiced meats – at one of the cafes. Otherwise, head to the Old Town’s Roman Amphitheatre, find some culture at the Jordan National Gallery of Fine Arts or look down on the city from the hilltop Temple of Hercules.

After breakfast, drive from Amman to Wadi Rum (approximately 4.5 hours). Enjoy some lunch in the small village of Rum and browse the informative visitor’s centre. Afterwards, jump into a local jeep and journey into Wadi Rum with your Bedouin hosts. This region is probably best known for its connection with the British officer T E Lawrence, who was based here during the Great Arab Revolt of 1917 and 1918. Much of David Lean's movie on his exploits, 'Lawrence of Arabia', was actually filmed in Wadi Rum. Visit several of the area’s distinctive rock formations and appreciate the vast silence and spectacular desert landscapes. These landscapes are home to Bedouin communities that live in scattered camps. You will enjoy an evening with them at one of their camps, set in an amazing location deep in the desert.

After waking up in the unique surrounds of your Bedouin camp this morning, take a walk around the area – the length of which depends on the group’s desires – before scaling one of the large dunes to enjoy panoramic views of your surrounds. Afterwards, head in 4WDs back to the main entrance opposite the Seven Pillars of Wisdom – the mountain named after Lawrence of Arabia’s book. The visitor's centre here is also a great spot to buy some jewellery and handicrafts, mostly made by a women's co-operative dedicated to supporting local industries. Continue your journey to the fabled city of Petra (approximately 2.5 hours). On arrival, there is time to check out the town that has grown around the site and to relax, ready for a big day of exploring Petra tomorrow.

Petra, dating back to the sixth century BC, is the jewel of Jordan, the lost city of the biblical Nabateans, an impressive series of tombs and dwellings carved directly into the rock. The iconic view – the Treasury's glorious facade, glimpsed from a narrow cleft known as the Siq – is perhaps the single-most striking sight of the entire region. The Siq leads through the rock and is sometimes only a few metres wide, with walls soaring up to 180 metres on either side. With your guide, explore the old Roman road, amphitheatre and several old tombs. You will also climb up to see the Monastery, providing a magnificent view of the entire site. There is a cafeteria on the site, where you can enjoy your own light lunch. The rest of the day will be at your leisure. This evening, perhaps take the chance to witness Petra by night if your dates align. Seeing the Treasury plaza lit up by candlelight while Bedouin music plays is a truly memorable experience.

For another glimpse at Petra, rise very early for an unguided morning visit, if you wish. Afterwards, drive to the ancient Crusader castle at Shobak – originally built to protect the eastern flank of the Latin Kingdom and its trade routes to the sea before it fell to Saladin in 1189. Enjoy superb scenery and stop off at the viewpoint overlooking the Dana Nature Reserve before arriving in the late afternoon at your Dead Sea premium accommodation. Named for the lack of life in its waters, this lake is so intensely salty that the water density makes swimming and getting underneath the surface very difficult.

Enjoy a relaxing morning spent at the Dead Sea, perhaps heading back to the lake shores for a swim. The warm, highly saline waters make bobbing on the water's surface a unique experience. After lunch, leave the Dead Sea for Mount Nebo, considered to be where Moses saw the Promised Landed before he died. The modest church here with foundations dating back to the fourth century houses some of the best mosaics in Jordan. Continue to Madaba – or the City of Mosaics – and stop at St Georges Church, best known for its Byzantine mosaic depicting a map of the Holy Land. Head back to Amman and spend the evening here.

This morning, leave Amman for a short drive north to Jerash (approximately 1 hour) – once one of the grandest ancient Roman cities in the world. These are some of the best ruins Greco-Roman ruins around. Reaching its peak as a favourite of the emperor Hadrian, it has a striking collection of archways and theatres, baths, public buildings and colonnaded streets, and is a beautiful place to spend the morning exploring. Grand columns encircle the city's centrepiece of the Oval Plaza – an atmospheric place to linger after exploring Jerash's riches. Afterwards, return to Amman for the evening (approximately 1 hour). Perhaps spend your night at one of the many bars and restaurants in West Amman, or speak with your group leader about the traditional cafes dotted around the city where locals spend their evenings.

Your trip will come to an end today after breakfast. Check-out time is usually around 12 pm (midday), and so you are free to leave at any time. If you have arranged a private airport transfer, you will be advised of the pick-up time. If you would like to spend more time in Amman, we’ll be happy to organise additional accommodation (subject to availability). 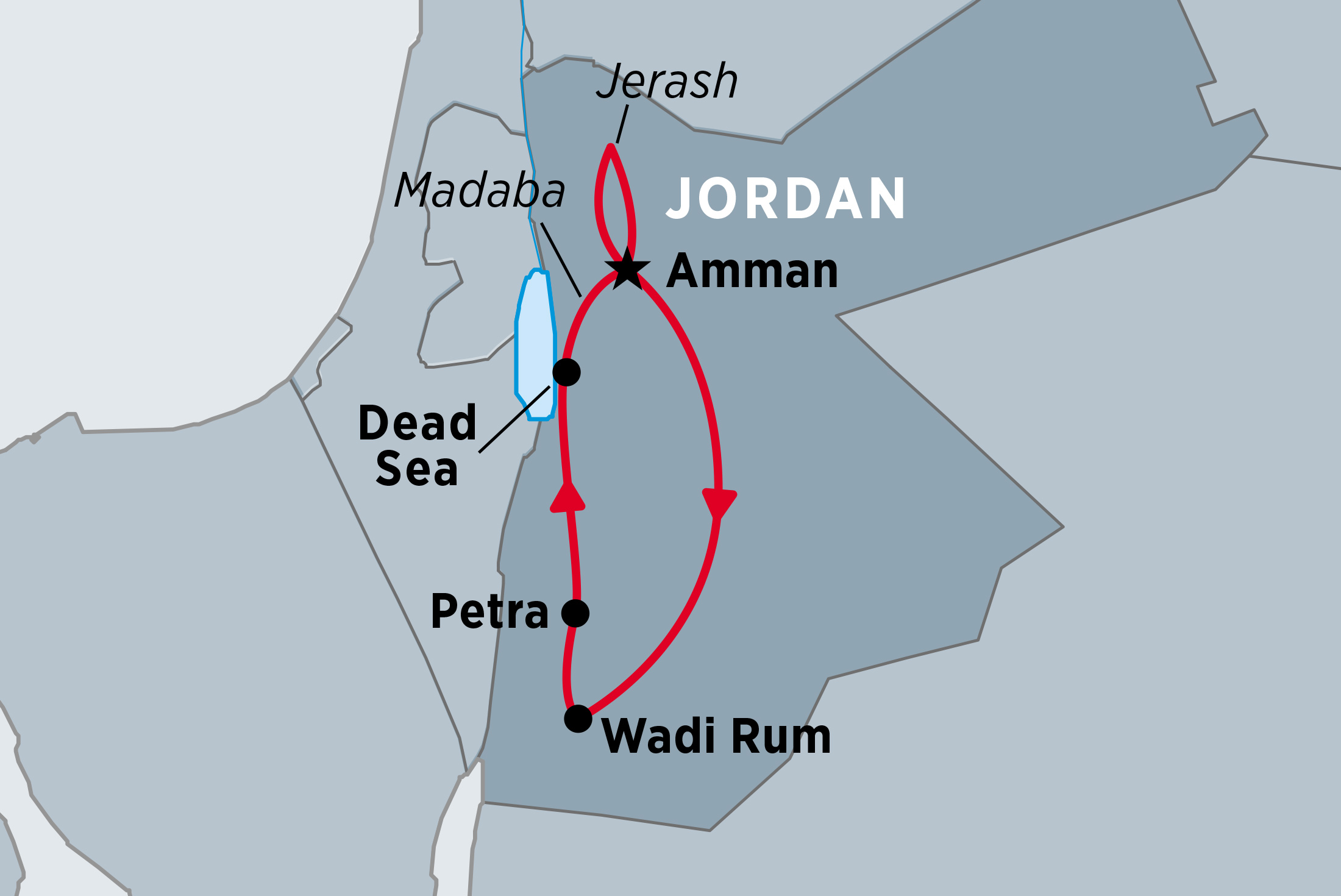