Discover the man-made beauty that lies across the north of India, from Jaipur’s ‘Palace of the Winds’ and Royal City Palace to Agra’s Red Fort and famous Taj Mahal. A trip to India wouldn’t be complete without a Bollywood film. Sit back and enjoy one in one of Jaipur’s magnificent cinemas. Embark on a safari through Ranthambore National Park in search of antelope, sloth bears, leopards and tigers. Immerse yourself in the grandeur of Rajput royalty during your India feature stay in rural Rajasthan at Castle Kanota

Experience India’s Golden Triangle and Nepal’s magnificent mountain peaks on this adventure from New Delhi to Kathmandu. Discover the ‘Pink City’ of Jaipur, witness the Mughal splendours of Delhi and Agra, safari through Ranthambhore National Park in search of tigers, and soak up the ambience of holy Varanasi. Continue to Kathmandu, where a scenic Everest flight provides an unforgettable introduction to Nepal. Cruise across Fewa Lake, explore the rural beauty around Tansen, find spirituality in Lumbini, and search for big game in Chitwan National Park. Awash with highlights, from lavish palaces and vibrant bazaars to small villages nestled in the foothills of snow-capped peaks, this is an eclectic adventure not to be missed. 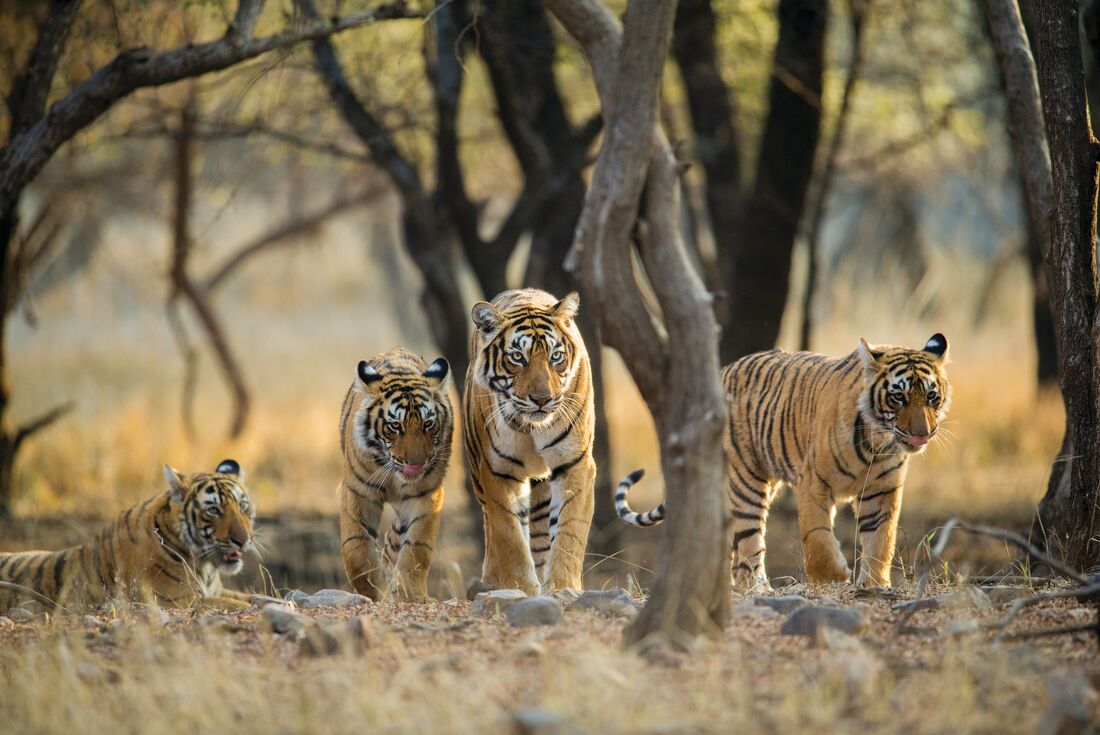 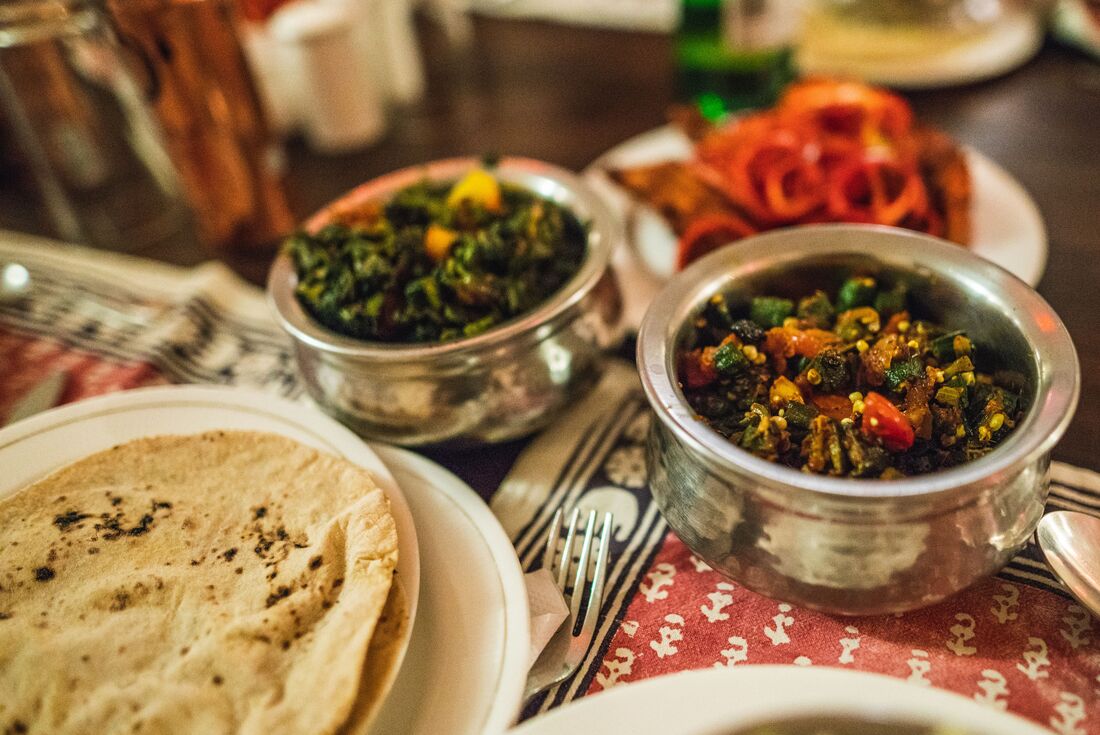 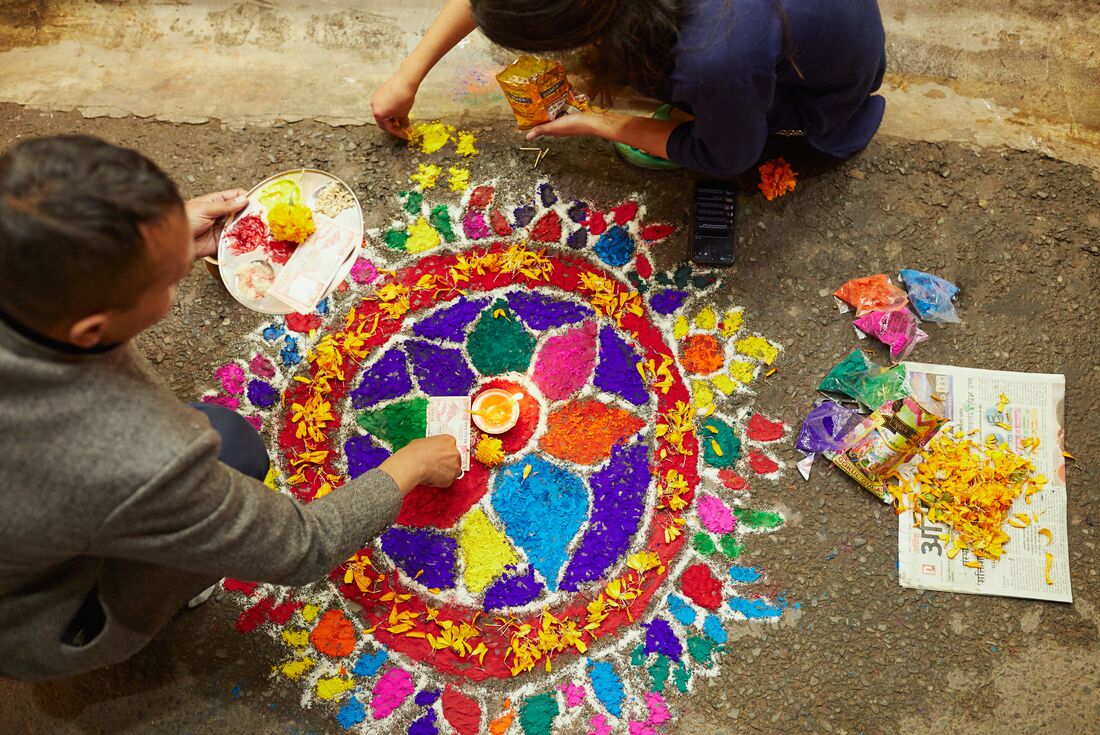 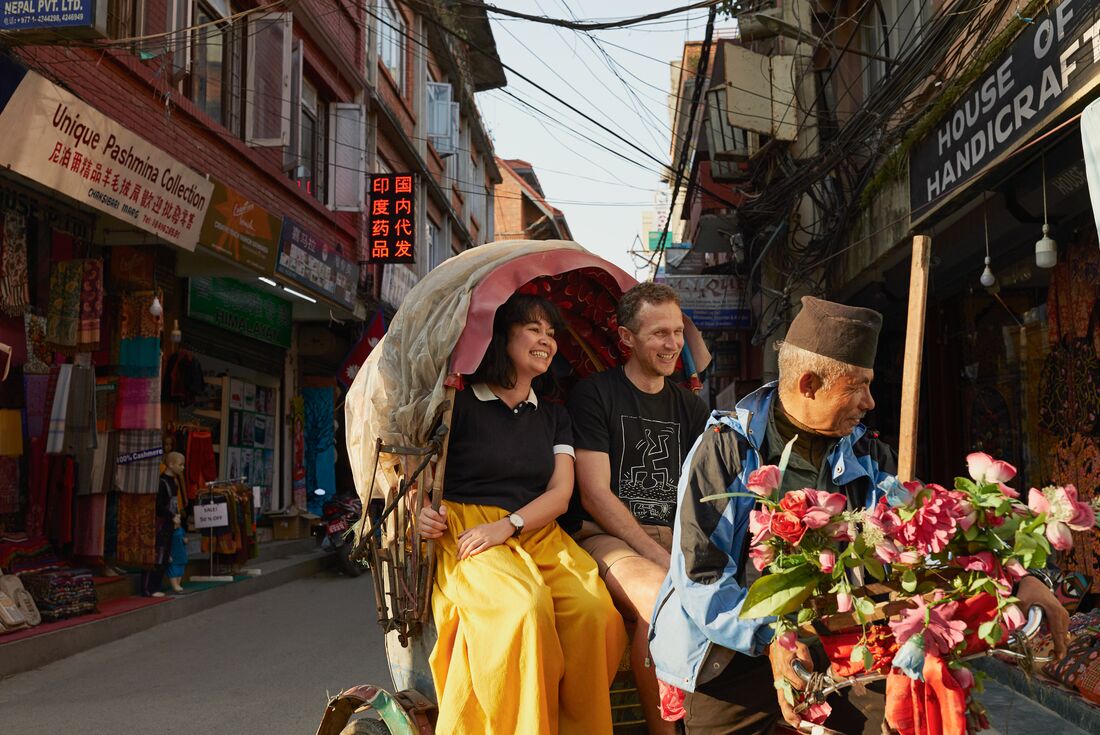 Welcome to India! On arrival at Delhi Airport, you will be met by a Peregrine representative and transferred to your hotel. This evening, there will be an important welcome meeting in the hotel at around 6 pm to meet your local leader and fellow group of travellers. Until then, you can use any free time before the meeting to explore this excitingly chaotic capital city. Filled with historical sites from different eras, museums, galleries and endless bazaars, there’s plenty to see in Delhi.

Get a taste of Indian rail travel with an express train into Rajasthan and onto the region’s capital of Jaipur (approximately 5 hours). On arrival, take a walking tour through the crowded streets packed with cars, camel carts, rickshaws, trucks and bicycles, past traditionally dressed Rajput men wearing colourful turbans and sporting magnificent moustaches. Walk the city's crowded bazaars filled with handcrafted textiles, folk art, and the local speciality of semi-precious stones. Afterwards, stop at one of India's most photographed buildings – the Hawa Mahal or 'Palace of the Winds'. There’s also the option to visit one of India’s finest palaces – Jaipur's Royal City Palace – or the astronomical instrument sculptures of the Observatory. This evening, continue to indulge in the wonders of Indian culture by watching a Bollywood blockbuster at Raj Mandir cinema.

Visit the opulent Amber Fort – the jewel of Jaipur. It is quite a sight, with its soft shades of red, sandstone and white marble with elaborate Hindu-style flourishes. Explore the legacy of a fallen empire in its ornate rooms, lavish murals, frescoed arches and delicate jali work. After spending some time here, the remainder of the day is free for you to explore parts of Jaipur that you may have missed yesterday, or simply to relax at your accommodation.

Drifting high over the Pink City while it’s bathed in the early morning sunlight is a highlight for many visitors to Jaipur, so consider booking yourself into a hot air balloon experience this morning. This can be done between September and April – for additional information see the 'Important Notes' section of the Essential Trip Information. During the day you’ll also drive to Kanota (approximately 1 hour). Your accommodation here is the elegant Castle Kanota – a Feature Stay of this itinerary. Built in 1972 and set on eight acres of manicured gardens, this heritage hotel is one of Rajasthan's finest.

Drive from Castle Kanota to Ranthambhore National Park (approximately 5 hours). In the evening, embark on a safari through the park. Ranthambore National Park is one of the original Project Tiger reserves – a place where nature has reclaimed ancient fortresses and temples and is teeming with wildlife. In 4WD safari vehicles, take game drives to search for animals, including the majestic tiger which stalks through the jungle. You may also have the chance to explore the 1000-year-old Ranthambore Fort, where two pavilions that have survived the ravages of war and time – Badal Mahal and Hammirs Court – give an idea of its old grandeur.

Rise early for a morning safari – your second chance to spot some of this region’s resident tiger population. Even if they are too stealthy to see, the park is filled with other animals like gazelle, hyenas, sloth bears, crocodiles, jackals, three types of antelope (nilgai, sambar and chital) and leopards to watch out for. Afterwards, enjoy some time at leisure at the resort. You may like to take a stroll around town with your free afternoon or continue your relaxation beside the pool, perhaps enjoying a meal at the onsite restaurant, with most of the produce grown at the resort’s organic farm.

Today, drive to Agra (approximately 5 hours). Once arrived, visit India's most iconic structure – the spectacular Taj Mahal. Best known as a monument to love and loss, the 17th-century Taj was built by Emperor Shah Jahan as a tomb for his second wife and is a beautiful example of Mughal architecture surrounded by trimmed English gardens. Agra is also home to one of the finest looking forts in India. Stop at the nearby Agra Fort – a fortress, palace and prison built of red sandstone by Akbar in 1565 and partially converted into a palace during the time of Shah Jahan.

Travel from Agra to Delhi and explore the bustling city streets on a walking tour. You’ll also get the chance to travel in the local style, by cycle rickshaw, gaining another perspective on this chaotic metropolis. Visit the Sisganj Gurudwara – one of the nine historic gurdwaras (Sikh temples) in Delhi, first constructed in 1783. Stop in at the awe-inspiring Red Fort, which is considered to be the peak of Mughal creativity. Also, pay a visit to the 73-metre-high Qutab Minar and about learn some of its history.

Fly from Delhi to Varanasi. Awash with shrines and temples, it is the ultimate destination for Hindu pilgrims who travel from far and wide to experience this spiritual city. Varanasi may not be known for its cleanliness, but it is recognised as one of India’s most inspiring cities. Take a walking tour of the Old City, through narrow laneways packed with stalls and shops, past the dhobi wallahs, burning ghats, and the endless temples that echo with bells and the pungent aroma of incense. Witness pilgrims performing ancient bathing rituals and ceremonies as the sun sets over this sacred city.

Today starts early with a sunrise boat ride on the Ganges, where you can watch the light gradually illuminate the many ghats and temples along the river as you pass. There is an option today to take a trip to nearby Sarnath – one of the four main Buddhist pilgrimage destinations. The site is where Buddha preached his message of the path to enlightenment and features a number of stupas and museums to explore. Alternatively, the day can be spent exploring the laneways and alleys behind the ghats or picking up some quality pieces from a local silk merchant. Perhaps finish the day with an optional Ganges river cruise at sunset.

This morning will be free for you to soak up the atmosphere of Varanasi. Perhaps hit the streets to do some last-minute shopping in the incredible bazaars or simply wander through the ghats. Later today, return to Delhi by plane (approximately 1.5 hours), arriving early afternoon. This evening, consider dining with your group with an optional dinner organised by your leader – a perfect occasion to celebrate the many memories made during your India adventure.

Return to the airport and fly to Kathmandu today. You will be met at the airport by a Peregrine representative who will transfer you to your hotel. There will be a group briefing with your new tour leader in the late afternoon. Usually the meeting is followed by an optional group dinner at one of Kathmandu's fine Nepali restaurants. 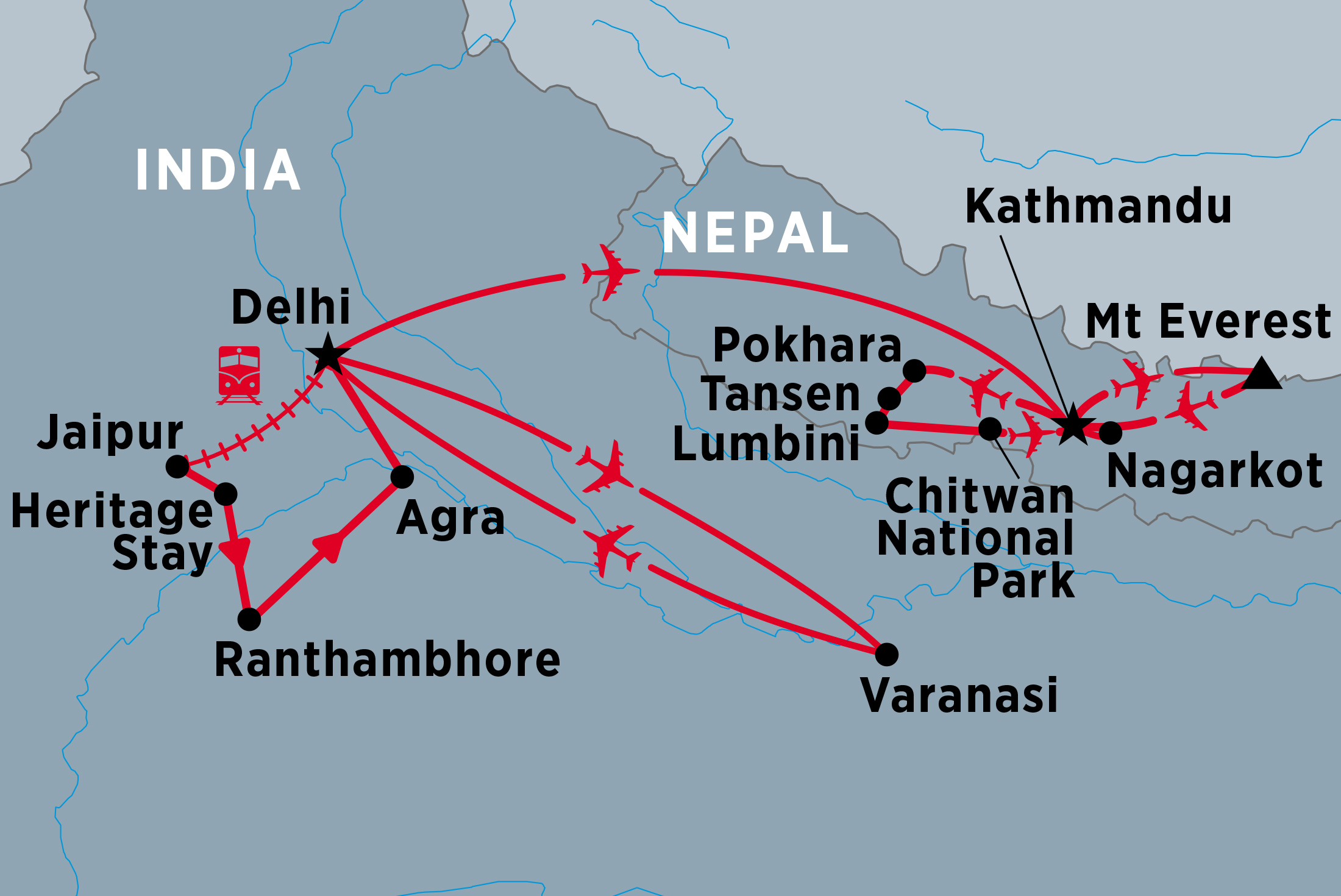