Enjoy an afternoon tour of Addis Ababa, including the National Museum, Holy Trinity Cathedral and the public square, plus a traditional Ethiopian dinner at a local project which helps local youth.. Sitting at 2,500 metres above sea level, Ben Ababa restaurant is a jumble of walkways, viewing platforms and firepits overlooking historic Lalibela.. Embark on a cruise around Lake Tana – Ethiopia’s wonderland of islands and monasteries – and sip a sundowner on deck at the day’s end.. Walk through the Simien Mountains National Park and up to Sankaber before retiring to your feature stay for the trip – the architecturally designed Limalimo Lodge.

Compared to what is found in Ethiopia, a more perfect combination of history, tradition, culture and nature couldn’t be created. Ethiopia is an incredible look back into history of the earth and humans. From 3 million-year-old fossilised hominid remains in Addis Ababa to incredible rock-hewn churches, hidden crypts and grottoes in Lalibela, this trip uncovers the 500-year-old monastery islands of Bahir Dar, the elegant castles and palatial complexes that stand guard over the city of Gondar, the majestic geological formations of the Simien mountains, the giant obelisks that rise of Axum, and even the rumoured home of the Ark of the Covenant. Concentrating primarily on the north of the country, take in views of the Blue Nile, trek to the peaks of the Simien Mountains (meeting red chested Gelada baboons), taste the famous coffee and delectable cuisine, and encounter the genuine and friendly people along the way. This is an adventure like no other.

NEW UPDATES FOR 2020
In 2020 this trip will be cancelled and replaced with the longer Experience Ethiopia, 14 day trip, which includes southern Ethiopia. Trip code PFLE. 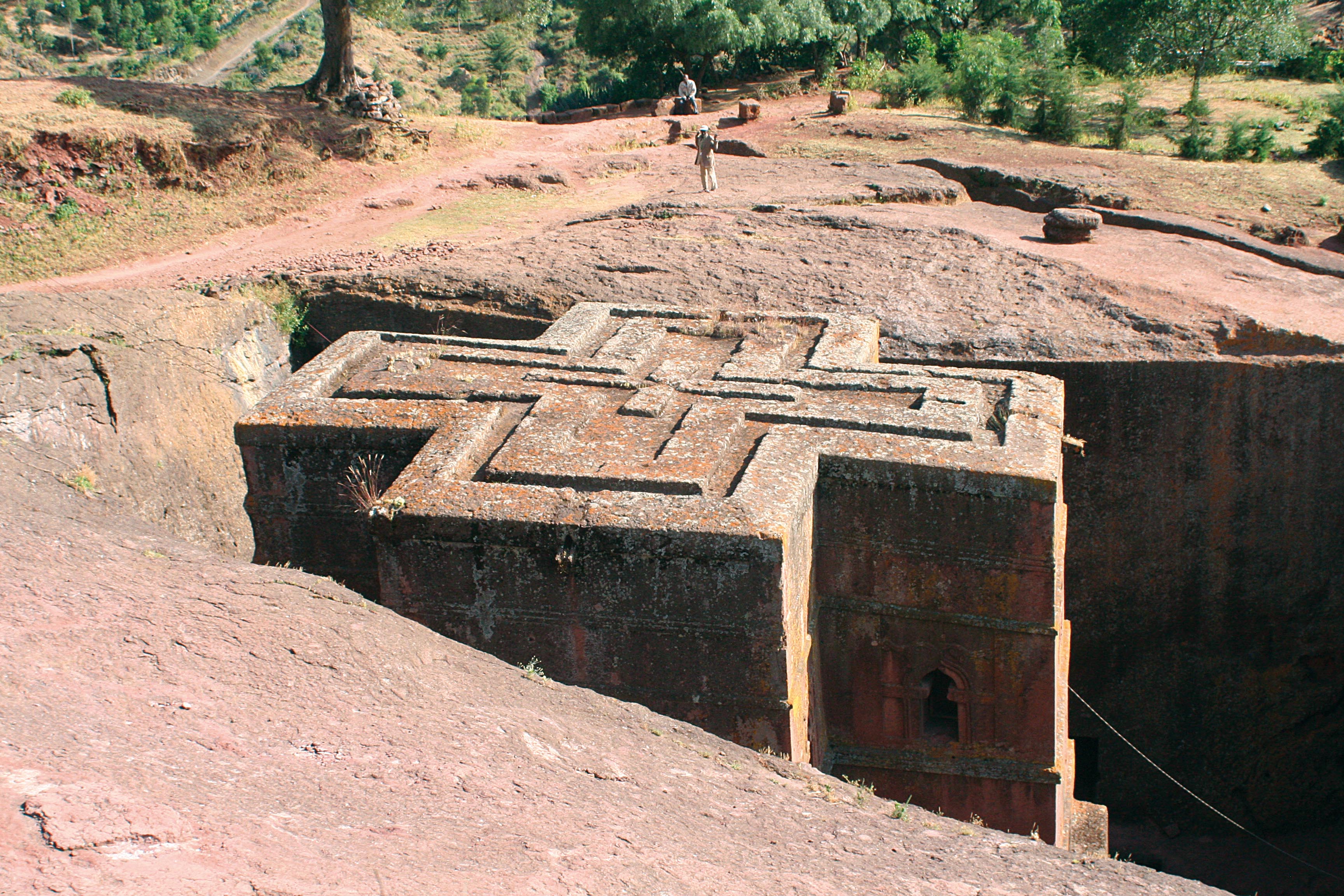 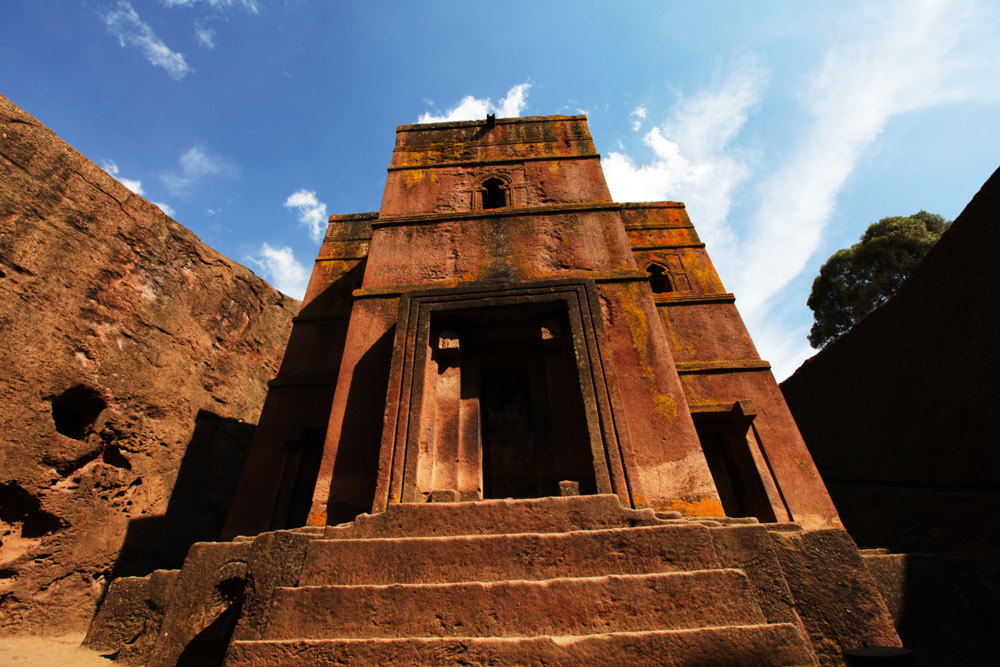 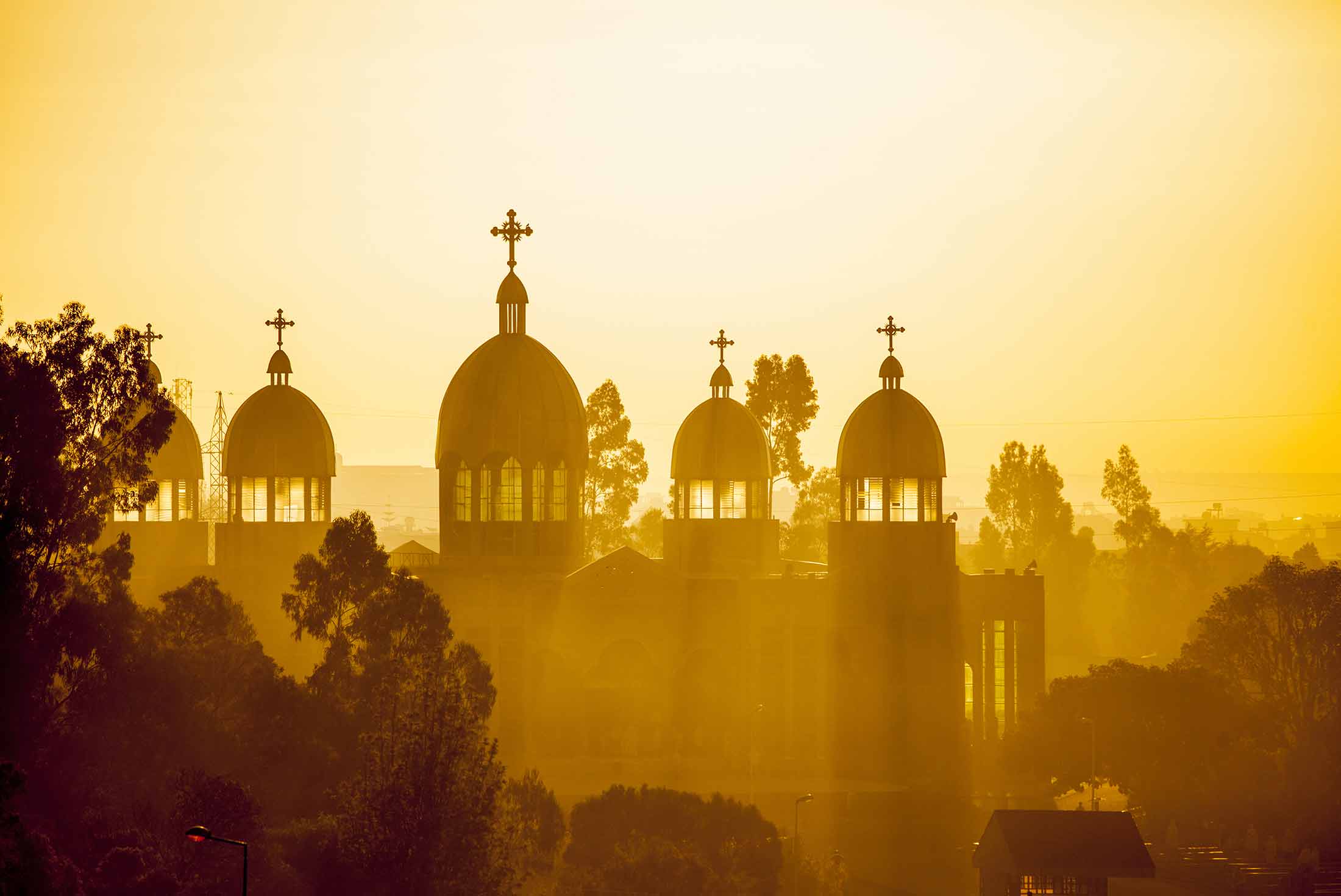 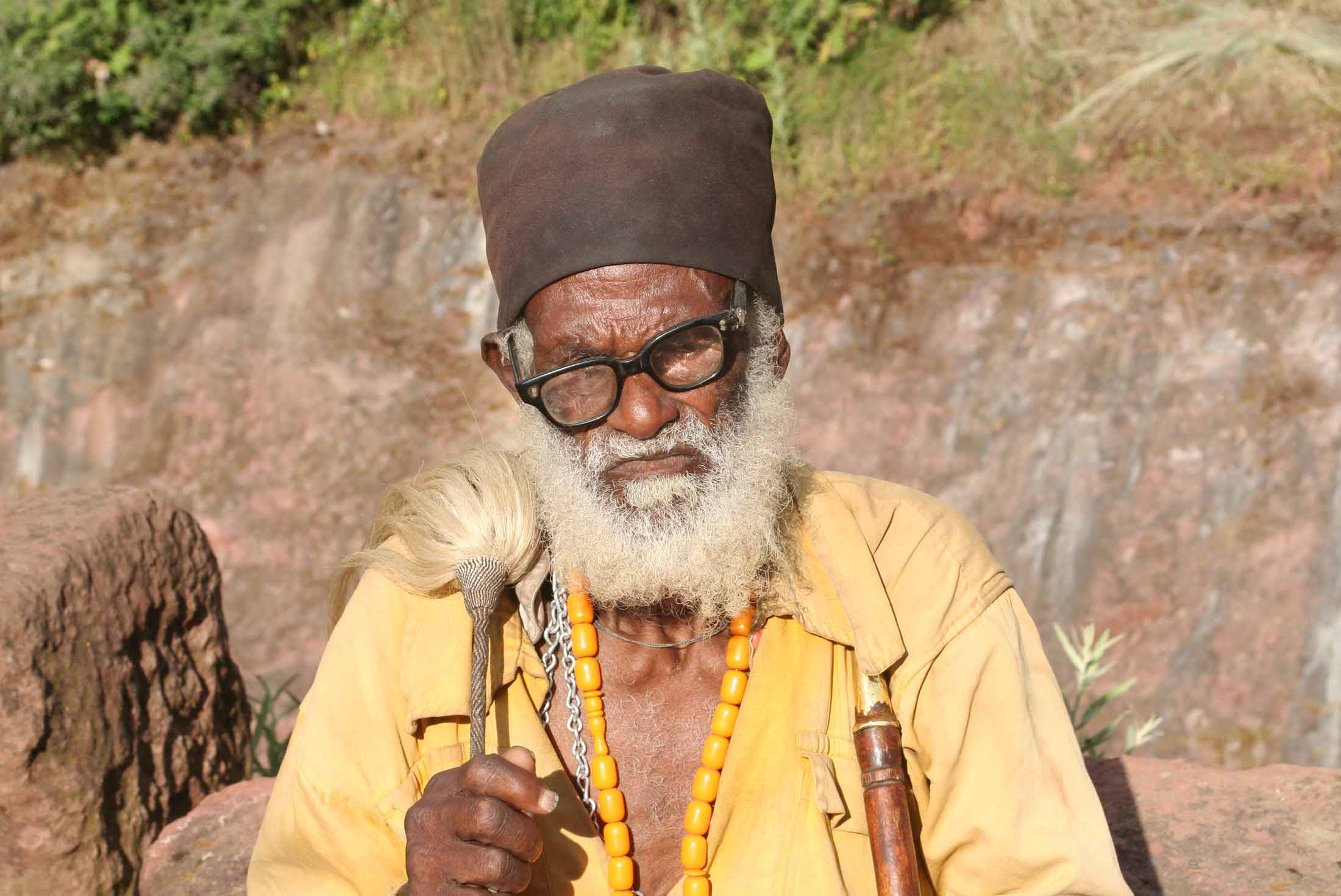 Begin this Ethiopian adventure in the capital of Addis Ababa with a welcome meeting at 1pm. Upon arrival you will be met and transferred to your Jupiter Hotel (approximately 30 minutes). In the afternoon you’ll take a tour of this bustling city, dotted with Italian architecture, interesting churches and friendly inhabitants. This relatively new city, established by the Emperor Menelik II in 1887, is one of contrasts – the Addis Sheraton, with its ‘singing fountain’, is one of the most luxurious in all of Africa, yet you only need to travel a few streets away to find yourself among busy markets, dirt roads and the odd goat or two wandering the street. Although Ethiopia was the only African nation never to be colonised, the Italians briefly occupied parts of it, including Addis, in the twentieth century. In many parts of the city the Italian’s legacy lives on in the form of old art deco buildings and coffee shops, particularly in the area known as the Piazza. Addis can seem daunting at times, but even the briefest foray into the busy streets can reveal interesting new insights. Your tour will include the National Museum, Holy Trinity Cathedral and drive around the main public squares of the capital. The museum contains the remains of the fossilized hominids “Lucy”, a female hominoid that lived some 3.2 million years ago and who is a key discovery on the origin of early mankind. The cathedral houses impressive stained- glass windows and beautifully carved imperial thrones, and is also the final resting place for Emperor Haile Selassie and his family. In the evening you'll have dinner at a local restaurant.

This morning you will be met and transferred to the airport for a short flight to Bahir Dar, one of the most attractive towns in northern Ethiopia. Drive the short distance to your hotel, lying on the shores of the lush setting of Lake Tana. This afternoon, board a sightseeing boat for a cruise around the lake. Covering over 3,500 square kilometres, this is Ethiopia’s largest lake and is home to 37 islands, 20 of which house some of Ethiopia’s most venerated monasteries. Many of these monasteries are believed to date back to the 13th and 14th centuries, and feature superb ecclesiastical art. Legend has it that the Ark of Covenant was hidden here for protection during the times when Muslim forces invaded from the east. Your boat trip will take you to the monastery of URA-Kidane Mehret, which dates from between the 16th and 18th centuries. It is renowned for its collection of crosses and crowns, and its incredible painted walls that offer up a virtual 'who’s who' of Ethiopian saints. The boat returns to your hotel via the source of the ‘Blue’ section of the Nile. End the day with a sundowner drink on the boat as you float across Lake Tana.

After breakfast you will leave for the Blue Nile Falls. Located 32 kilometres south of Bahir Dar, the Blue Nile Falls measure over 400 metres wide and descends 48 metres in full flood. These falls are known locally as Tis Isat (Smoking Water) and are a spectacular sight when in full flood. New hydro-electrical plants and dams have somewhat impacted on their magnificence, but the sight is still a memorable one. You can take a longer scenic walk past the main viewpoint (1.5 kilometres) or a shorter walk to reach the foot of the falls. You will then cross the Nile River by boat to reach your vehicle. A leisurely afternoon is then spent in Bahir Dar. There’s will be the option of visiting the local market and taking in a panoramic view of Lake Tana and the Nile from a nearby viewpoint.

Travel north around the edge of Lake Tana this morning and head for the regal city of Gondar. This drive will take approximately 4.5 hours, including stops for photos along the way. Gondar was the 17th and 18th century capital of Ethiopia, and is famed for its medieval castles and churches. The city's unique Royal Enclosure is a World Heritage site, home to dramatic Emperor-built castles unlike any other in Africa. The architecture shows the richness of Axumite traditions as well as the prosperity of Ethiopia in those two centuries. Spend the afternoon visiting these medieval castles, and stop by the famous church of Debre Berhan Selassie. The church is one of the finest in Ethiopia, with walls and ceilings covered stunning in ancient murals. Later, if there is time, perhaps visit Project Ploughshare, which helps disadvantaged women rekindle the area’s once famous pottery craft.

Continue North in the morning, making a 3-hour drive into the Simien Mountains. Once you arrive in your National Park hilltop lodgings, the rest of the day is free for you to explore the beautiful surrounds. If you’d like, you can take a walk through the park that will last between one and three hours, or perhaps you’d prefer to attend a traditional coffee ceremony and learn to make spongy enjera (sour dough-risen fatbread). Either way, the wild and rugged landscape is captivating.

Today you will enjoy a scenic walk within the Simien Mountains National Park. The park is a majestic series of undulating amethyst peaks, including Ethiopia’s highest point – Ras Dejen. The peaks have been eroded over millions of years and have left strange and wonderful geological formations behind. The park is home to some of the world’s most elusive animals, and while you're here you might encounter troops of the endemic Gelada monkey. Found exclusively in Ethiopia, Gelada are often referred to as the ‘bleeding heart baboon’ or the 'lion monkey’ as their coat is shaggy and their chest has a marked ‘red heart’ patch. Gelada monkeys have no natural enemies, so they can be found in good numbers and are quite easy to approach. Enjoy a pack lunch and then take a scenic walk along a dramatic escarpment, before returning to the lodge in the late afternoon.

Take the asphalt but winding road up to the fabled city of Axum, crossing the lowlands of the Simien Mountains and the Tekeze River gorge (approximately 4.5 hours). Though this is a long and winding journey, the spectacular views of the mountains makes the time slide away. You’ll arrive in Axum in the late afternoon. Axum was once the capital of Africa’s oldest empire – the Kingdom of Axum lasted from 1 AD to 700 AD and grew to rank among the most powerful kingdoms of the ancient world. It was positioned at the centre of an important trading route that stretched from Egypt to the Mediterranean Sea and all the way to India and Sri Lanka. Axumite society was rich, well organized and technically advanced. In this period, bronze, silver and gold coins were produced, amazing tombs and monoliths constructed and Christianity was introduced to Ethiopia.

Today you will tour the incredible historical sites of Axum. Visit the stele fields, several tombs, the ruins of the Queen of Sheba’s palace and an archaeological museum. The field is home to over 100 stele – the largest one measuring 33 metres and weighing an incredible 517 tones. Stele (or monoliths) are carved from a single piece of granite, and are often elaborately decorated to resemble a multi-story house complete with windows, doors, locks and structural beams. Their scale reflects Axum’s once great importance, and they were probably transported by elephants from a nearby quarry. The mausoleums in this area include the tomb of the false door and also the tombs of King Kaleb and Gebre Meskel, while the archaeological museum gives you further insights into this incredible society. An unimposing building with a green picket fence is the St Mary of Zion Church, the first built in sub-Saharan Africa. This holds the crowns of various former Ethiopian emperors and is even said to house the most fabled biblical relic in history – the Ark of the Covenant.

Take an early morning flight from Axum to Lalibela (approximately 140 minutes), where you will stay for two nights. Despite the town of Lalibela being isolated in the Lasta Mountains at 2,630 metres above sea level, it is still the home of Ethiopia’s top sight, and one of the world's greatest historical and religious sites. Between 1137 and 1270, several astounding rock-hewn churches were constructed in Lalibela; astonishing because most are not built from carved freestanding rocks, but instead created from huge single blocks of stone unearthed by the digging of enormous pits. You will spend two afternoons exploring the extraordinary churches that look like they've been dropped down from the sky. The Northern Group contains seven churches, a tomb, a chapel and a sunken chapel. At the centre of the group is Bet Medhane Alem, measuring 33.5 metres by 23.5 metres and said to be the largest rock-hewn church in the world. A tunnel connects three of the churches in a courtyard to the east, whilst another tunnel connects two other churches to the west of Bet Medhane Alem. However it is Bet Giyorgis (St George's), carved in the form of a Greek cross and lying slightly apart from the main northern cluster, which is the most famous and frequently photographed. This church is exceptionally well-preserved and is probably the most visually perfect. The Eastern group of five churches includes the only hypogeous church, where only the roof remains attached to the overhead rock.

This morning there is an option to trek to the rock church of Asheten Mariam, which sits atop the 3,150-metre-high Abune Josef mountain that overlooks Lalibela. You will climb for 2.5 hours to the summit, where the church is carved out of a cleft into the cliff face. The monastery houses ancient parchments and crosses, but the real treasure is the setting and the view. You may see Ethiopian wolves and gelada baboons on your hike. Descend the mountain and return to the hotel for lunch. Depending on which church group you visited yesterday (North or East cluster), you will spend this afternoon exploring the other, absorbing the haunting atmosphere inside the churches, and taking plenty of photographs of the incredible architecture and the religious rituals within. This evening you will enjoy sundowner drinks and a special dinner at Ben Ababa restaurant. 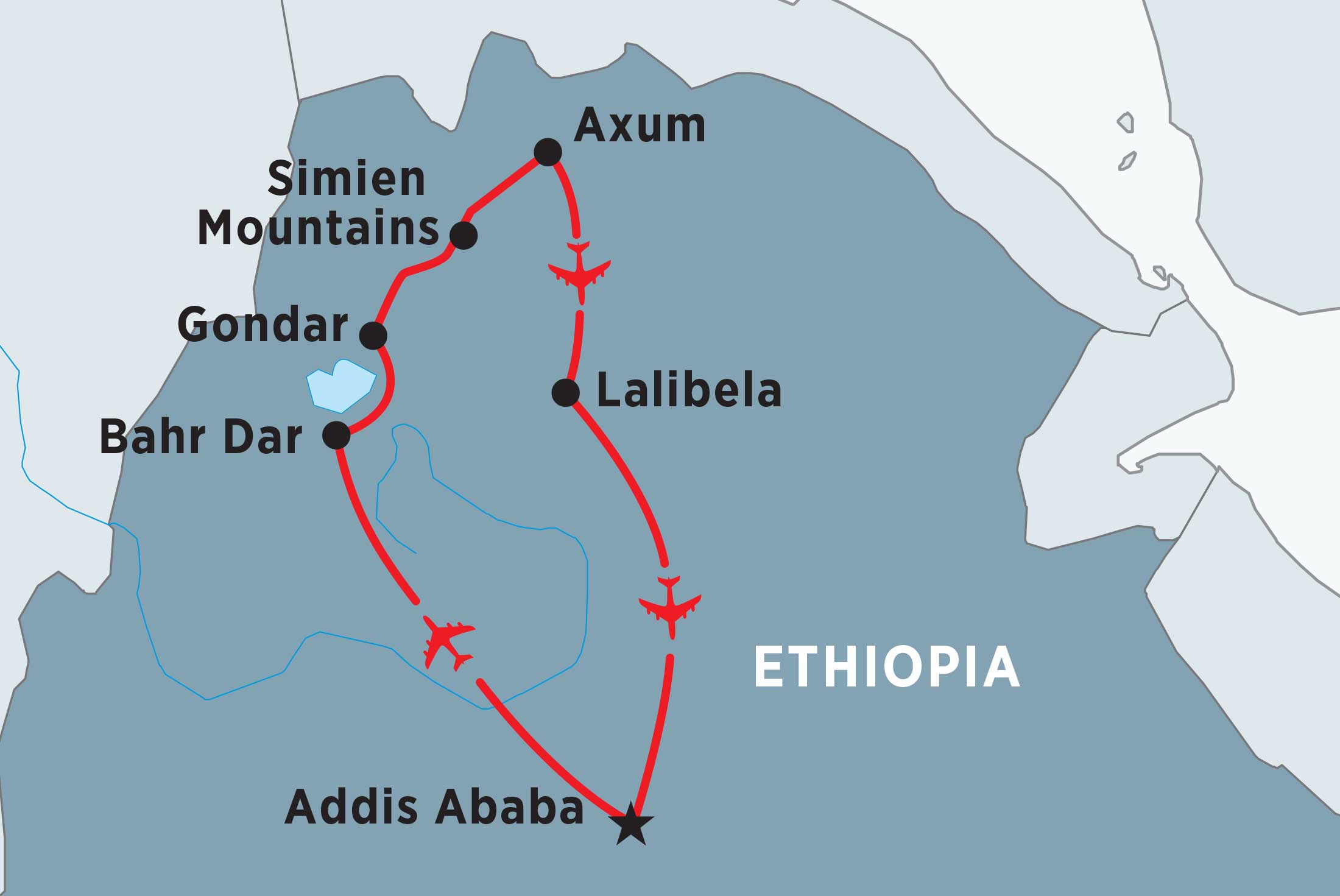