This adventure encompasses much of what makes Nepal so beloved by travellers. Whether you’re exploring the exotic capital of Kathmandu, discovering Pokhara, beneath awe-inspiring snow-capped peaks, or exploring the rural beauty around the hilltop village of Tansen, finding spirituality in Lumbini – the birth place of Buddha or exploring Chitwan National Park in search of big game. Undoubtedly the amazing flight to view Sagarmatha (Mount Everest) up-close will take your breath away. Nepal is incredible. You’ll be left with no doubt why so many return to the country time and time again.

Bhutan is perhaps the most mysterious and diverse of all the Himalayan kingdoms, where for centuries a traditional Buddhist culture has thrived in isolation from the rest of the world. It is a country that puts its people and environment first – a place where progress is measured in gross national happiness not GDP, and that’s not just carbon neutral, but carbon negative. It’s a place of lush forested valleys, fortified monasteries, sacred mountains, and art and architecture unique to the region. This journey begins in Paro and heads straight to Thimphu, where there are two days to discover the history and heritage of this charming and serene capital. Walk in the countryside and back in time with visits to the beautiful Punakha and Haa Valleys. Here the rural lifestyle and architecture of Bhutan is explored before returning to Paro. Finish with a true highlight – the spectacular Taktsang (the Tiger’s Nest), a small monastery clinging to a rocky cliff 900 metres above the valley floor. A journey through the astonishing beauty of the people, landscape and culture of Bhutan will have your happiness levels off the scale. 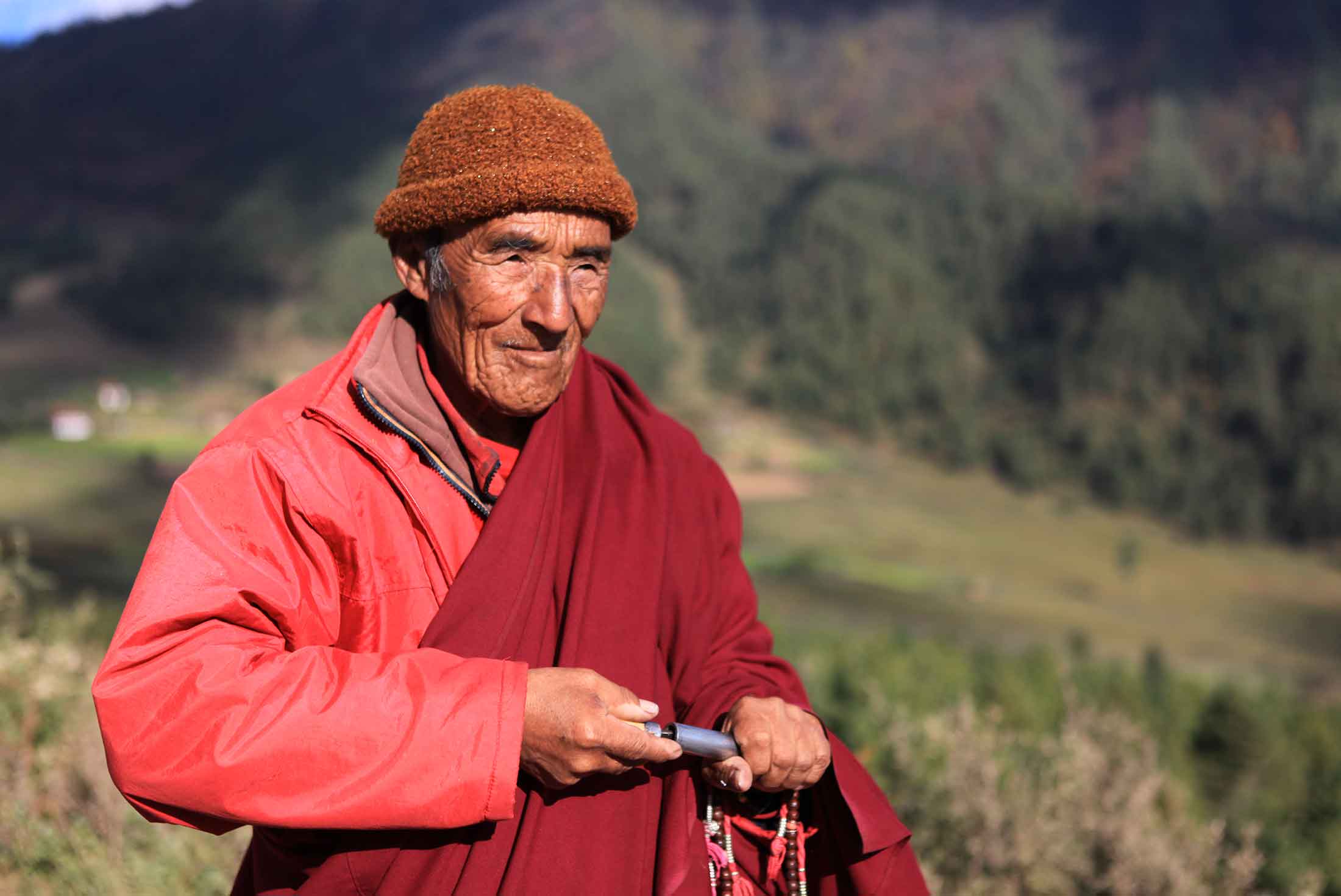 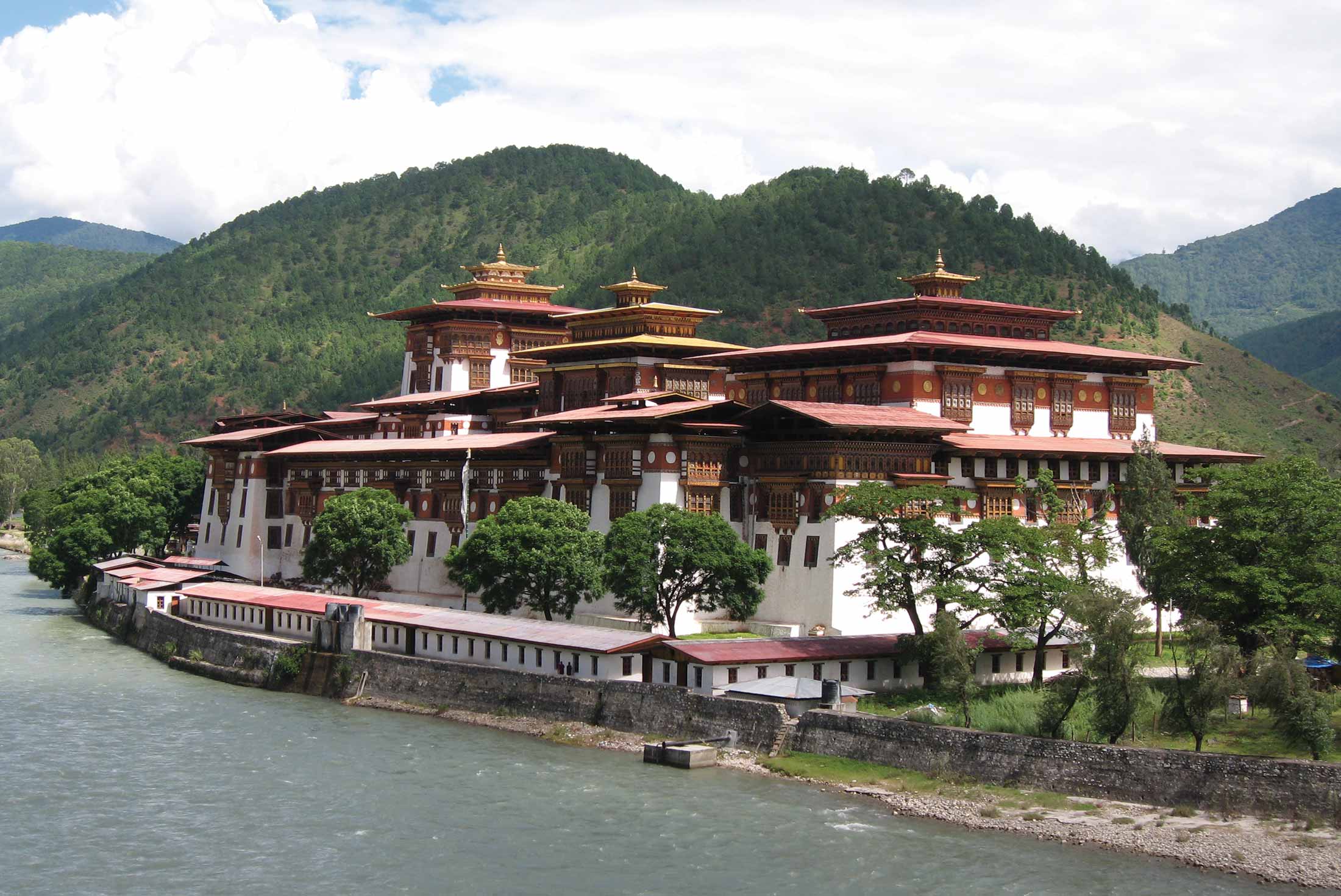 Welcome to Nepal! On arrival in Kathmandu you will be met at the airport by a Peregrine representative who will transfer you to your hotel. Join an important group meeting at 6 pm, followed by an optional group dinner at one of Kathmandu's fine Nepali restaurants.

In the early morning, you will make an attempt at the Mount Everest scenic flight. This amazing experience will take you over Sagamartha National Park, through a crescendo of the highest peaks in the world, climaxing by getting up close to Mount Everest. Later in the morning, explore Kathmandu on an organised sightseeing tour. You will visit Bodhnath Stupa, one of the biggest Buddhist shrines in the world, where you can observe Buddhist monks in prayer in the monasteries surrounding the stupa. You will also visit Pashupatinath, the most famous Hindu temple in the country, located on the banks of the holy Bagmati River. Here you will see Hindu holy men (sadhus) meditating, pilgrims bathing, and occasionally funeral pyres burning on the ghats. The rest of your afternoon in Kathmandu is free for further sightseeing and exploration.

Travel to Nagarkot in a private vehicle. On the 3-hour journey, there are two stops at UNESCO World Heritage Sites along the way, starting with Bhaktapur. Bhaktapur is revered as one of the world’s few well preserved ancient cities, playing host to a wondrous range of exotically designed temples and statues. Then wander to the ancient temple of Changu Narayan, erected in dedication to the Lord Vishnu and site of numerous legends. Upon arrival to Nagarkot, prepare for an overnight stay at Club Himalaya, renowned for its unrestricted view of Kathmandu, Bhaktapur, Changu Narayan and the surrounding areas.

Wake up and witness an early morning 180-degree sunrise view before travelling to Kathmandu airport by chartered coach. From here, you will fly to Pokhara with an estimated flight time of 30 minutes – if you’re lucky you might catch a glimpse of the spectacular Himalayan mountain chain to the north. On arrival, take a boat ride across the lake of Phewa Tal, the second largest lake in Nepal. The visit to the Peace Pagoda afterwards grants excellent views of the mountains including the Annapurnas, the famous fishtail peak of Machhapuchhare and a glimpse back across to Pokhara. Next comes a visit to the International Mountain Museum, which is full of fascinating tales and exploits from climbing expeditions of the past – some ending in triumph and others in tragedy. After this, you have the day free to explore peaceful Pohkara and its surrounds.

Enjoy a free day for further exploration of the peaceful surroundings of Pokhara. Your group leader can advise you of sightseeing opportunities – maybe take a boat for a row out on the lake, explore the Hindu temple or Buddhist monastery, or simply pick up some souvenirs and relax in your hotel.

Travel by private vehicle to Tansen on a 5-hour drive. Formerly known as the capital of the Magar kingdom Tanahun, Tansen is now known as the home of the United Mission Hospital, a partnership between 20 Christian organisations and Nepal that sees over 100,000 patients per year. During your stay, visit Tansen town, the palace museum, a dhaka topi (traditional hat) and brass bottle workshop and experience an interaction with the locals.

An optional hike to the Rani Mahal is available today. Rani Mahal translates to ‘Queens Palace’, as the site was built as a monument of love to the deceased youngest wife of former general Khadga Samsher Rana, Tej Kumari Devi. Your other option is to travel to Tansen Hill station where panoramic views of Annapurna and Tansen valley can be seen, and Tansen town lies nearby should you wish to continue exploring it. Later this afternoon drive to Lumbini, the birthplace of Buddha.

This morning head out of Lumbini to Tilaurakot, which houses the ruins of ancient Kapilvastu – the capital of the Sakya kingdom and where Buddha spent his youth as Prince Siddhartha. Also, explore Nighlihawa and Gotihawa, which are closeby to Tilaurakot and have broken Ashoka pillars and other relics. Enjoy lunch and then return to Lumbini in the afternoon. There’s also the option to explore Lumbini’s UNESCO World Heritage Site. Lumbini is known as the holiest place of one of the world’s great religions and the area contains important evidence about the nature of Buddhist pilgrimage centres from as early as third century BC. Discover the serenity of the Maya Devi Temple, the statue of Little Buddha, and the Bodhi Tree, which is very close by your accommodation.

After breakfast, prepare to be picked up and driven to Chitwan National Park (approximately 4 hours). After arriving and settling in, meet the camp staff and resident naturalists who will discuss the park’s habitat conservation program. There’s some flexibility with activities in this area, which may vary depending on the time of year and known wildlife movements and locations. A late afternoon safari is an experience like none other, showing the varied and exciting flora and fauna of the park. Enjoy dinner with your group and relax at your accommodation’s bar while discussing the day’s sightings or listening to the song of the jungle.

After breakfast, leave the lodge for an early morning trip to begin a dugout canoe adventure on the Rapti River. This exhilarating ride offers chances to spot marsh mugger crocodiles along with the various birds that inhabit the riverbanks. Tiger sightings are rare these days, but the magnificent creatures inhabit the park so it’s not to be ruled out. Upon your return to dry land, an organised program will help fill the rest of the day and may include further excursions by jeep or a visit to one of the nearby villages.

Drive to Chitwan Airport on a 1-hour drive before flying back to Kathmandu. The afternoon is yours to enjoy, so perhaps engage in some shopping or just relax at your hotel. A farewell dinner will be held at the Utsav Restaurant, featuring an authentic night of local cultural food and dance.

Leave Nepal behind today with a transfer to the airport and a flight to Bhutan. Depending on the clarity of the weather and your flight path into Paro (2,280m), you may be met with an awe-inspiring view of the massive eastern Himalayan peaks on your way in, including Kanchenjunga (the world's third highest peak) and Chomolhari (Bhutan's holy mountain). Please note that you will be unescorted on this flight, but you will be met at Paro airport and transferred to Thimphu (2,736m), the capital of Bhutan (65 km, approximately 75 minutes). The snaking road to Thimphu follows the Pa Chu as it winds downstream to its confluence with the Wang Chu, then up the valley to Thimphu. After settling in, there will be a briefing given by the tour leader in the late afternoon, a great opportunity to meet any new travellers joining you on the next stage of your adventure. Thimphu is a compact town that occupies both sides of the Thimphu Valley, bisected in the middle by the Thimphu Chu River. Time permitting, you will visit the King Jigme Dorji Memorial Chorten (built in 1974 in memory of King Jigme Dorji Wangchuk), and take an orientation walk along the main street. If there is not enough time today, you will do this tomorrow. 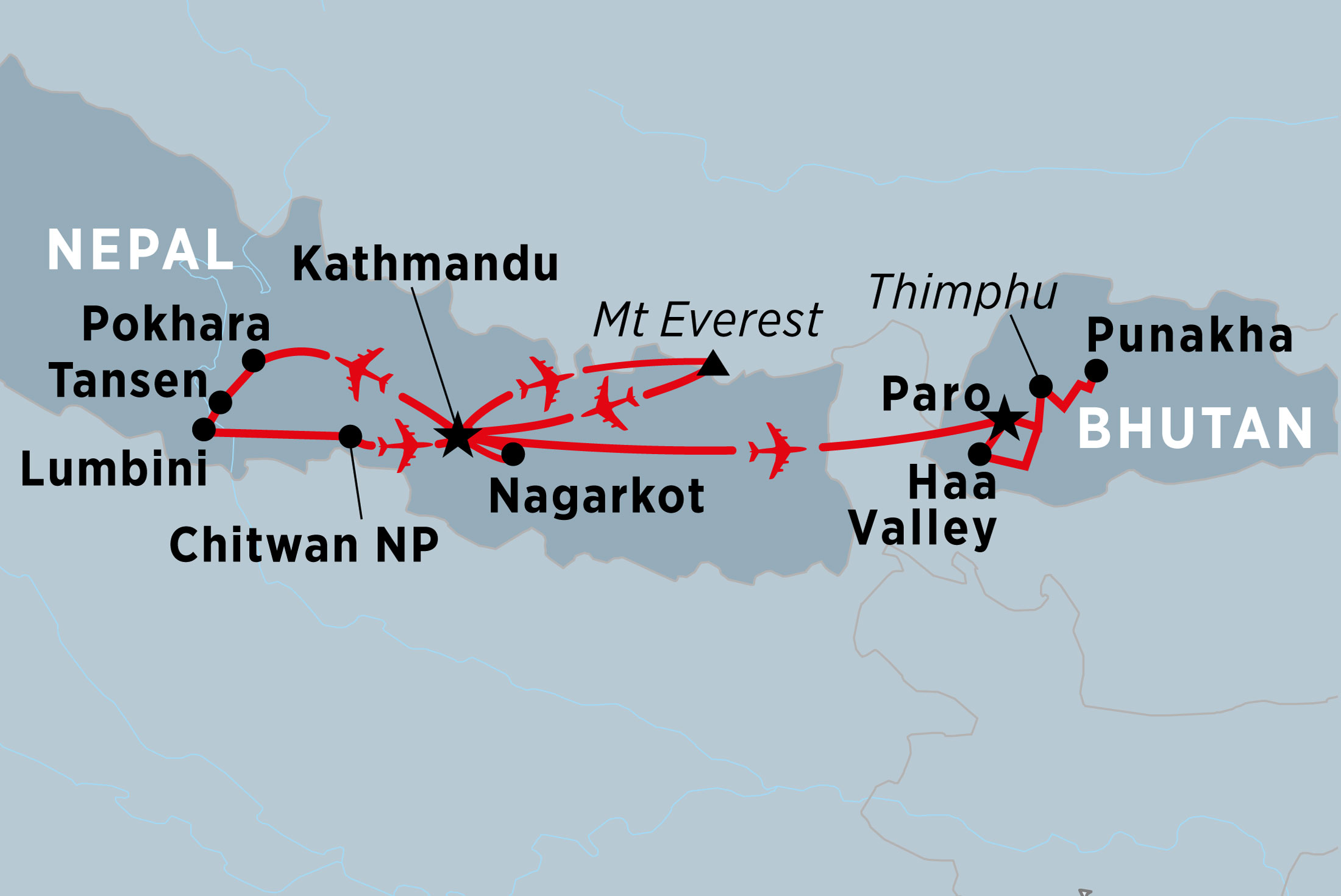