Egypt and Jordan in Depth

Egypt and Jordan in Depth

Take your time exploring Abu Simbel with an overnight stay, discovering this magnificent monument carved out of the mountainside at both day and night.. Relax with four nights on a premium Nile riverboat, cruising slowly down the river past ancient temples, and gazing from the terrace bar and restaurant to local life unfolding on the riverbank.. Discover traditional Nubian customs and lifestyle at a dinner experience on Elephantine Island, and in Cairo, enjoy an authentic meal in a local Egyptian family home.. Journey through the desert to a premium Bedouin camp on a 4WD adventure and get to know the customs and cultures of this community spending the night under a starry sky.

Discover the modern and ancient marvels of Egypt and Jordan on this 22-day journey to two of the Middle East’s most fascinating countries. Beginning in Cairo, pass by the magnificent Pyramids of Giza, take a four-day cruise down the legendary Nile and learn about the battles fought in El Alamein. Fly to Jordan and discover the unique culture of the Bedouin in Wadi Rum, float in the salty Dead Sea and stand in awe in front of the elaborate Treasury of Petra. With premium accommodation, local leaders and a relaxed pace all as standard, you’ll be enjoying these masterpieces in all their prized glory. 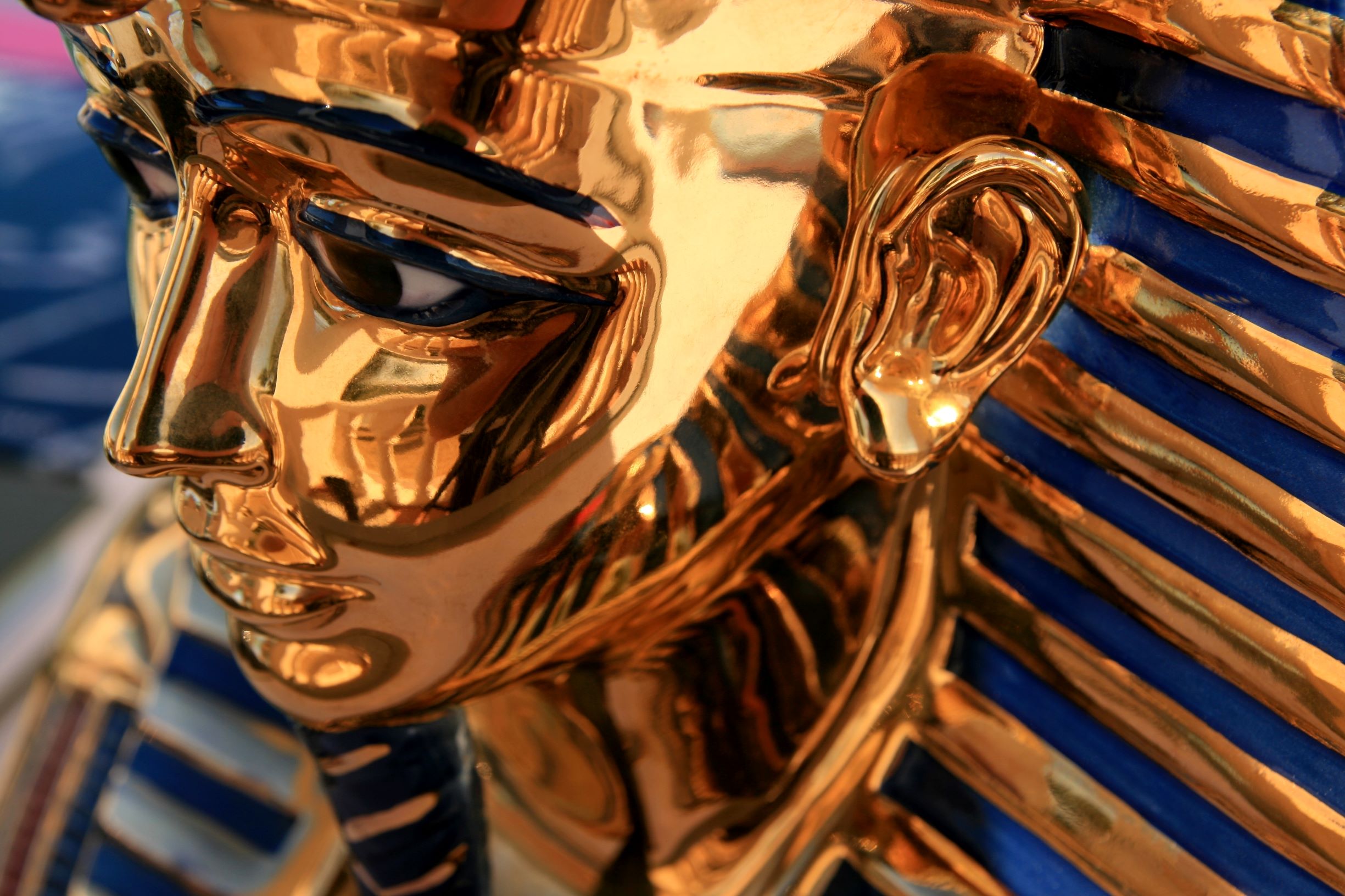 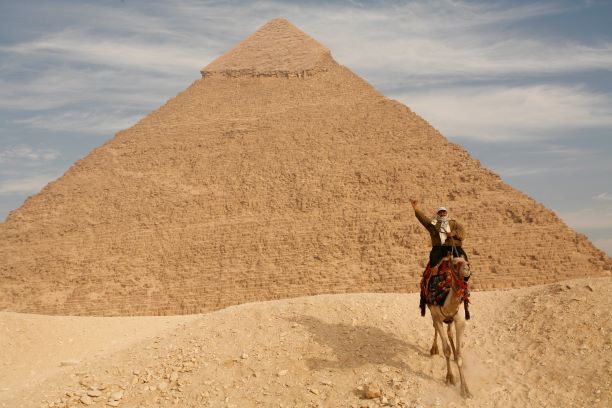 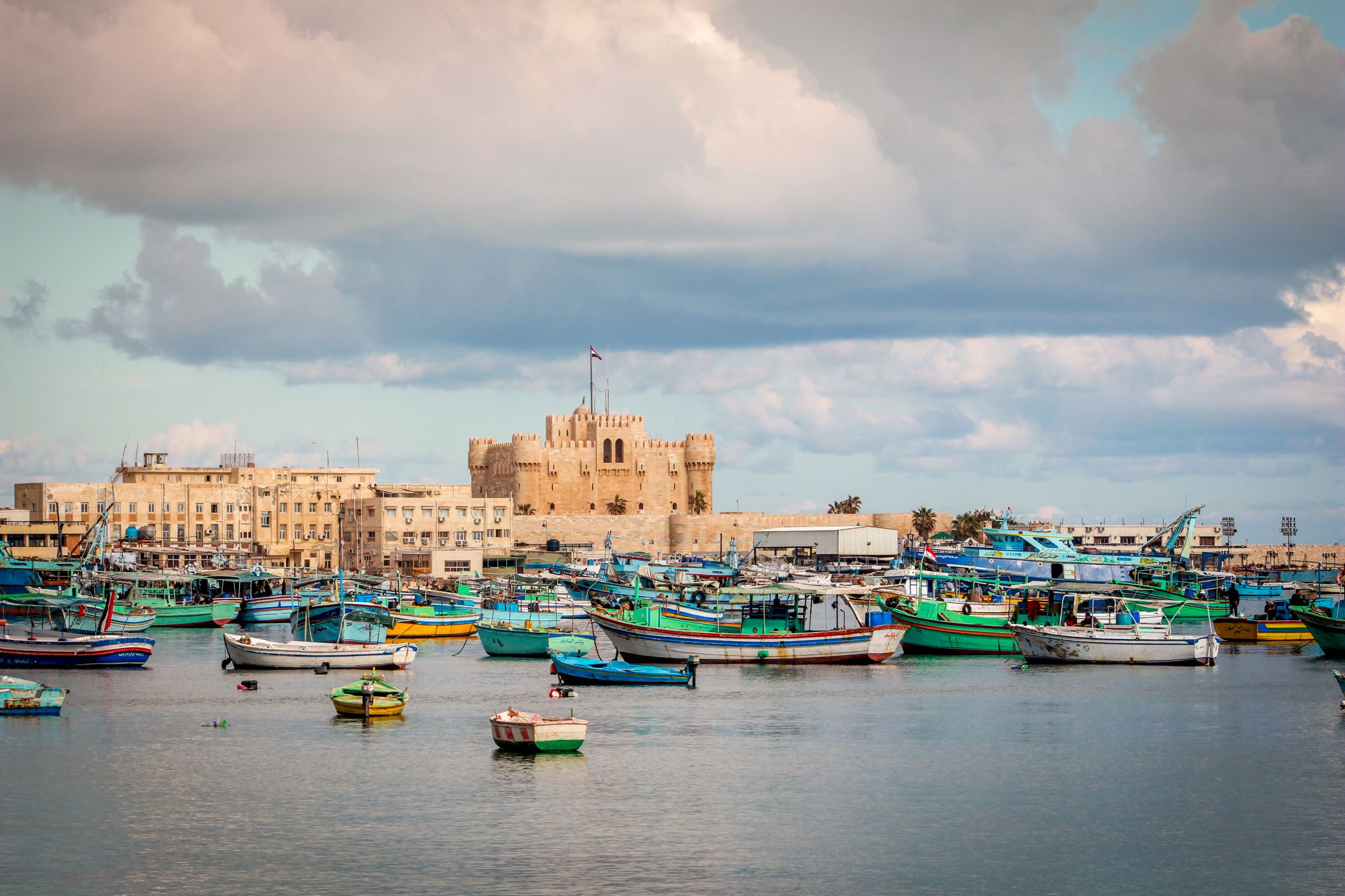 Welcome to Egypt! You’ll be met at Cairo International Airport by a Peregrine representative and transferred to your hotel. You’re welcome to arrive at any time, but please note that there’s an important meeting at 6 pm with your local leader and fellow travellers. If you do happen to arrive early, there’s plenty to hold your attention in this chaotic city of contrasts. Perhaps take a stroll around the markets or, if there’s time, jump in a traditional felucca for a sail down the Nile.

This morning after breakfast, travel to arguably the most recognisable structures in the world – the Great Pyramids of Giza and the Sphinx. These incredible feats of engineering are captivating when seen up close. For an additional charge, you may be able to step inside the Great Pyramid of Khufu (or Cheops). After spending some time here and eating lunch, continue to the Egyptian Museum where an expert guide will talk you through Egypt’s rich history. Have some free time to explore on your own, perhaps opting to purchase a pass to visit the Royal Mummy Room. As you return to your accommodation, enjoy the premium facilities on offer including the large outdoor pool overlooking the pyramids or multiple onsite eateries. Instead, you may like to take a taxi into town to explore Cairo further, or for something special, book in for a dinner cruise on the Nile.

Take to the road for your journey to Alexandria after breakfast, stopping in Wadi El Natrun after approximately 100 kilometres. This area became a sanctuary for Christians after Saint Macarius the Great retreated here in AD360, and there were once some 60-odd monasteries in the Wadi though now only four remain. One of these is Anba Bishoy Monastery, named for Saint Bishoi who came to the site to live in solitude. Take a wander around the gardens and observe the resident monks as they go about their daily lives, then visit the church for expansive views over the desert. Continue this afternoon to the city of Alexandria, which was founded by Alexander the Great and is often referred to as the Pearl of the Mediterranean.

Enjoy a full day exploring Alexandria – Egypt’s second-largest city. Visit Pompey’s Pillar and the Catacombs of Kom El Shuqafa, a Roman burial site dating back to the second century that wasn’t discovered until 1900. The fascinating tombs were created during a transitional period in Alexandria’s history and interestingly feature Greek, Egyptian and Roman elements. Continue to the Bibliotheca Alexandrina (once the Great Library of Alexandra), which is found where the Library of Ptolemies once stood some 1700 years ago. Finish up with a stop at the Montazah Palace and Royal Gardens, a complex featuring beautifully maintained gardens and two royal palaces built during the 19th and 20th centuries. Spend the evening by the water wandering along the corniche or relax back at your hotel.

Today, travel 100 kilometres south of Alexandria for a more sombre experience at the historic battle site of El Alamein. It was here that British and Commonwealth soldiers fought a decisive Allied victory against the German Afrika Korps that defined the North African campaign. Both sides suffered heavy losses and the memorial commemorates nearly 12,000 Commonwealth servicemen who died in the Western Desert campaigns during the Second World War. Return to Cairo in the afternoon and spend the evening visiting Tahrir Square in Downtown Cairo – the site of the political demonstrations that led to the 2011 Egyptian Revolution.

Transfer to Cairo Airport after breakfast and board a 1-hour flight to Luxor. Often referred to as its ancient name of Thebes, Luxor was the pharaoh’s capital during the height of their power and is now perhaps the world’s greatest open-air museum. Upon arriving in Luxor, transfer to your premium Nile cruise ship where you’ll unpack and settle in for the next four nights. This afternoon, visit Karnak – one of the world’s most celebrated temple complexes built over a period of approximately 200 years. Some parts date back to 2055 BC and your guided tour will take you to its finest sections. The rest of the afternoon and evening is free for you to relax, take a shopping trip through the bazaar or perhaps relax in a local teahouse.

Rise early this morning to journey into the Valley of the Kings. There are over 60 pharaoh tombs buried under the hills here, many of which are richly decorated, and your guide will take you through this spectacular place where discoveries are still being made. Learn about the funerary rites of the ancient Egyptians and the significance of the paintings and hieroglyphics, and visit the final resting place of Tutankhamun. You’ll visit another three royal tombs and continue to the Temple of Queen Hatshepsut, which is set in a spectacular natural amphitheatre. Your final stop is the Colossi of Memnon – giant statues that once formed part of an impressive colonnade – before returning to the boat for a leisurely lunch. Enjoy some time relaxing either on deck or in your cabin before setting sail upstream to Edfu, where you’ll arrive late in the evening.

This morning, you will be moored near Edfu and may have the option to venture independently into town to see the nearby temple. Continue along the river, relaxing in the sun on deck and taking in the desert hills forming a backdrop over the lush riverbanks. This afternoon, arrive at Kom Ombo Temple, sitting spectacularly on the river’s edge. The temple was built in approximately 181 BC and is dedicated to two gods – Horus (god of protection) and Sobek (god of fertility, linked to the Nile’s water). Each god has a dedicated section – north or south – and there have been recent discoveries of mummified crocodiles in the Sobek section. Afterwards, board your boat around 6 pm and continue to Aswan, arriving at around 9.30 pm.

Spend the morning visiting the temple complex of Philae including the stunning Temple of Isis, located on Agilkia Island. The temple was reassembled in this location after being saved from rising waters and is a true architectural gem featuring some of Egypt’s finest carvings. Some Egyptologists believe that Philae was the last active site of the ancient Egyptian religion and where the last Egyptian hieroglyph was written. Afterwards, return to your sailboat for lunch before boarding a simple Nile felucca and visiting either El Nabatat Island or Kitchener’s Island, home to the Aswan Botanical Gardens. These lush gardens are filled with palms and plants from all over the world. Return to the boat for another evening being rocked to sleep by the calm Nile waters.

Travel by road this morning to Abu Simbel, taking approximately 3.5 hours. Your accommodation is located right by Lake Nasser and features lush grounds, two swimming pools and fantastic views over the lake. Spending the night here allows the group a chance to visit the Abu Simbel temples at a more leisurely pace as opposed to a jam-packed half-day trip. Built during the reign of Ramesses II, these mammoth temples took 20 years to complete and feature rock-cut statues of the pharaoh and the queen, some of which are 20 metres in height. This evening, head back to the temples for an impressive sound and light show.

Travel back to Aswan, arriving in time for lunch and to check-in to the hotel. Enjoy some free time before meeting up with your fellow travellers later in the afternoon. Visit the Old Cataract Hotel – a 19th-century luxury hotel built by Thomas Cook that has hosted guests including Princess Diana, Winston Churchill, Tsar Nicholas II and Agatha Christie. Enjoy high tea in the luxurious surrounds then make the most of a free evening to find a local gem for dinner – your leader can help with recommendations.

This morning, visit a much more modern example of Egyptian engineering – the Aswan High Dam. Located 13 kilometres south of Aswan, its controversial history that required the relocation of many ancient temples and statues has, in the end, had a mostly positive impact on the region. Afterwards, head to the Unfinished Obelisk – an abandoned structure that would’ve been the largest obelisk ever erected in ancient Egypt, had it been finished! Return to Aswan for some time to relax, then meet your leader in the late afternoon to board a felucca and sail to the settlement of Elephantine Island. This island was once thought to be the home of Khnum – the god who guarded and controlled the Nile’s waters. Enjoy a sunset drink on the river before disembarking at a village to join a local family for a traditional Nubian feast. 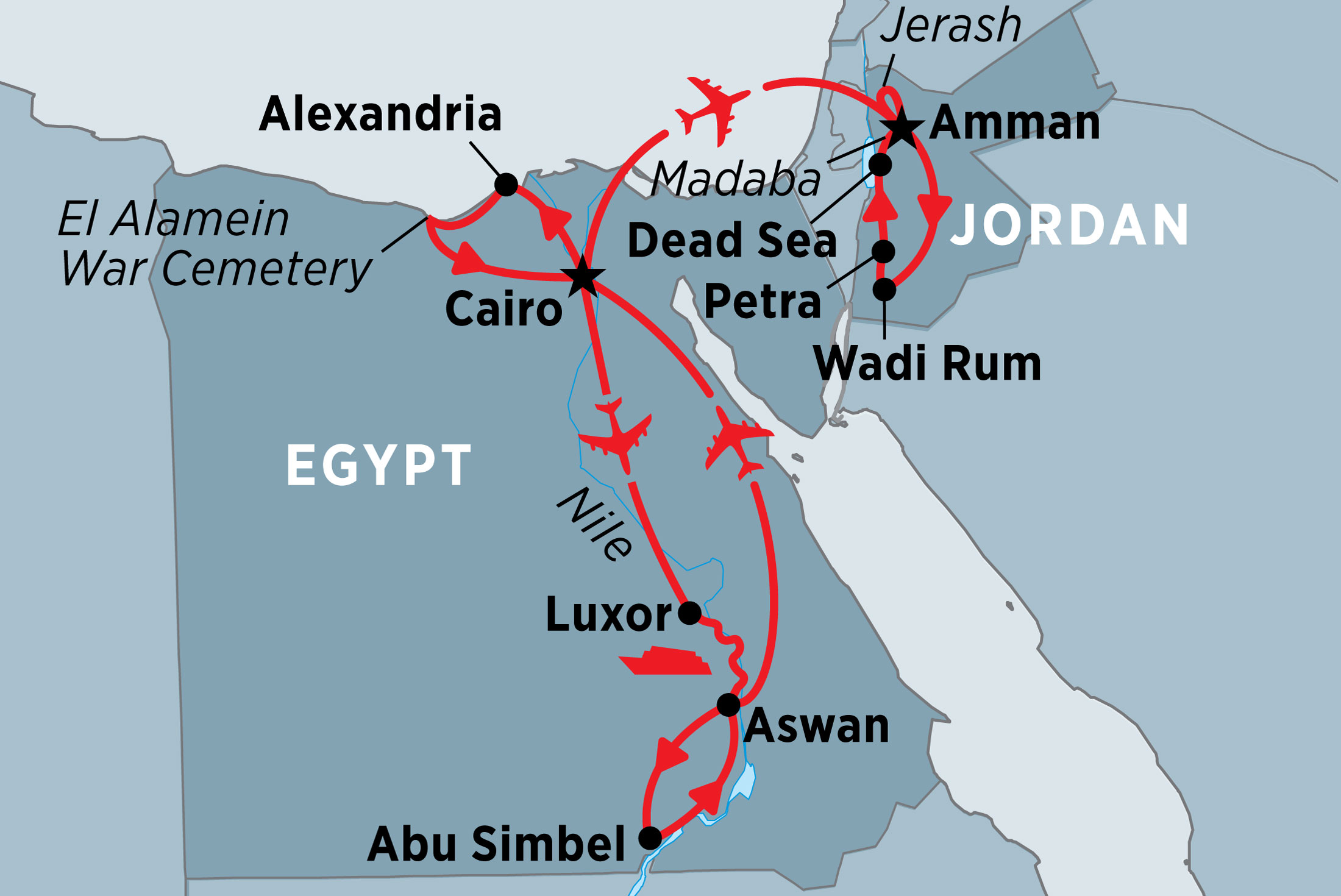