Experience a different side of Greece by staying in the medieval village of Dimitsana at a feature stay – a gorgeous 7th-century township set on top of two hills and a gorge in lesser-visited central Arcadia. Share a coffee or ‘Greek delight’ with a monk during a visit to nearby Prodromos monastery.. Visit the legendary theatres of the very first Olympic Games – the stadium, gymnasium, wrestling school, priest houses, temples and hippodrome.. With magical monasteries built on a series of ancient rock pinnacles, Meteora is one of Greece’s most extraordinary sights.. Stop over at a local tavern in the village of Vamos on Crete and enjoy a typical Greek moment with meze. Clink glasses with the locals and wash it all down with the traditional local white spirit, raki.

Embark on a curated journey exploring the best of mainland Greece and the Cyclades. Whether it’s tracing a path through ancient ruins in Delphi, visiting secluded monasteries high in the Meteora Valley, or watching as the sun sets over the white-washed domes of Mykonos, this is a country where the weight of history makes its presence felt. With plenty of opportunities to mingle with the locals, savour traditional Aegean cuisine and visit the acclaimed sites, this is a complete adventure into Greece’s sun-kissed heartland. 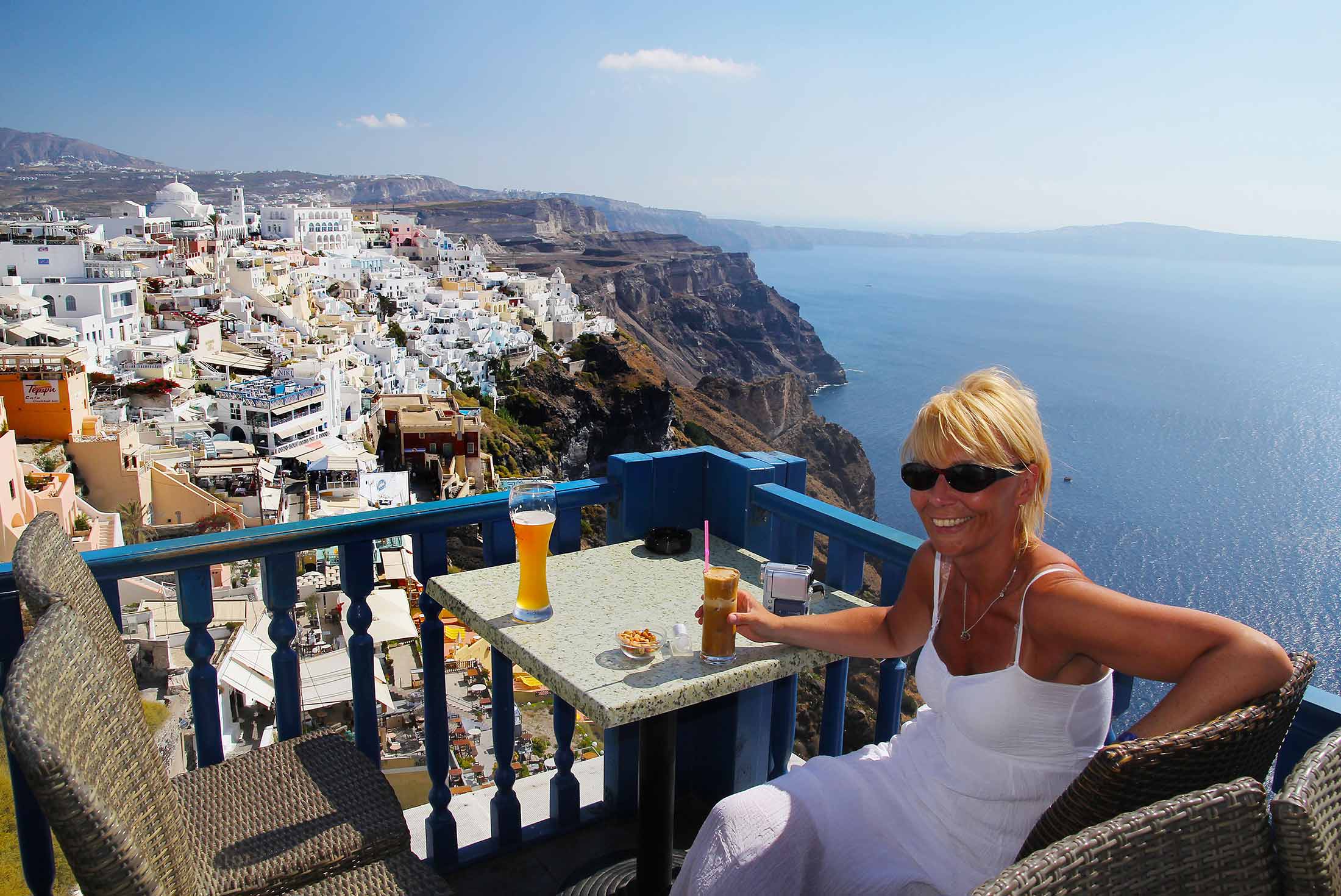 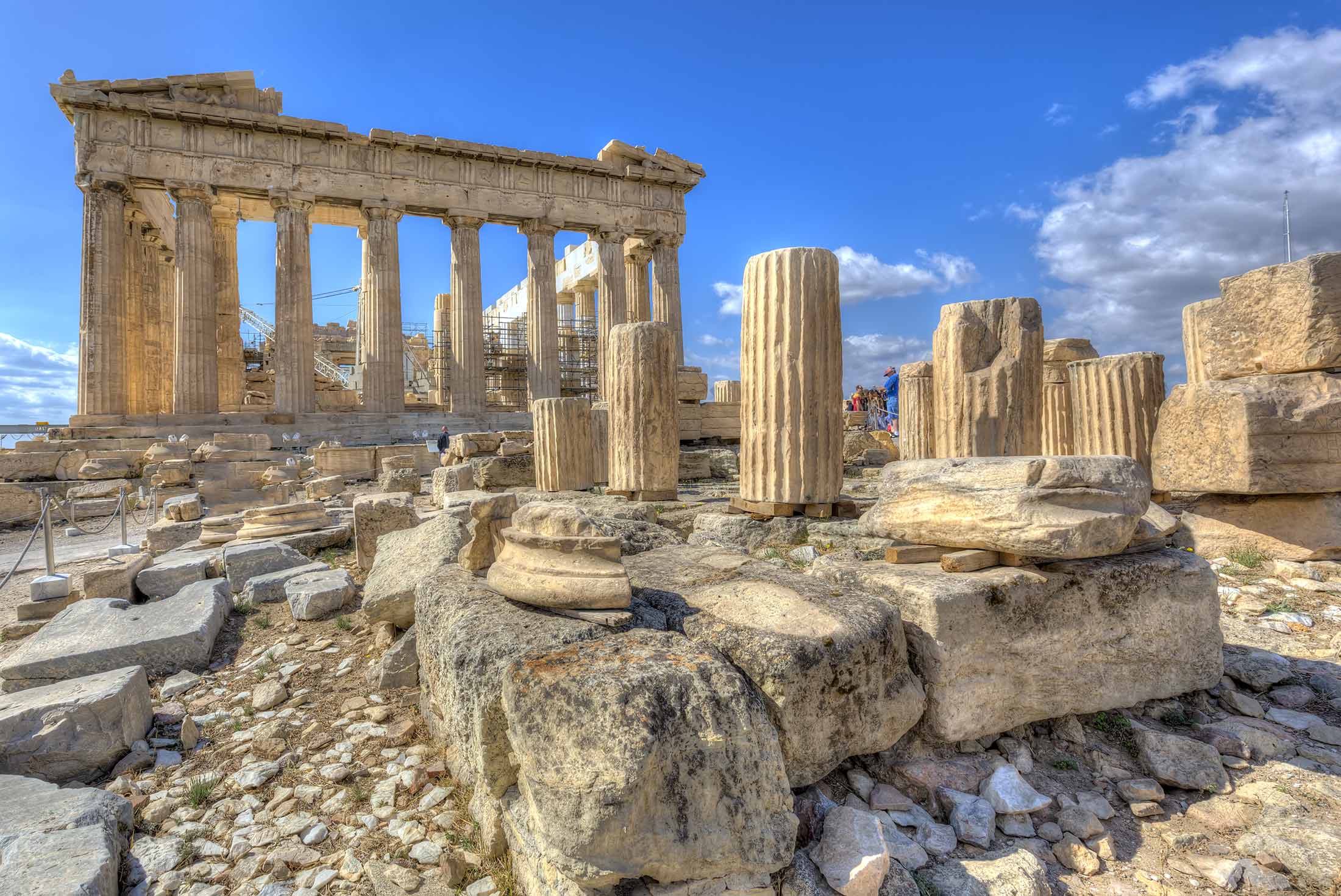 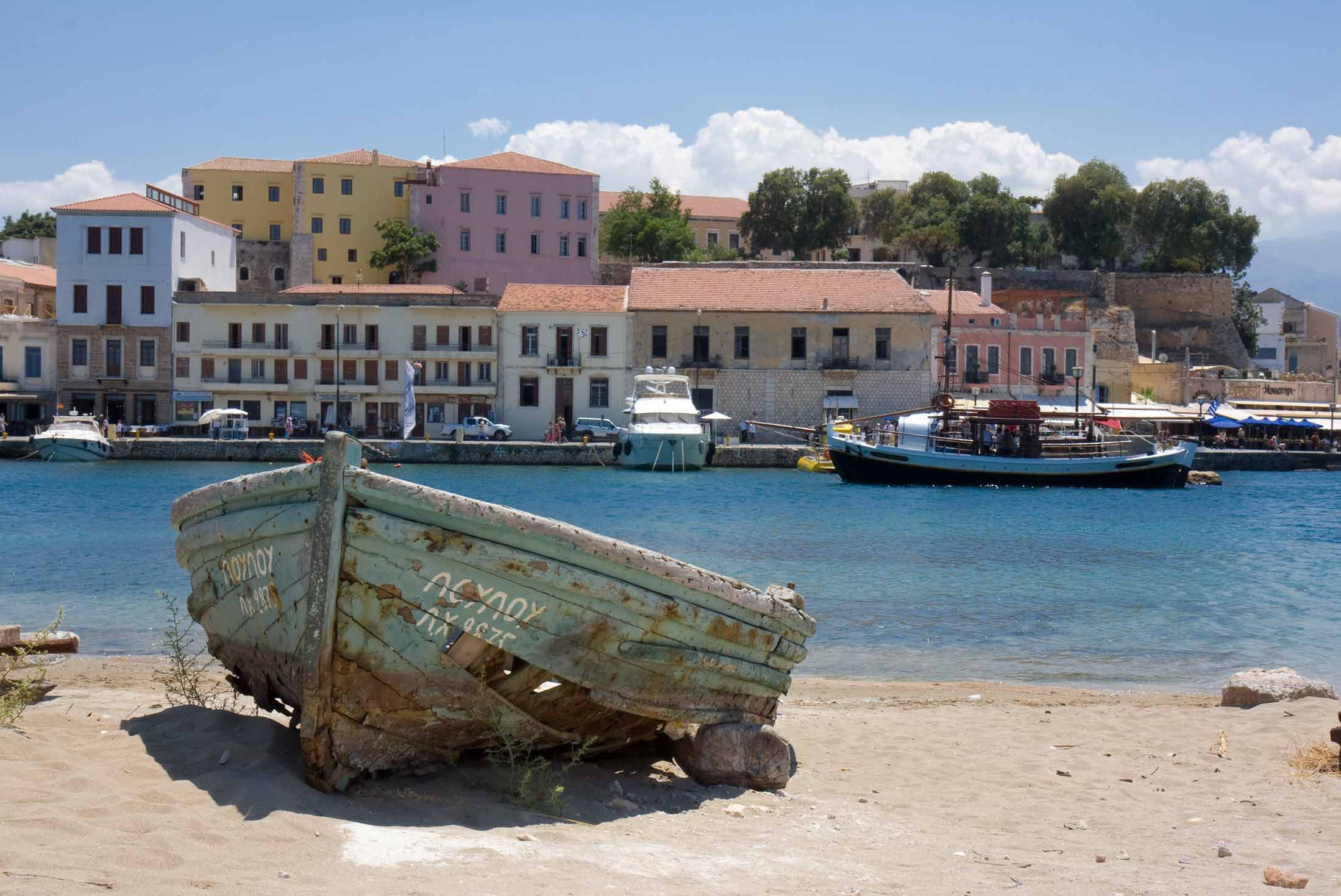 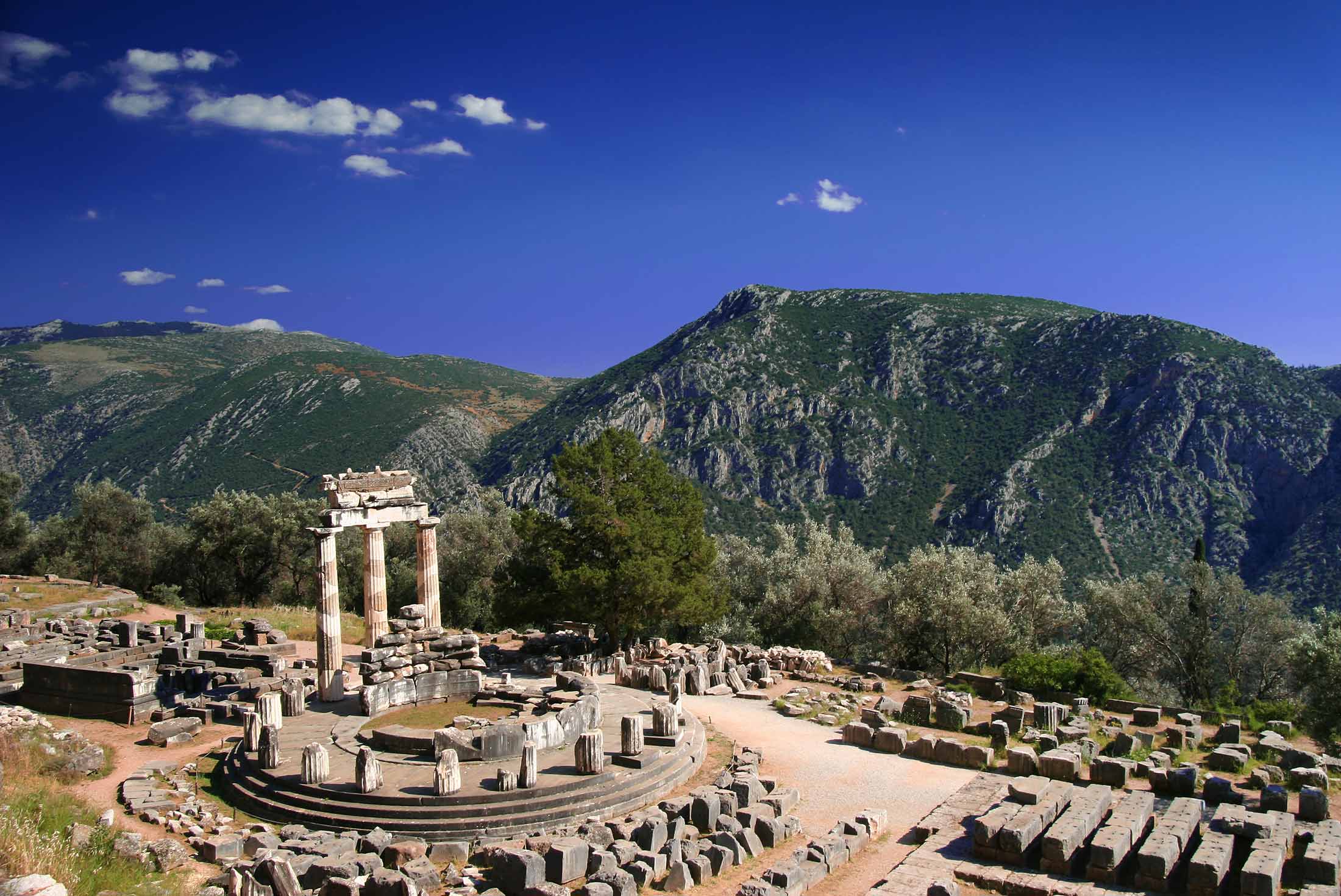 This journey begins in Athens, Greece's storied capital. There is a lot to do and see here in one of the world's oldest cities, so you may wish to arrive a few days early to allow time for exploration. The Archaeological Museum of Athens is highly recommended. There are no activities planned for today, other than an important welcome meeting this evening. Afterwards, you will head out for dinner with the group and sample some traditional Greek fare. Toast the beginning of the adventure with a glass of raki or ouzo.

Enjoy breakfast before travelling to Delphi (approximately 4 hours). On arrival visit the fascinating Sanctuary of Apollo in Ancient Delphi, home to the Delphi Oracle. Legend has it that Zeus released two eagles from different ends of the world, and Delphi was where they came together. Zeus then threw a Sacred Stone at this same point, making Delphi the centre of the world. Walk through the complex and explore the Temple of Apollo, the most important building of the site. This is where statues and offerings to the gods were housed, and where cult rituals took place. You will also see the Sanctuary of Athena, the 4th Century BC theatre and the well-preserved stadium during your visit. There will be free time to visit the Delphi Museum.

After an early morning drive (approx. 3,5 hours) arrive at the archaeological site of ancient Olympia. En-route stop at the village of Galaxidi or Nafpaktos for a visit to a traditional family-owned bakery offering pastries, stuffed with cheese, spinach, chicken or potato, and the famous sesame round bread. Chat to the owner and get updated on the latest gossip. Olympia is a complex that once comprised temples and public buildings, and was the site of the first Olympic Games. Over the centuries, and both during times of war and peace, the games were held every four years without exception. Even during periods of battle, the ancient games were bound by a sacred truce that required city states to cease fighting and travel to Olympia to compete. See all the major sites including the main stadium, gymnasium, wrestling school (palaestra), priest houses (theokoleon), Temple of Hera, Temple of Zeus and the hippodrome. After your exploration enjoy some free time to visit the museum, which houses the impressive marble statue of Hermes of Praxiteles and sculptured head of Hera. Next is the charming medieval village of Dimitsana (approx. 2 hours), where you will spend the next two nights at our feature stay. Dimitsana's charm lies in its location, set amidst magical mountains in Central Arcadia.

Today explore the central part of the Peloponnese peninsula and the spectacular Lousios Valley, one of the most scenic places in the central Arcadia region. Hidden deep in the valley, away from the threat of intruders, you'll walk to the incredible working monastery of Prodromos. This wood and clay structure, which has stellar views over the valley below, was built precariously into a rock face. The local monks will show you around on a tour of their home and offer you a coffee or the local specialty, the Greek delight. As part of your visit you'll see the splendid 14th-century frescoes decorating the rock walls inside the chapel. Further along on our hike, visit the 10th-century Byzantine monastery of Philosophou. This monastery was the base for a secret school known as 'Kryfo Scholio', which was run by monks during Ottoman rule to teach Greek children their own language and religion. Later on visit the medieval villages of Stemnitsa, Karitena (with a towering Crusader Castle) and Andritsena. Return to Dimitsana.

This morning drive to the delightful seaside town of Nafplion (Nafplio), the original Greek capital. In your free time you might choose to explore one of the town's three fortresses, or perhaps wander through the narrow winding streets filled with Venetian houses and neoclassical architecture. The seaside promenade is lined with a multitude of lively cafes and restaurants, making it a great place to watch local life unfold. If you're still unsure what to do, your friendly Peregrine Leader will be on hand to offer suggestions. Later, continue to ancient Epidaurus (Epidavros), the most famous healing centre of the Greek and Roman world. The highlight of Epidaurus is the 3rd-century theatre, one of Greece's best-preserved classical structures. The theatre has incredible acoustics and is still used today for major performances. Return to Athens in the afternoon for the final night of the tour. Perhaps head out with your group for a final farewell dinner.

There is a lot to experience in this ancient city, and you will have all day free to sightsee at your own pace. Explore the Varvakios Central Markets or take a stroll around the Plaka neighbourhood with its narrow cobbled lanes lined with tiny ceramic shops and tavernas. Later on, get updated on the next stage of your Grecian adventure with another briefing this evening – this time, there may be some extra travellers joining you! In the evening, enjoy dinner with the group at a local restaurant in the vibrant Psiri neighbourhood.

This morning travel to the town of Cape Sounion and visit the ruins of the ancient Temple of Poseidon, the god of the sea in classical mythology. The remnants are perched on the headland and surrounded on three sides by the sea, creating spectacular views of the Greek coastline. Look closely and you'll also find the ruins have been engraved with the name of English Romantic poet Lord Byron. Return to Athens in the afternoon and enjoy the rest of the day to explore. Perhaps visit the Parthenon or the Acropolis Museum, where you can find relics from Ancient Greece. Another option is to watch the uniquely theatrical changing of the guard at Parliament or see where the Olympics once took place at the Panathenaic Stadium. At dusk, pull up a chair at one of the local restaurants and dine on traditional souvlaki and ouzo.

This morning you will be transported to Athens' port at Piraeus and board a ferry bound for the island of Mykonos (often also spelled Mikonos). Ferries are a great way to travel between the islands and are the life blood of many remote islands in Greece's multitude of archipelagos. Mykonos, considered the most glamorous and cosmopolitan of the Cycladic islands, still holds on to its old-world charm and many locals maintain their peaceful island existence among the many foreigners who grace their shores. Upon arrival you will be transferred to the area of Tourlos, where the hotel is located. After settling in, you'll visit Mykonos’ charming Old Town, a captivating labyrinth of stone-paved laneways, traditional whitewashed houses and windmills. This evening you will make your way to the village of Ano Mera for a delicious dinner at a local taverna and taste the local Myconian delicacies mostra and louza.

Today you will make an excursion to the island of Delos, a short boat trip from Mykonos. Delos has a vast and interesting history and is one of Greece's most important archaeological sites. It's considered a sacred place. You will explore the site in depth and gain an insight into the island’s intriguing history. New discoveries of the ancient world are still made here from time to time. Delos is acclaimed as the birthplace of Apollo and Artemis and has been inhabited since around 3000 BC. The earliest shrines and temples were built around the 8th century BC. When the Romans set their sights on the island in 167 BC it became a free trading port and home to a flourishing slave trade market, with thousands of slaves being traded daily. In the afternoon you will take a return ferry back to lively Mykonos.

Bid farewell to Mykonos and travel by ferry to spectacular Santorini, the southernmost island in the Cyclades group. Upon arrival in Santorini's capital, Fira (often also spelled Thira), you will be met and transferred to your hotel. Enjoy a free afternoon to absorb this veritable paradise. Your leader will be able to offer suggestions on what to see and do. In the late afternoon you will view Santorini's world-famous sunset, which has been immortalised in many photos and works of art. Enjoy a sunset picnic overlooking the caldera away from the crowds. Indulge in local cheese, ham and bread, all complimented by a local grape variety and a world-class view.