Discover the many different sides of Jordan on a trip that reveals hidden treasures and iconic highlights over eight exciting days.. Be awed by the towering, wind-swept rock formations at Wadi Rum, and note how the colours change as the sun makes its way across the sky.. Journey through the desert to a traditional Bedouin camp and get to know these friendly people before spending a night under a staggeringly beautiful starry sky.. You never forget your first glimpse of The Treasury through narrow canyon walls in Petra, often referred to as the Eighth Wonder of the World. Spend a day taking in the majesty and mystery of this unforgettable place.

The sweeping desert and echoing formations of Wadi Rum, the hidden, hand-hewn facades of Petra and the ancient Roman ruins at Jerash all make Jordan a true adventurer’s paradise. With its sole focus on Jordan, this an inspiring Middle Eastern journey.Our journey ends after breakfast, in Istanbul. For those wishing to further explore this intriguing city, additional nights’ accommodation can be booked here.

Independent travel, without the stress. Peregrine’s Independent Journeys are a range of Peregrine’s best-selling group tours, available for 1-3 people. They depart on any day and come accompanied by a Peregrine guide in each location and 24/7 support from the local Peregrine office.

TRIP CHANGES FOR 2018:
In 2018 this trip will no longer run. Our regular group trip PGJE – Jordan Explorer will run with a maximum group size of 12 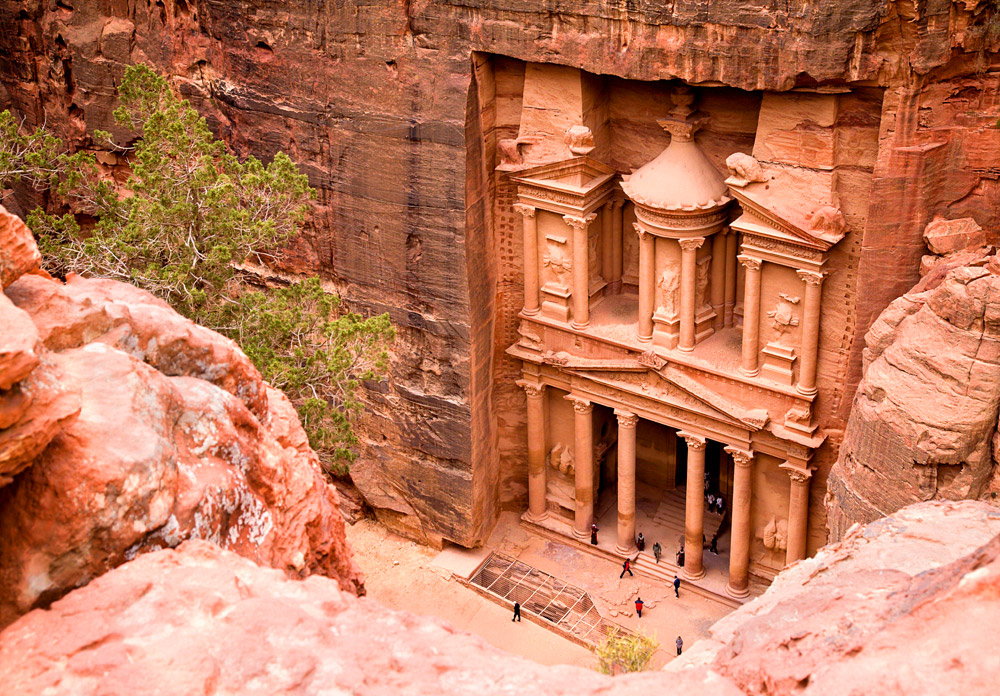 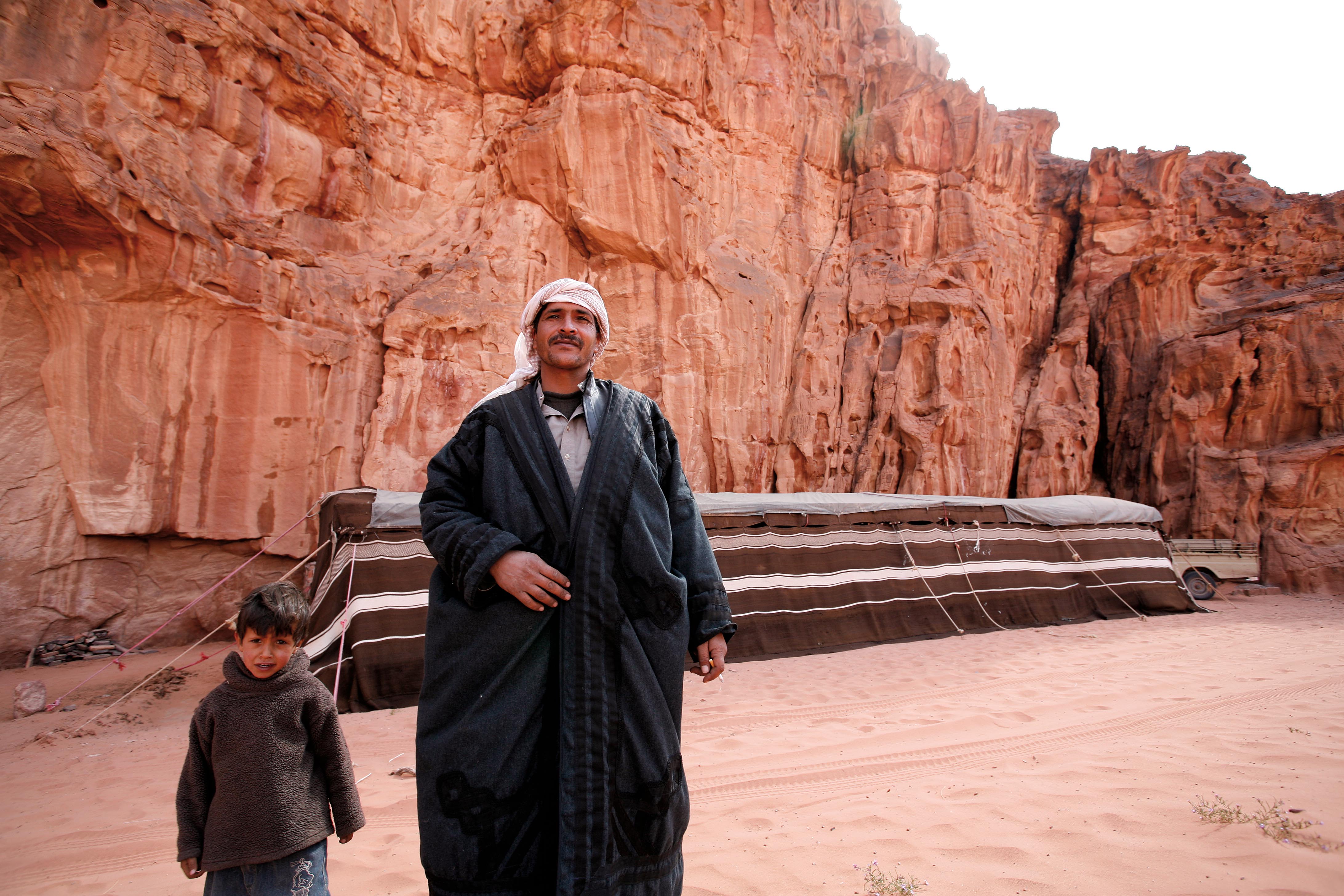 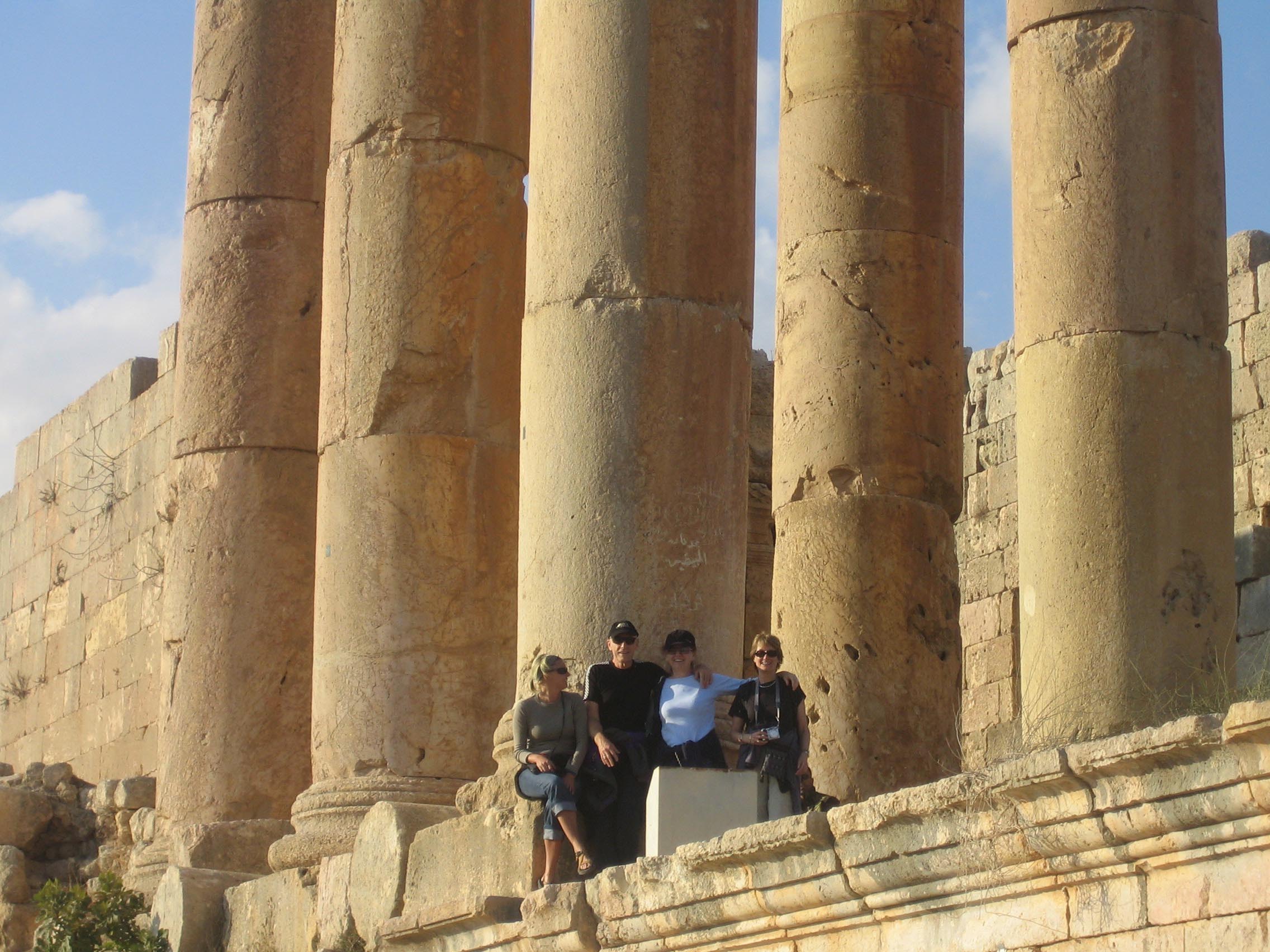 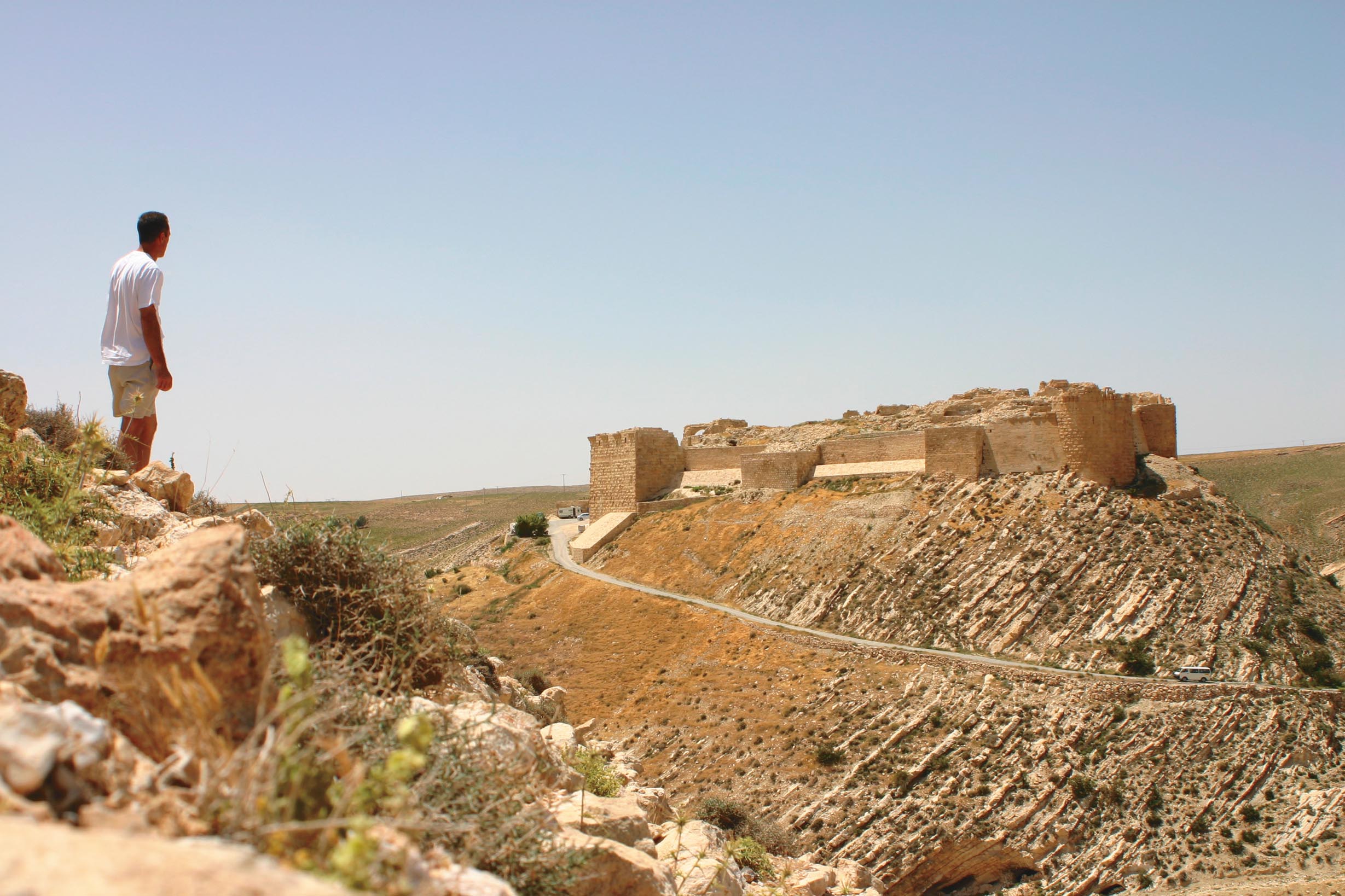 Welcome to Jordan, cosmopolitan and contemporary, yet steeped in biblical history. On arrival at Amman's Queen Alia International Airport, you will be met by your representative and transferred to your hotel. While this is an arrival day and you may arrive at any time, please note that hotel rooms are generally only available after midday. The balance of the day is free to explore your surroundings, but you will meet your tour leader who will give you options on things to do. If you arrive with time to spare then walk the streets, where you’ll soon hear “Welcome to Jordan” from the locals. Maybe pick up a coffee from one of the cafés and partner it with an ara’yes, a toastie filled with spicy mincemeat. Maybe head to the Old Town’s Roman Amphitheatre, find fine culture at the Jordan National Gallery of Fine Arts, look down on the city from the hilltop Temple of Hercules, or begin your trip with a relax in a Turkish bath house.

After breakfast today you’ll leave the Jordanian capital of Amman and journey down the Desert Highway, with the beach resort of Aqaba as your destination (approximately 4 hours). On arrival you will be met and transferred to your hotel. Aqaba is the only port city in the country, lying at the very northern tip of the Red Sea, and you will have the rest of the day free to explore the town and port. The small Ottoman Mamluk Fort, dating from the 14th century and from where Lawrence of Arabia rode to Cairo, is worth a look. Otherwise most of the fun is to be found in the water. Acquaint yourself with the hotel's pool, or head to the beach – some of the best snorkelling in the world can be found around the untouched coral reefs just south of the town.

This morning you will see the contrast between the sparkling waters of the Red Sea and an ochre sea of desert on the way to spellbinding Wadi Rum. Drive approximately 1 hour into this desolate yet achingly romantic landscape the way the locals do – in rather old, rickety (but reliable) jeeps operated by the local Bedouin Community. After lunch (not included) in the small village of Rum and a browse around the visitor's centre, you will visit some of the most stunning desert scenery you’ll ever witness. Wadi Rum is a truly beautiful place, where great gouts of rock on a carpet of bright red sand have been eroded into fantastical gnarled shapes. Visit several of the distinctive rock formations and soak in the vast silence of this lunar-like landscape. Wadi Rum is probably best known for its connection with the enigmatic British officer T.E. Lawrence, who was based here during the Great Arab Revolt of 1917-18. Today you will also meet your new Bedouin Friends, the backbone of Jordan. Journey through sweeping swathes of desert, wondering how this place could be liveable until you soon get your answer – a group of dark tents low-pitched to the ground: a Bedouin camp. Meaning ‘Desert Dwellers’ in Arabic, the Bedouins are a semi-nomadic people considered by many to be the predecessors of the settled Arabs, and in Jordan up to 40 per cent of the general population is believed to possess Bedouin ancestry. This might explain the legendary hospitality of the Jordanians – in traditional Bedouin culture, a huge onus is placed on taking in and feeding any visitor, and so a very warm welcome is assured on your arrival. Spend the night in this incredible location, deep in Wadi Rum and under a huge expanse of stars.

After waking up in the unique surrounds of the Bedouin camp this morning, you will enjoy a walk around the area (the length of the walk will depend on how energetic you are feeling) before scaling one of the large dunes to enjoy sensational views of the surrounding area. Keen photographers will be delighted. You will then take 4WDs from your camp back to the main entrance, which is opposite the Seven Pillars of Wisdom, the mountain named after Lawrence of Arabia’s book. The visitor's centre here is also a great spot to buy some jewellery and handicrafts, mostly made by a women's co-operative that is aimed at supporting traditional local industries. You will then continue your journey to the fabled city of Petra (approximately 2.5 hours). On arrival there is time in the afternoon to check out the town that has grown up around the site, and to just relax in preparation for a big day of exploring Petra tomorrow.

Petra is justifiably on most people’s list of ‘must-visit’ places. It is the jewel of Jordan, the lost city of the biblical Nabateans, an impressive series of tombs and dwellings hidden behind ornate façades carved directly into the rock. Dating back to the 6th century BC, the site was lost to Western minds until it was rediscovered in 1812 by a Swiss explorer. The iconic Petra view – the Treasury's glorious façade, glimpsed from the narrow cleft known as the Siq – is arguably the single most striking sight of the entire region. The first taste of this exquisite craftsmanship among such stark scenery is a moment that manages to be both eagerly anticipated and also an almost surreal surprise. The Siq leads through the rock and is sometimes only a few metres wide, with walls soaring up to 180 metres on either side, and it is impossible not to imagine the armies and traders who made their way down here in the ancient times. Petra's greatest surprise, however, is its size. With your guide you will explore the old Roman road, amphitheatre and several old tombs. You will also climb up to the second beautiful façade of the Monastery, from where you will have a magnificent view of the entire site. This is a memorable day exploring a truly extraordinary destination, a highlight of your trip. There is a cafeteria on the site, where you can enjoy a light lunch. In the mid-afternoon, return to your hotel where it won't take much convincing for you to try a soothing traditional Turkish bath. The rest of the day will be at your leisure – perhaps take the chance to witness Petra by night. Seeing the Treasury plaza lit up by flickering candle light while Bedouin music plays is a magical experience.

Petra is an incredible site and almost demands more than one visit. If you want to see more, then get up early to soak in the dramatic setting, walk to extra sites like the High Place of Sacrifice, and just try to comprehend the history and life of a city that was once able to challenge the might of Rome. Later, the ancient Crusader castle at Shobak makes as imposing sight as you make the short drive up to it. It was originally built to protect the eastern flank of the Latin Kingdom and its trade routes to the sea before it fell to Saladin in 1189. Stroll the site and discover a small chapel, original gatehouse, and find out where a long, dark secret passage leads. Continue half an hour to the ancient village at Dana, on the edge of the Dana Biosphere Reserve, where local artisans sell attractive silver jewellery and charms. Drive on to Madaba (approximately 3 hours), home to a number of fine Byzantine mosaics. Visit the Greek Orthodox Church of St. George and see an impressive mosaic map of the Holy Land that clearly depicts Palestine and Lower Egypt around 550 AD. You will arrive in Amman in the late afternoon, where you can spend the evening in one of its several fine restaurants. Notes: Please be aware that Kerak Castle is not included in your tour, as it is often very congested and busy. However, if there is sufficient interest among members of the group, your leader can also arrange an optional visit to Kerak Castle. Many travellers however prefer to spend extra time in Amman.

Today you will leave Amman for a short drive north (approximately 1 hour) to Jerash, once one of the grandest ancient Roman cities in the world. These are some of the best ruins Greco-Roman ruins around. Reaching its zenith as a favourite of the emperor Hadrian, it has a striking collection of archways and theatres, baths, public buildings and colonnaded streets, and is a beautiful place to spend a morning exploring. Grand ionic columns encircle the city's centrepiece, the Oval Plaza, a wonderfully atmospheric place to linger after exploring Jerash's riches. You'd better have packed your swim gear, because in the afternoon you can wash off the dust from exploring ruins with a dip like no other. Drive approximately 1.5 hours to spend the afternoon on the shores of the Dead Sea. Named for the dearth of life in its waters, this lake is so intensely salty that the density of the water makes swimming and getting underneath the surface very difficult. Floating on the surface without any sort of lilo makes for a unique pleasure though. Maybe grab a handful of the shoreline’s mud and slick it over your body on the way back in – it’s full of nutrient-rich natural minerals and will leave your skin feeling luxurious. Afterwards you will return to Amman for the evening (approximately 1 hour). Maybe spend your final night at one of the many bars and restaurants in West Amman, or ask your leader about the traditional cafes dotted around the city where locals spend their evenings.

Your trip will end today after breakfast. Check-out time is usually around 12 noon and you are free to leave at any time. If you have arranged a private airport transfer you will be advised of the pick-up time. Additional accommodation can be pre-booked if you wish to spend more time exploring Amman. 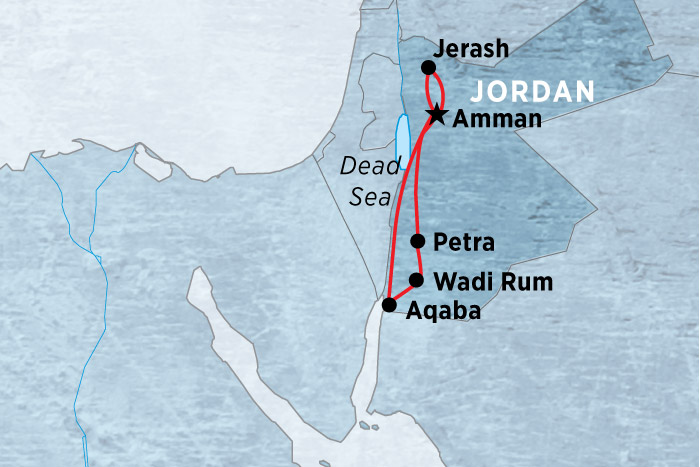