Truly off the beaten track, Kazakhstan sees few travellers, especially outside Almaty and capital Astana. Feel the remoteness of Central Asia on this one-of-a-kind expedition. Visit dusty Baikonur, the hub of the Soviet – and now Russian – space program. Check out the Cosmodrome, the world’s oldest and largest spaceport.. Explore the Aral Sea, which suffered environmental and humanitarian devastation in the 60s due to Soviet irrigation projects. Enjoy a homestay with local friends and meet those working with an NGO to restore the area. Discover the history and architecture of the Silk Road, visiting ancient mausoleums and mosques on guided tours in the cities of Turkistan, Sayram and Shymkent

Where can you explore space without ever leaving earth? In Kazakhstan, of course! Seemingly in the middle of nowhere on the dusty Kazakh steppe is the settlement of Baikonur, the seat of the Soviet – now Russian – space program. Beginning in cosmopolitan Almaty, join us on this exploration through Kazakhstan, from the shrunken Aral Sea to the ancient city of Turkistan and the Silk Road portals of Sayram and Shymkent. Ready for a rare, fascinating adventure through one of the least-explored corners of the earth. 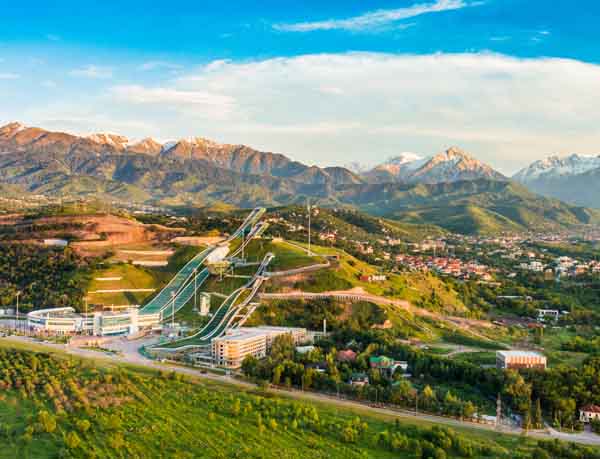 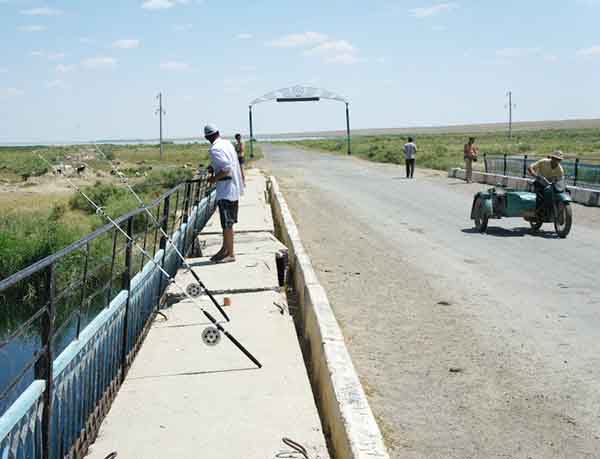 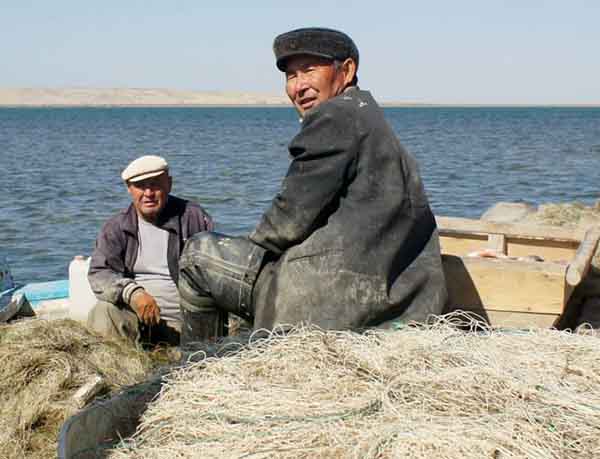 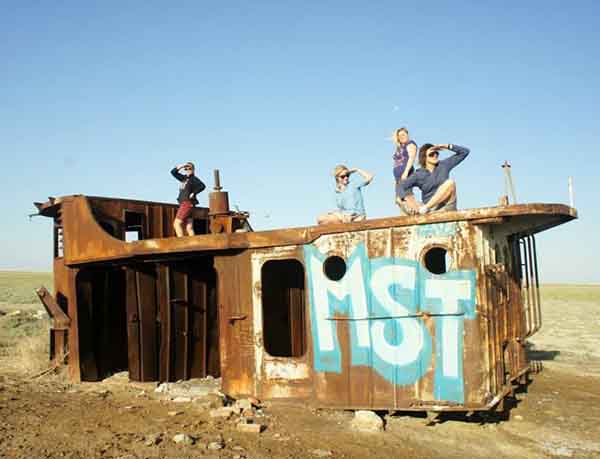 Welcome to Almaty, Kazakhstan. Your expedition begins with a welcome meeting at 6 pm in your centrally-located hotel. Please look for a note in the hotel lobby or ask the hotel reception where it will take place. We'll be collecting your insurance details and next of kin information at this meeting, so please ensure you have all these details to provide to your leader. If you arrive early, perhaps get your bearings with a walk around town. Until the recent transfer of the capital to Astana, Almaty was Kazakhstan's foremost city. Set against the dramatic backdrop of the Tian Shan Mountains, it is still very much the country’s commercial and cultural centre and perhaps Central Asia’s most cosmopolitan city.

Be prepared for a long travelling day today from Almaty to Aralsk. We head out early to catch our flight to Kyzyl Orda (approx. 1.5 hrs), then another 7 hrs land travel will take us to our destination for the night Aralsk. Aralsk was the main fishing port on the Aral Sea, once one of the world’s largest lakes before the rivers that fed it were diverted by Soviet irrigation projects in the 1960s. The devastation caused, both environmental and humanitarian, was colossal: huge numbers of people lost their livelihoods, and the local climate and landscape was drastically changed forever. A number of NGOs are now working in the region to restore water (and life) to the communities that once thrived here. During our stay in Aralsk, we’ll visit one such organization – Aral Tenizi, where you’ll have the unique opportunity to hear about their projects and support the work they do. The town still has very limited infrastructure, but the locals are keen to share stories with travellers. You’ll spend the evening in a local guesthouse or homestay. Depending on the group size, the group may be split between a few houses. Accommodation is basic but cosy and comfortable with communal shower and toilet in the house.

Take a tour of the local area by 4WD today. We'll drive along the former seabed to Tastubek village where you’ll see glimpses of what used to be the biggest body of water in Kazakhstan. If it's good weather you might see locals fishing or swimming. If you feel like it, you might even take a dip yourself. We also visit Akespe - a disappearing village. Akespe used to be a fishing village on the shore of the Aral sea, but now it's being gradually taken over by sands and within a few years may be totally submerged. Tonight is spent in our guesthouse or homestay.

Today, leave Aralsk and transfer to Baikonur by private vehicle(approximately 5 hours). Located on the desert steppe of Kazakhstan, Baikonur has been leased out to the Russian Federation by the Kazakh government until 2050. The town was constructed to service the huge Cosmodrome that now dispatches astronauts the International Space Station. Firstly unofficially named as Zarya (Russian for sun rise), and later as Leninskiy and Zvezdograd, ("star city") , it was renamed Baikonur by Russian president Boris Yeltsin in 1995. Like a homage to the past, our hotel in Baikonur is decidedly Soviet in character. If our visit coincides with a launch and availability is tight, we may be in triple rooms here.

Get ready for a full day of exploration today. Visit the Baikonur Cosmodrome, the world’s first and largest operational spaceport (Sputnik 1, the first artificial Earth satellite, was launched from here). Stop in at a nearby museum where you’ll see a range of space artifacts, and check out the cottage once occupied by Russian astronaut Yuri Gagarin, the first human to ever venture into outer space. It is unlikely that our visit be at the same time as a launch as at the time of planning our 2018 departures the schedule had not yet been finalised and is notoriously unreliable even when announced. But if you are lucky enough to witness a Soyuz rocket blast into space then no doubt it will be one of your most memorable travel experiences! We stay in the hotel in Baikonur again tonight.

Today is another travelling day, on a different form of transport this time - train. From Kyzyl Orda it's around 7 hours to our next destination of Turkistan. So grab some snacks and sit back and relax as the landscape rushes by. We arrive in Turkistan mid afternoon. Located in southern Kazakhstan, the city of Turkistan contains more historical relics and cultural sites than any other place in the country.

This morning, we'll head out on a city tour, the highlight of which is a visit to the Kozha Akhmed Yasaui Mausoleum, Kazakhstan’s most iconic building. The stunning blue and while tiled Mausoleum is the final resting place of a great Turkic holy man and Sufi. Built by Tamerlane, it is said that three visits here are equal to one visit to Mecca. As it is a religious site, we recommend that women wear a headscarf when entering. In the surrounds you'll find a rose garden, other monuments, an archeological museum and a mosque, which are all included in the ticket price. Then we'll continue our journey to Shymkent where we will board our overnight train tonight to take us back to Almaty. On the way, we'll stop at the Otrar ancient settlement. It was first excavated in 1969 and has a history dating back to the 1st century A.D. Remnants of palaces, mosques and bath houses can still be seen today. It is also where Genghis Khan's army is said to have fought heroically (though unsuccessfully) when the Mongols first invaded Central Asia. There'll be time for some exploring in Shymkent and dinner together before we board the train. We travel in kupe class, which is 4 berths per compartment with a lockable door. There are toilets and hot water for drinks at the end of each carriage. While we aim to group our travellers together, please be aware that compartments are not segregated by gender and you may be sharing with other travellers.

After arriving into Almaty this morning, we'll make a stop to have some breakfast, then embark on a city tour of Almaty. The development and wealth you’ll see on display as you walk the streets comes from the country's main export – oil (Kazakhstan is one of the world's top five oil-producing nations). Visit Central Square, the colourful Zenkoff Cathedral and Medeo, a huge outdoor ice-skating and bandy rink in a valley just outside the city. We’ll also visit to Panfilov Park, dedicated to the 28 guardsmen who died defending Moscow against German tanks in WWII, and check out the Museum of Kazakh Musical Instruments and the State Historical Museum, which features a great collection of cultural relics. Finally, summit Kok Tobe Hill for great views over the city.

It's a free day today for you to further explore the city, or relax in one of the many leafy parks or cafes dotted around the place. The Arasan Baths are well worth a visit for a true Rusian sauna experience. Almaty has always been heavily influenced by its connections with Russia and was once one of the USSR's regional capitals. You’re likely to hear more Russian spoken here than Kazakh, but now that the nation is independent a resurgence of Kazakh language and culture is underway. In the evening, head out for a final dinner with your group and leader.

Your trip comes to an end after breakfast today. As no activities are planned, you are free to depart your accommodation at any time.