Lisbon and Porto are two of the most visited cities in Portugal, and for good reason. Explore a medieval fortress in the middle of cosmopolitan Lisbon and sweeten your day with a port tasting in, well, Porto. Admire beautiful green pastures as you drive along roads bordered with flowers on your excursion to Capelinhos volcano.. Enjoy a whale watching tour on a small boat excursion with an experienced guide who’ll offer insights into the lives of these amazing creatures. Hike to the top of Pico de Pedro, the highest point in all of Portugal!

Although modern Portugal can be credited for its contributions to art, architecture and world-class dining, there’s a distant remnant of the Old Empire lying far from the mainland. From the rolling blue hydrangeas of Faial, the steep cliffs of Sao Jorge and the black volcanic soil under the vineyards of Pico – the Azores offer a delightful insight into both island and Portuguese living. Discover a new side to ancient Portugal on this island-hopping Atlantic adventure, starting from mainland Lisbon and ending in Sao Miguel, capital of the Azores. 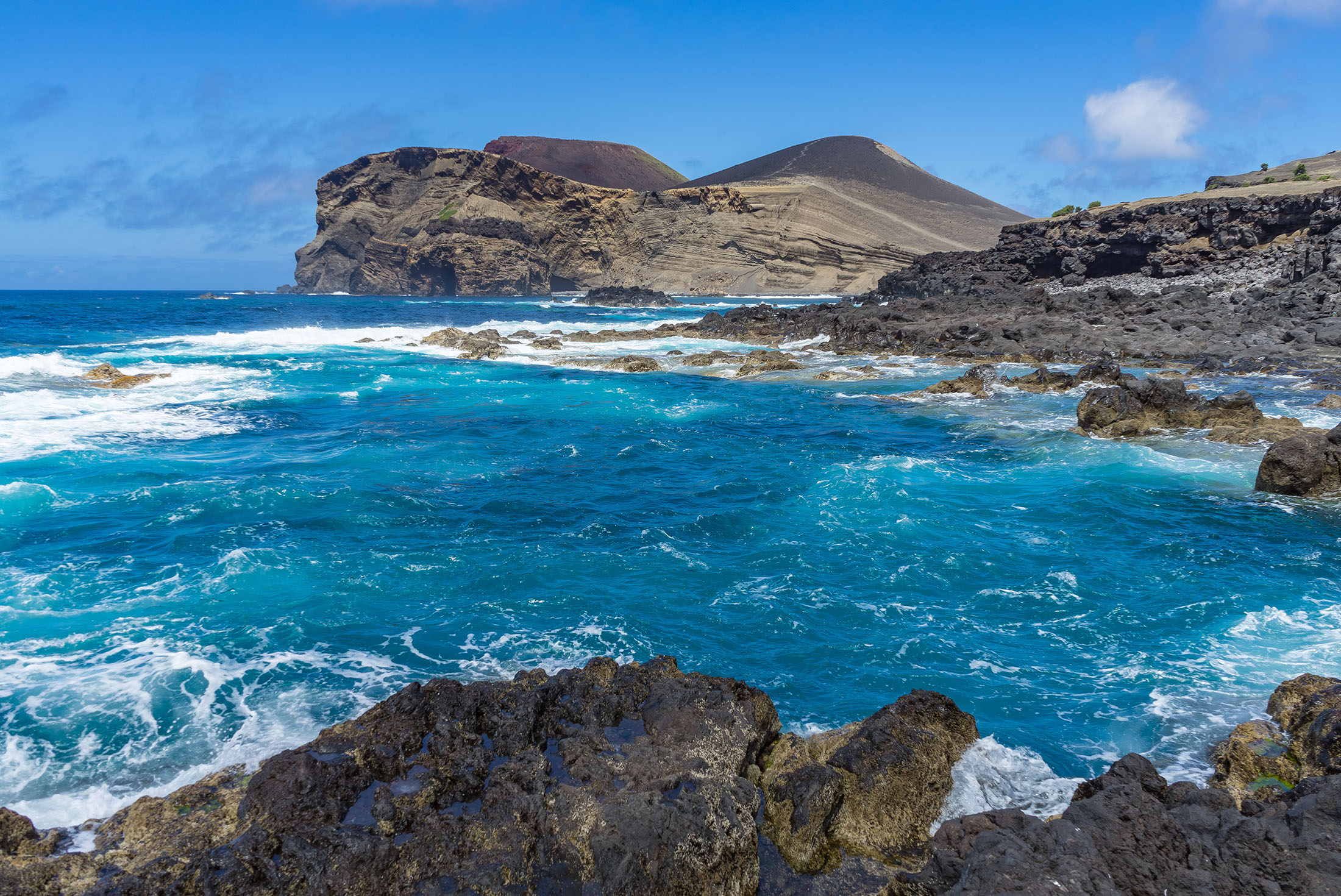 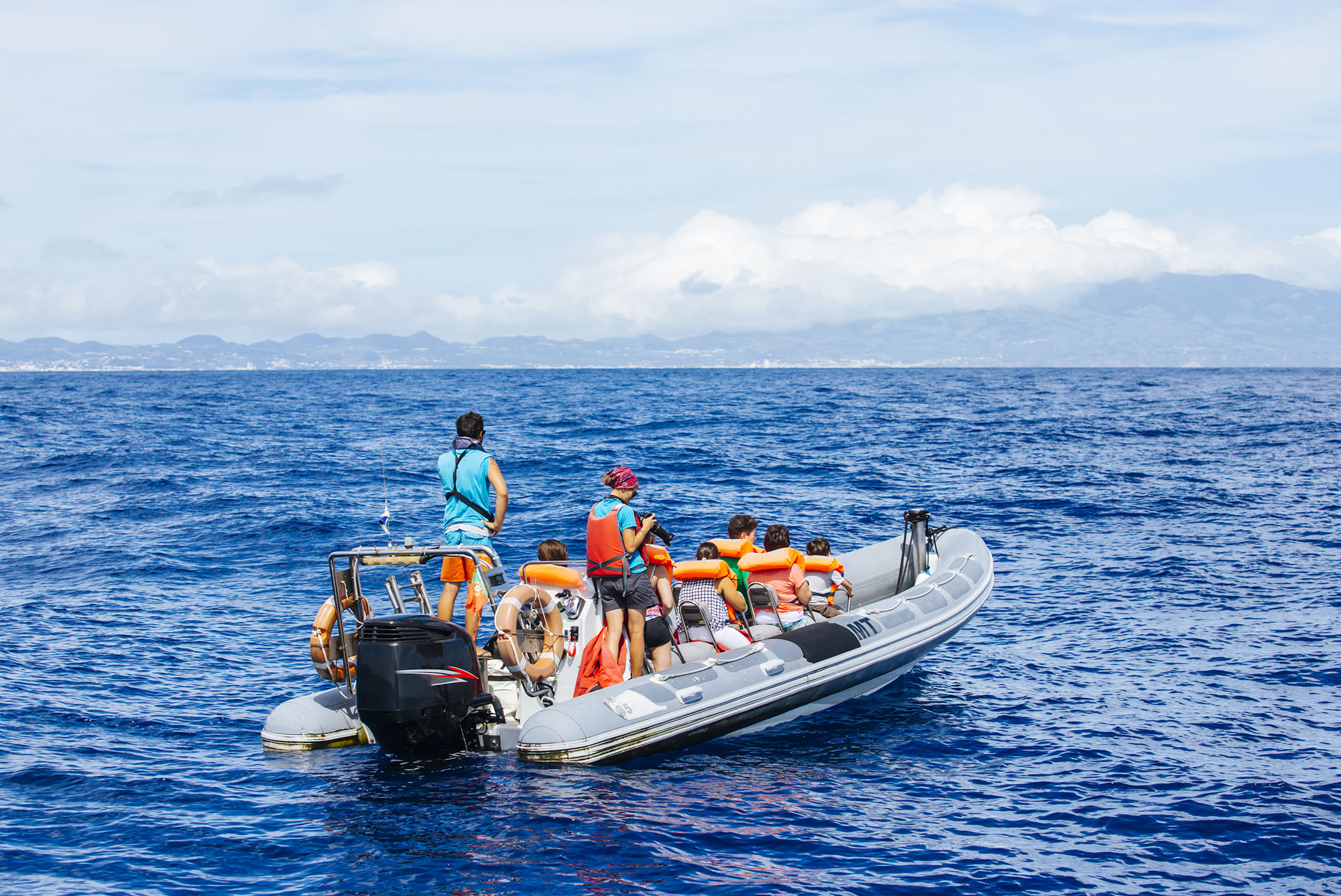 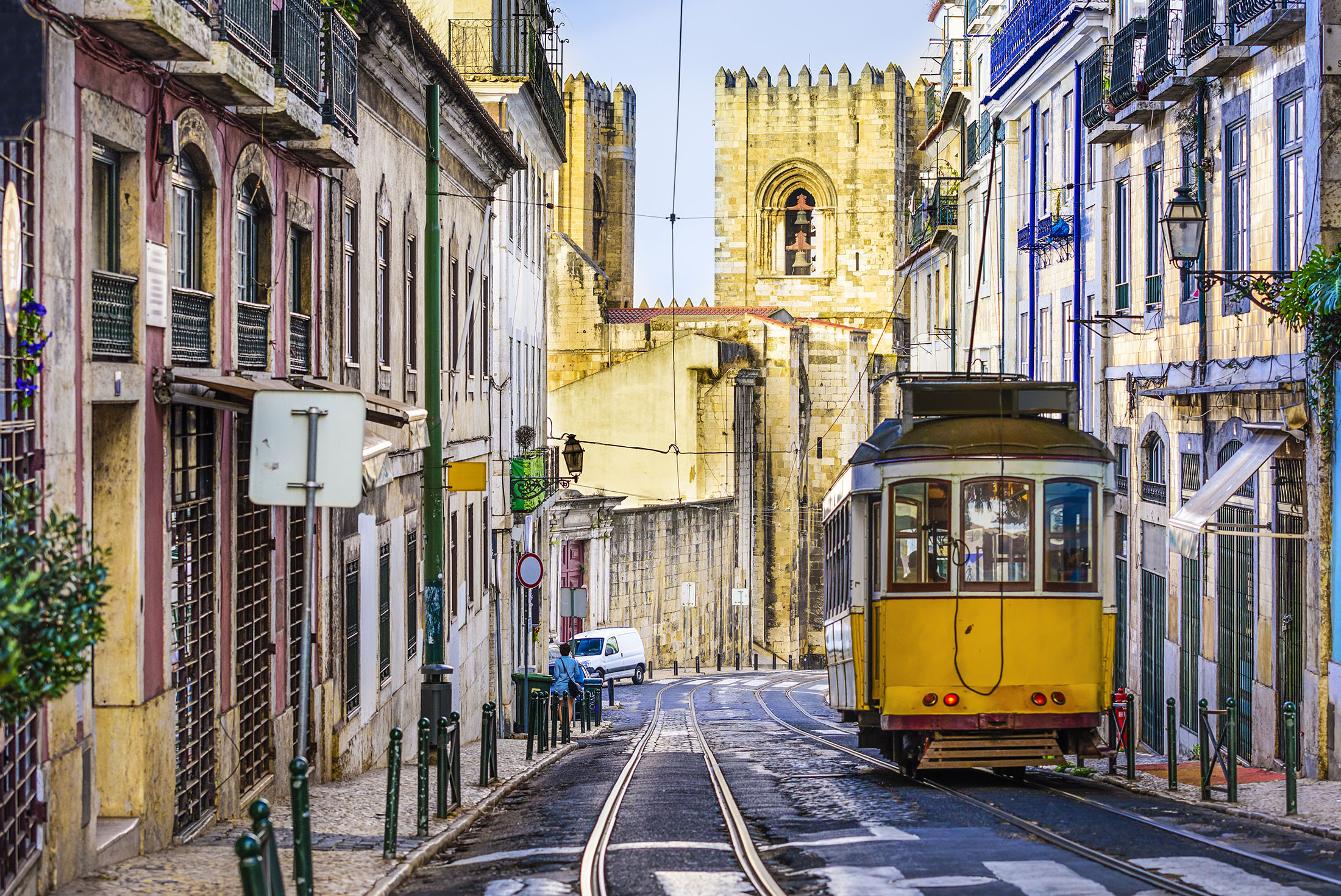 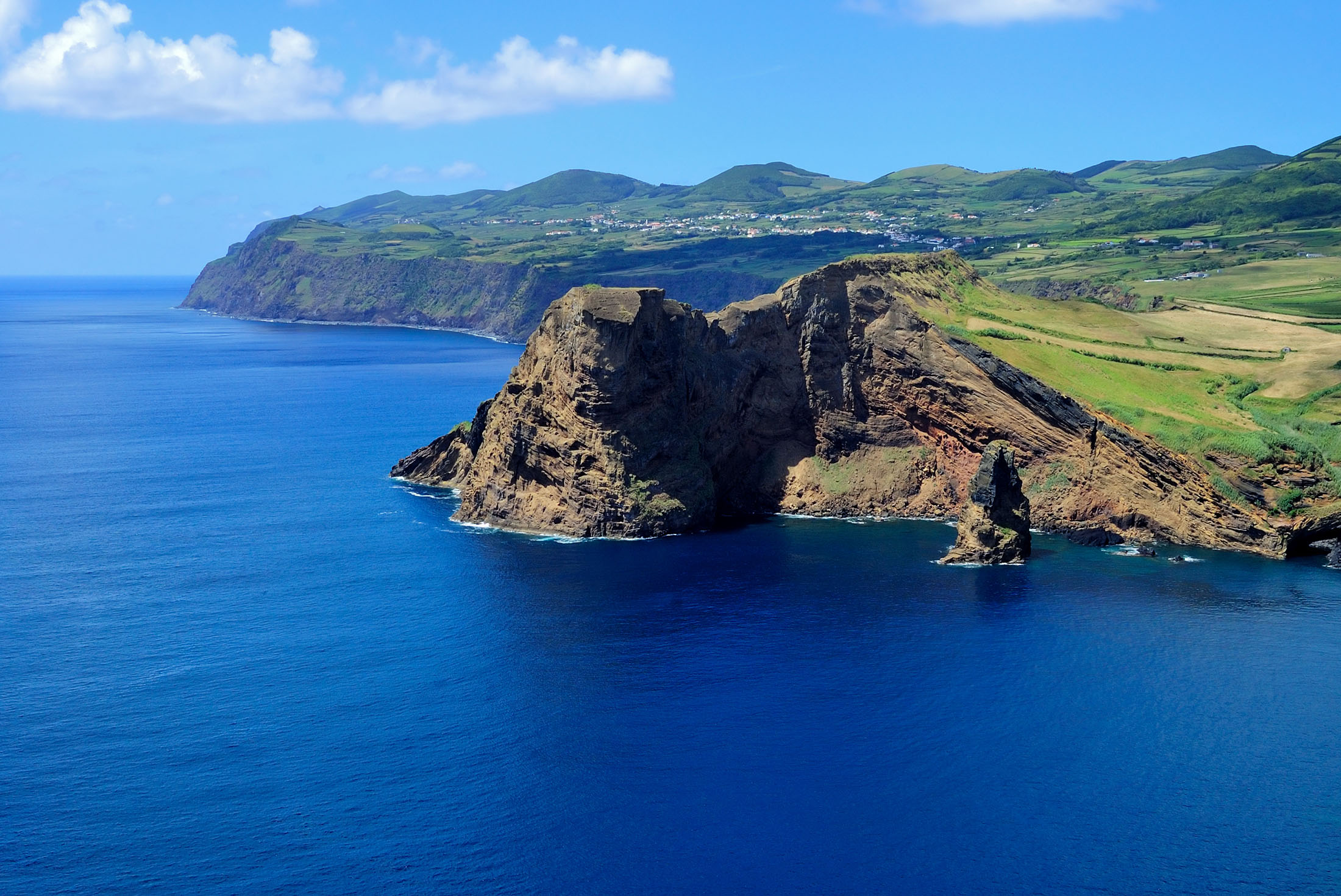 Welcome to Porto, Portugal. This adventure begins with a welcome meeting at the hotel at6pm. Please double check with reception to confirm the time and place. If you're going to be late, please inform the hotel reception. We'll be collecting your insurance, passport details and next of kin contact number at this meeting, so please have these on hand. If you can't arrange a flight that will have you arrive at the hotel by early evening, you may wish to arrive early. We'll be happy to book additional accommodation for you (subject to availability). If you’ve arrived early, perhaps take some time to explore a city revered as one of Portugal’s most romantic. You could wander through the medieval riverside district, try to find the impressive Porto Cathedral or even hunt down some of the city’s brilliant smoked meats before meeting up with your group in the evening.

See the sights and sounds of Porto on a guided orientation walk through the Ribeira district in the morning. The World Heritage-listed district is filled with a collection of twisting alleys, criss-crossing staircases and baroque churches. You’ll discover one of Portugal's most romantic cities, passing majestic bridges, the medieval riverside district with its cobbled streets, merchants’ houses and cafes, the grand Porto Cathedral, the Tower of Clérigos, and the impressive hall of Porto’s Sao Bento Railway Station. Besides the iconicsights, Porto is also well known for one more thing; as the birthplace of the fortified wine, port. Most of the grapes are grown and harvested in the nearby Douro Valley. Perhaps pick up a glass of this sweet wine and learn about the history behind Portugal’s favourite tipple at an optional wine tasting. Alternatively, spend the evening soaking up the atmosphere of this coastal city in Porto’s numerous cafes and restaurants.

Today, travel by direct train to the city of Lisbon, one of Europe’s most pleasant and affordable capital cities. The city combines the best of Portuguese life with its charming architecture, multicultural population, delicious seafood and non-stop nightlife. On arrival, take a guided orientation walk to help find your feet. There are some great modern and ancient art museums to check out, such as the Calouste Gulbenkian Museum, the National Museum of Contemporary Art or the National Coach Museum. The rest of the day is free, so perhaps roam the charming narrow streets and find one of the many outdoors restaurants and cafes to relax in – watching life go by is definitely one of the best ways to relax in Lisbon. As the sun goes down, some of Lisbon's best nightlife centres on the neighbourhood of Bairro Alto, where you can enjoy an emotional fado performance (traditional Portuguese music).

Depart from Lisbon to Faial Island, where your exploration of the Azores begins. Sometimes referred to as Ilha Azul (Blue Island), the Portuguese poet Raul Brandao famously took note of the iconic blue hydrangeas that bloom on Faial in the summer months, quipping “The man that had the idea to border the road with these plants should have a statue on the island”. On arrival, you’ll visit the island’s resident volcano, Capelinhos, and tour the museum at the eruption site. The volcano last erupted in 1957 in an event that permanently changed the island - adding an extra kilometre of land to its mass and blanketing the surrounds in five metres of volcanic ash. After returning from the volcano, enjoy a free day around the local port town of Horta. Perhaps have a drink at the famous Café Sport and share a tale with the travelling yachtsmen who often visit the bar.

Travel from Faial to Ilha do Pico. Known also as the Ilha Preta (Black Island) for its black volcanic earth, Pico is the proud home of UNESCO-designated vineyards that played a major part in the community’s development. Later in the day, embark on a whale-watching tour with the rest of your group. Up until 1980, the island supported a substantial whaling industry due to the deep waters of the surrounding Atlantic. Fortunately, the end of the industry means that whale watching is now a popular activity for sea-faring visitors.

Continue onwards via one way ferry to Sao Jorge Island, one of the most scenic islands in the Azores thanks to its steep cliffs and narrow landmass. With a free day to explore, there’s plenty to do. Sao Jorge is home to some of the best walks in all the Azores, taking you for views off abrupt cliffs, steep descents and of course, the glistening sea. If you’d rather kick your feet up, simply soak in the sun in Velas, the island’s capital. Take time to visit one of the many local bars, try your hand at bird-watching or sample some of the region’s famous (and strong) cheddar.

Make the most of a second day on Sao Jorge Island with a guided hike along the Pico do Pedro trail, an intermediate-level 17 kilometre trip along the island’s stunning mountain range. Begin at the foot of Pico do Pedro, passing by Pico da Esperanca – the highest point on the island. From this kilometre-high peak, wander the outskirts of the underlying crater and enjoy spectacular views of the lake below. You’ll then pass by Pico Areiro, Pico Pinheiro and a series of woods and roads before arriving at Faja do Ouvidor’s lava formed landscape. Don’t worry too much about food on the trip, as a picnic will be provided along the way.

Say goodbye to Sao Jorge and travel on a morning flight to Sao Miguel. This next island is treasured as the vibrant garden of the Atlantic thanks to its lush surrounds – hopefully you get a glimpse of this through the plane windows. Start your adventure in Sao Miguel with a free day exploring Ponta Delgada, the capital of the Azores. Perhaps wander along the seaside promenade, pick up a plate of bacalhau (dried and salted cod) at the farmer’s market in Mercado da Graca, or even sample some fresh seafood at the local restaurants.

San Miguel is home to some stunning scenery ¬– by the end of the day, this should be more than obvious. Take a guided walk to the west and central sites of the island, wandering over lagoons and volcanoes in this stunning green landscape. Begin the trip by visiting Arruda’s Pineapple Plantation located at Faja de Baixo. These glass greenhouses often take two years to grow the delicious fruit within – there might be an opportunity to snack on some during the visit. Next, travel past three sandy black beaches along the south coast while travelling by private transport before arriving at the city of Lagoa for a pottery demonstration. Depart for the other side of the mountain to the volcano of Fogo, enjoying spectacular views of the west-facing landscape. At the top of Pico da Barossa, stand in awe as you look down at Fogo’s caldera, home to a lake of the same name. After romping through a few more calderas, volcanic landscapes and vibrant plant-life, stop at picturesque downtown Ribera Grande for lunch. As the evening rolls in, enjoy a farewell dinner with the group. As far as Azorean cuisine goes, try to get cozido if you can ¬– this must have meat stew consisting of pork, beef, chicken, sausage and vegetables is typically cooked underground by a volcanic stream. Try cook that, Jamie Oliver.

Your adventures through Portugal and the Azores comes to an end today.