When the Batavia left Holland to sail to the Spice Islands as part of a fleet under the command of Francisco Pelsart, its skipper was Adriaan Jacobz.  It was carrying a total of 316 men, women and children, and part of the cargo were 12 chests of coin worth at today’s valuation some $30 million, plus a quantity of jewellery and silver.  Some of the ship’s ballast consisted of shaped sandstone blocks intended to form part of a watergate at Batavia (now Jakarta), this now being reconstructed and on display in Geraldton.  A substantial part of the ship itself has been recovered, conserved and is on display in Fremantle.

Jacobz had deliberately sailed this ship so as to separate the Batavia from the rest of the fleet.  His intention was with the help of some of the crew to seize the ship and its cargo when they sighted the Western Australian coast, and go pirating.

On the night of 4 June 1629 the Batavia crashed into Morning Reef in the Wallabi Group at the Abrolhos Islands.  Pandemonium ensured as the ship pounded on the reef, but it was not until daylight that people could see small nearby islands.  Forty people drowned while trying to swim ashore, but more than 250 reached shore on Beacon Island by using small ships’ boats and by clinging to floating wreckage.  Almost immediately Pelsart and Jacobz took 46 (mostly senior officers) and sailed to Batavia in one of the ship’s boats to organise a rescue vessel.

On Beacon Island the undermerchant Jeronimus Cornelisz (the person in charge of the commercial enterprise) became the leader of the survivors left behind.  He, along with some followers, decided to capture the rescue ship when it arrived from Batavia and sail away to become pirates as the original plan had been hatched.  Because of the shortage of food and water, and to get rid of any who were not useful to his plan Cornelisz decided to divide the people in to three groups. 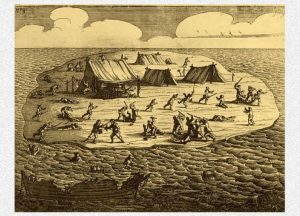 While some remained on Beacon Island, he sent some to Long Island and one group of 46 soldiers under the command of Wiebbe Hayes to West Wallabi Island with instructions to search for water. Cornelisz had presumed they would not find any water, die of thirst, and so be of no threat to his plan.  However, Hayes and his men found plenty of water, but when they signalled this news to Cornelisz it was ignored.

Meanwhile Cornelisz and his men had commenced to murder many of those who were of no use to them on both Beacon and Long islands.  One man escaped and managed to reach West Wallabi where he told Wiebbe Hayes of the massacres which were occurring.  Jeronimus Cornelisz sent some of his men to attack those on West Wallabi, but they were beaten off.  Cornelisz then went himself to propose a peace treaty, but was captured by Hayes who (rightly) did not trust him.

About this time Pelsart arrived in the rescue ship Sardam.  Hayes managed to warn Pelsart of the proposed attempt to capture the ship minutes before Cornelisz’s men arrived alongside the Sardam, so the mutineers were taken prisoner.

Altogether it appears that Cornelisz’s men had murdered 125 men, women and children during their reign of terror.  They were tried and, although he had not personally killed anyone, Cornelisz was the first to have both hands chopped off and then hung on a gallows on Long Island.  The gallows site has fairly recently been discovered.  Seven others were also hanged while the remaining mutineers were taken to Batavia for sentencing there, except for two who were marooned on the coast near the mouth of the Murchison River, possibly at Wiittecarra Gully. 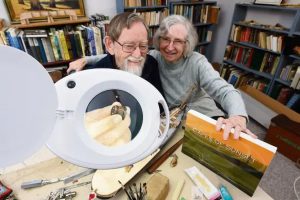 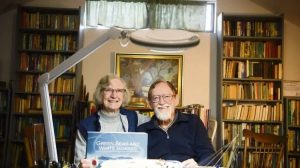 “Our involvement with the Abrolhos Islands goes back about 45 years.  While living in Geraldton we built two cruising yachts, Tevake, and, after that was sold, Panthalassa.  In these two yachts we often sailed with a crew of our young children to visit the islands where we had several adventures.

Through our association with the WA Maritime Museum we were also invited to take part in research activities.  We are both qualified divers and Peter has worked on the Batavia wreck site and took part in land searches.  Jill is a Maritime Archaeologist and we have both worked on the conservation of a number of Batavia canons which are now on display in Geraldton